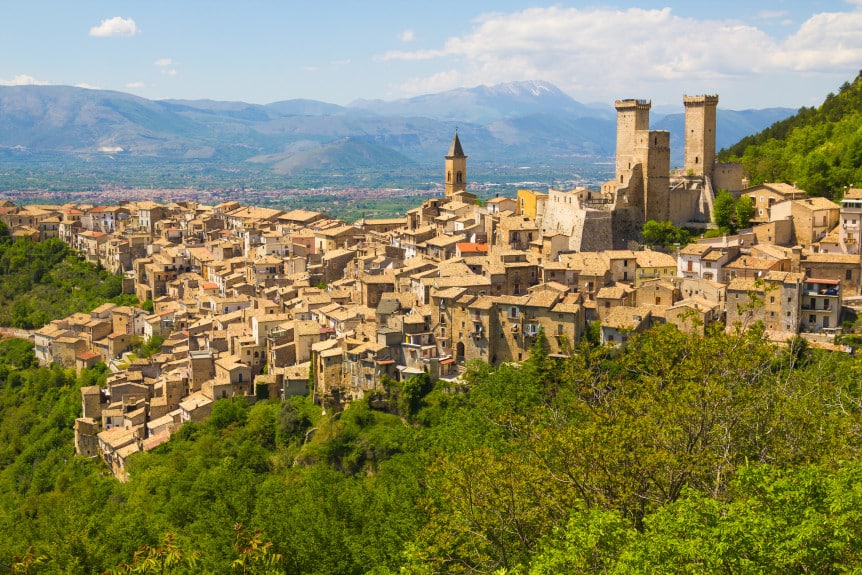 This article originally appeared in the February 2015 issue of Dream of Italy. Updated 2018.

First-time visitors to this highly overlooked city, located in the center of Abruzzo in central Italy, sense it immediately: there’s something very special about Sulmona. Maybe it’s the architecture — a little medieval, a little renaissance, a little baroque. Maybe it’s the food, which some say is the best in all of Italy.

Maybe it’s the fact that the city still resonates with the words of its favorite son, Ovid, one of the most celebrated poets of love. Maybe it’s that it has survived habitual earthquakes over the years and been made strong in spirit. I think it might be the confetti, which you see outside nearly every shop on the Corso Ovidio.

Confetti? No, not the shredded paper we think of stateside. In Sulmona, confetti means candy-coated almonds — and then some. Candy-coated almonds date back to the Roman times, when they were a must-have item for wedding and birth celebrations. In those days, they were made with honey.

In the 15th century, when cane sugar was introduced to Europe, Sulmona quickly took on a leadership role in the production of confetti, and the varieties have grown in number and importance over the centuries. There’s white and ivory for weddings and bridal showers; silver for 25th anniversaries and gold for 50th anniversaries; light blue or pink for baptisms, christenings and baby showers; red for graduations; green for engagements; and, more recently, lilac for same-sex marriages.

Most confetti starts with an almond — a very specific type of almond from Sicily called pizzuta di Avola. But whether it is an almond or one of a number of other centers (hazelnut, chocolate, candied fruit, pistachio) it still represents the “anima” or soul of the confection.

Then the magic begins. Sulmona boasts two fine confetti producers: William DiCarlo, which dates back to 1833, and Pelino, which is the older of the two, and the only one that does not use any starch in its recipe, holding to a more ancient tradition.

You can’t help but be taken in by the confetti in Sulmona, but there’s so much more to this gem that can honestly be called the “real Italy.” Sulmona is a city and comune of about 25,000 people in the province of L’Aquila. Abruzzo boasts the title of “Greenest Region in Europe” and in the area surrounding Sulmona, there are three national parks, one regional park and 38 protected nature reserves.

Resting in the Valle Peligna, Sulmona was built on a plateau that once held a lake, which disappeared in prehistoric times. In ancient times, it was one of the most important cities of the Italic tribe that lived in the valley. Hannibal invaded the valley in 211 BC, but apparently left the “Sulmo” alone.

Over the years, the city and environs suffered through many invasions, with Sulmona finally becoming a free comune under the Normans. When Sulmona was part of the Kingdom of the Two Sicilies in 1256, the Swabian King Manfredi ordered the construction of a medieval aqueduct, whose 21 gothic arches still stand in the main piazza.

In 1706, the medieval city was nearly destroyed by an earthquake, but some remarkable buildings survived, including the Church of Santa Maria della Tomba and the Palazzo Annunziata. Much of the city was later rebuilt in the prevailing baroque style of the 18th century.

Today it is a fairly quiet, yet vibrant city, which moves to its own beat. It is safe, small and eminently walkable, full of eye-catching architecture, cafes, restaurants, gelaterias, shops and friendly people..

Walk out to the mercato in Piazza Garibaldi any Wednesday or Saturday morning, and you will be blown away by your location among the Majella mountains. Snow-capped for most of the year, they provide a stunning backdrop for the activities in the city, from the Easter Sunday celebrations (when thousands come to witness La Madonna che Scappa) to the joust (Giostra Cavalleresca) in July.

A Walk Through Sulmona

When you head out from Sulmona, don’t be surprised by the shepherds with their white sheep dogs and flocks, as Sulmona sits among the most important sheep trail in Italy. Here are three side trips you shouldn’t miss:

A 30-minute drive southwest, Scanno earned its wealth from flourishing sheep farming and related industries, and is today known for its vast cheese production and unique filigree jewelry. Go to Armando DiRienzo for beautiful examples of traditional filigree work. If you’re lucky, you’ll see one of the 25 women who still wear the traditional black dress, homemade lace and flat headdress.

Head about an hour northwest to Santo Stefano di Sessanio. Set up on a steep slope that straddles two valleys, Santo Stefano is a fortified village that offers both gorgeous views and remarkable architecture. The Medicis were here, and the “medicea,” their round embattled tower, is still a focal point in the town.

Not far from Santo Stefano is Rocca Calascio, a mountaintop fortress, or rocca. With an elevation of nearly 5,000 feet, it is the highest fortress in the Apennines and well worth the walk up.

Linda Dini Jenkins is a freelance writer and photographer and blogs about travel at www.travelthewriteway.com. She plans small group tours to Italy and will be going to Abruzzo in July 2015.

For more information, visit www.welcometosulmona.com, the only English-language guide to Sulmona and the Valle Peligna.

Where to Stay
La Casa del Cuore
Via Pescara, 18
(39) 0864 210670
missgiannantonio@yahoo.it
Rates: Price negotiable according to length of stay.
Live like a local at Novelia’s penthouse on the top floor of a classic Italian townhouse. Innkeeper, tour guide, chef extraordinaire, Novelia will take good care of you. This full apartment sleeps six with two bedrooms and two bathrooms.

Hotel Ovidius
Via Circonvallazione Occidentale
(39) 0864 53824
ovidius.hotelsantacroce.com
Rates: Doubles from 115€ per night.
A traditional hotel with its own restaurant and spa. Franco at the front desk makes the best latte macchiato you’ll ever have.

B&B La Dimora
Corso Ovidio, 238
(39) 0864.567759
www.bandbladimora.com
Rates: Under 100€ per night for singles and doubles; triples are 105€.
A lovely hideaway in the historic Palazzo Sanità right on the main corso. Proprietor Oscar calls it a B&B boutique accommodation; you’ll call it home.

Hostaria Dell’Arco
Via Manlio D’Eramo, 60
(39) 0864 210553
www.facebook.com/hostariadellarco
The best place in town for an antipasto buffet, and the veggies are to die for. Family run. You can’t miss. By Porta San Antonio.

Taverna dei Caldora
Piazza Umberto I, 13
Pacentro
(39) 0864 41139
www.facebook.com/TavernadeliCaldora
Worth the prices and the trip to nearby Pacentro. Favored by poet Gabriele D’Annunzio; George Clooney’s eaten here, too. The food — local lamb, cheese and fish –and scenery conspire to make you want to stay forever. Closed Sunday dinner and Tuesday.