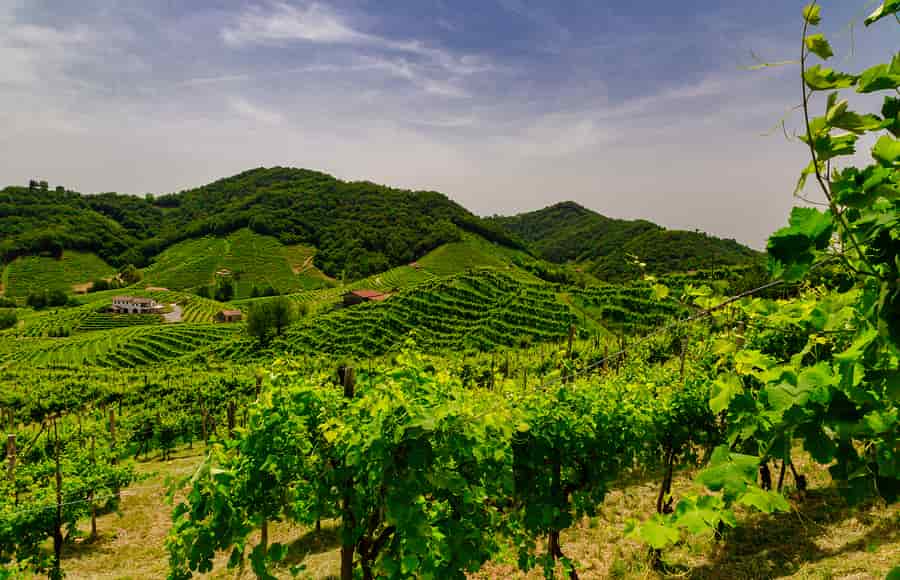 2020 is the perfect time to visit Italy’s Prosecco country and toast to the region’s new UNESCO World Heritage Site status with a bellini or a spritz. Officially added to the World Heritage list in July 2019, the area comprises nine provinces in the Veneto and Friuli-Venezia Giulia regions northeast of Venice, where 15 towns produce the sparkling white wine under DOC and DOCG appellation.

Prosecco grapes, also known as Glera grapes, grow in neat rows oriented horizontally and vertically across the verdant green hills. According to its UNESCO nomination, “The landscape is characterized by ‘hogback’ hills, ciglioni – small plots of vines on narrow grassy terraces – forests, small villages and farmland. Since the 17th century, the use of ciglioni has created a particular checker board landscape consisting of rows of vines parallel and vertical to the slopes. In the 19th century, the bellussera technique of training the vines contributed to the aesthetic characteristics of the landscape.”

Winemakers have cultivated Prosecco grapes in these hills for centuries, passing down the tradition and techniques through the generations. The area’s geology and soil are said to contribute to a superior-tasting wine. Like French Champagne, Italian sparkling wine can only be called “Prosecco” if it is grown and made in these hills.

The new status is welcome news, as the Prosecco region has been in the running to become a World Heritage Site for 10 years. The Prosecco-producing Conegliano and Valdobbiadene hills are Italy’s 55th World Heritage Site, putting the country on equal footing with China for the world’s most sites in one country. It is the 10th site worldwide to reach “cultural landscape” status for the unique way the environment and humans interact.

The new designation is expected to boost tourism to the region and Prosecco sales in the near future, which rose 6 percent in 2018 to 460 million bottles. As 75 percent of Prosecco is exported, you’ll have a way to celebrate even if you can’t make it to Italy.

For more information on wineries, the region and history, visit the Prosecco Consortium of Italy at: www.prosecco.it