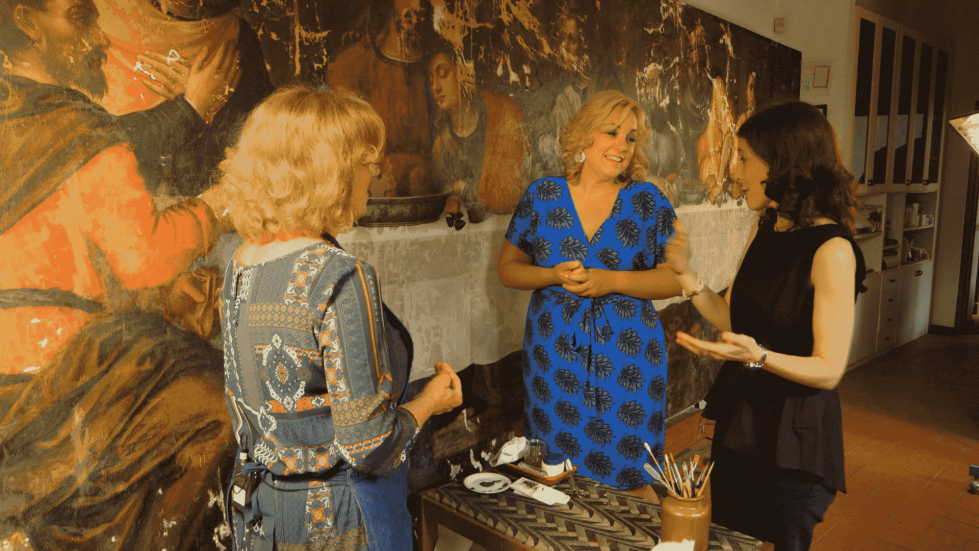 Renaissance-era nun Plautilla Nelli became the only known woman to paint the Last Supper in 1528. Dream of Italy documented the painting’s restoration in the Florence episode of the Dream of Italy TV series on PBS – and now the four-year restoration is complete.

This fall the painting was returned to the Santa Maria Novella complex; it hangs in the museum’s Old Refectory across from another Last Supper painted by Nelli’s contemporary Alessandro Allori. This is the painting’s first public home in 450 years, and it will stay on display permanently.

At a time when women in Italy were barred from becoming professional artists, Nelli (1521-1588) broke barriers. Discarding social norms of the time, she founded a workshop for female artists and fellow nuns in her convent in Florence, creating and selling religious paintings to wealthy Florentine nobles. Because these customers paid the convent and not the artists directly, the nuns were among few women of the time to receive money for their artwork.

“These women were able to take care of themselves as entrepreneurs would”, says conservator Rossella Lari, whose diligent work was featured in Dream of Italy’s Florence episode. “Florentine gentlemen wanted [Nelli’s] paintings because they would use them for private devotion in their own chapels. People thought that at the time, in the Renaissance, a painting by a nun would have mystical qualities.”

The 21-foot-long version that Nelli created in 1568 was as remarkable then as it is today. The Last Supper, featuring difficult technical and compositional subject matter, is traditionally painted by male artists as a capstone to their careers, but Nelli completed it despite not having any formal training. Further, she was the first female painter to sign her artwork.

Women weren’t allowed to study anatomy, yet Nelli painted a life-size Jesus and his 12 apostles with emotive expressions. Where many Last Suppers are frescoes that depict grand feasts, in Nelli’s – an oil painting on canvas – the food is a simple meal of lamb, bread, lettuce and fava beans, with bread and wine for every apostle, laid out on an ironed tablecloth. This attention to detail was, at the time, a feminine touch.

Her painting was damaged in the Florence flood of 1966 and has been undergoing restoration since 2015, when crowdfunding campaigns were launched to contribute funds toward the $220,000 project. Several Florentine entities also supported the restoration, including the city of Florence and Advancing Women Artists, an organization dedicated to preserving paintings by female Florentine artists.

“We restored the canvas and, while doing so, rediscovered Nelli’s story and her personality. She had powerful brushstrokes and loaded her brushes with paint. Reflectography revealed very little under-drawing… Plautilla knew what she wanted and had control enough of her craft to achieve it,” says Lari.