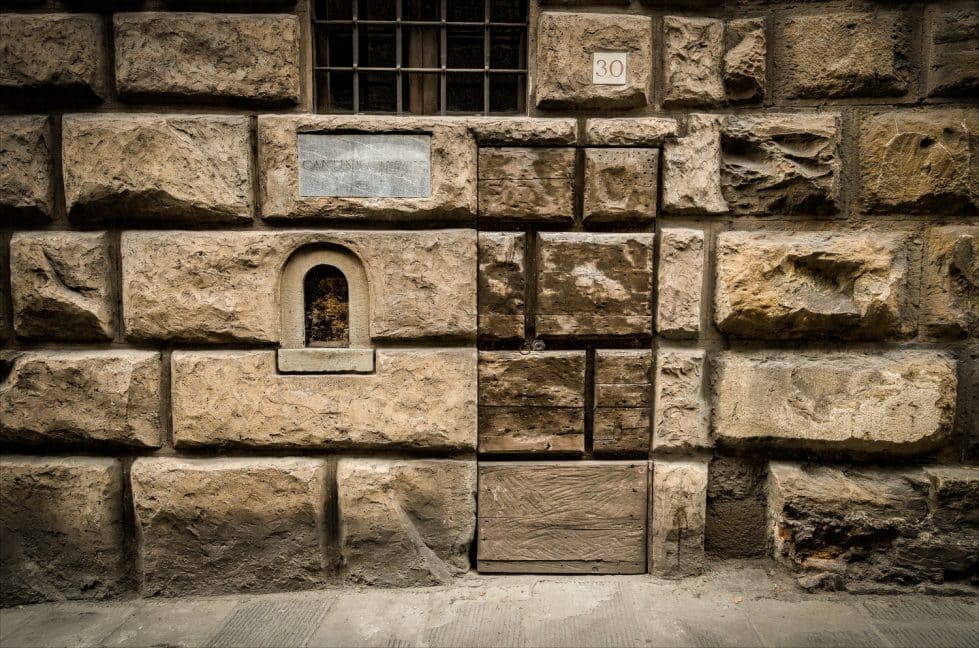 Florence’s proximity to some of Italy’s most celebrated wine country, combined with the many noble families who resided in the city, has contributed to a charming tidbit of history: Florence’s buchette del vino, or wine windows. Hidden in plain sight, these wine windows look like small, arch-shaped cutouts in the walls of former villas around the city. Since 2015, an effort by local restaurants and the Florence Wine Windows Association has led to the restoration and reopening of wine windows around town. Now, on November 9th, an art exhibit titled Obiettivo Buchette: Photographing the Wine Doors will open at Florence’s Teatro della Pergola (Via della Pergola, 12/32 – enter at Caffe Guidi), showcasing a collection of photographs of the wine windows.

Though many of the 167 original windows are now defunct, relegated to the bygones of history, a small handful have reopened in Florence to serve wine to the public. We devoted an entire article in our October 2019 issue about these windows and how to see them.

Florentine nobility, many of whom had countryside estates in the surrounding areas, produced their own wine and olive oil for centuries. In 1559, the ruling Medici family began allowing these wealthy families to bring the wine and oil from their countryside cellars and sell it out of their homes in Florence from the wine windows. The public would bring their own containers to the villa, ring the bell on the wine window, and have their containers filled with wine by a cantiniere on the other side.

The photographs in the art exhibit, by Andrew Barrow and Robbin Gheesling, invite history buffs, wine lovers and curious tourists to learn more about the wine windows and see their different shapes and sizes. The opening event takes place from 5:30 to 7:30 p.m. on November 9, and the photos will remain on display at the theater until January 2020. It is hosted by the Wine Windows Association and Wine Doors Florence, Gheesling’s street photography project that aims to showcase and preserve the forgotten wine windows through photos. She and Barrow have both dedicated extensive time to documenting the wine windows to bring attention to them. –Elaine Murphy