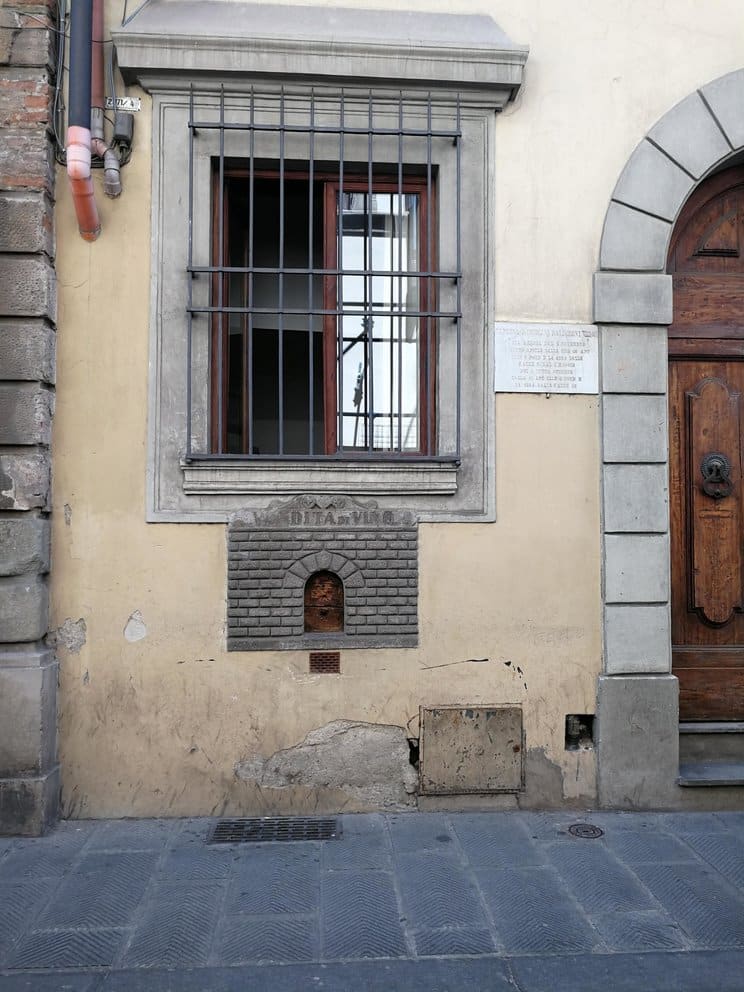 This article originally appeared in the October 2019 issue of Dream of Italy.

Walking around the historic center of Florence, you are sure to notice strange, small cutouts in the walls of the old large family homes. They are called buchette del vino, referred to in English as “wine windows” or “wine doors.”

Originally, the Nobile families in town also had estates out in the countryside, where they produced wine and olive oil. In 1559, the ruling Medici family began allowing these wealthy families to bring the wine and oil from their countryside cellars and sell it out of their homes in Florence — directly from farm to table.

Customers — including any Florentine, not just nobility — would bring their own bottles and ring the bell, and the maid, called a cantiniere, would come and fill it for them. These were the first wine shops, and they were ubiquitous by the 19th century. Back then, they included a vinaio, a place to drink a glass of wine while eating light snacks.

Due to a combination of property sales, World War II bombings and the Florence flood of 1966, wine windows began disappearing in the 20th century. Some are now mail slots, others doorbells to the multiple apartments inside; some of the villas in town still have the former operating hours listed on the now-defunct windows. However, several of these wine doors are still operable in restaurants and wine bars around town.

For several years now it has been possible to buy vino sfuso, which translates literally to “loose wine” —
that is, wine that doesn’t come prepackaged — in bulk, saving a lot of money. During operating hours, you can come up to the windows and have the attendant fill your wine bottles, flasks or demijohns with wine.

When Babae, a new bistro, recently opened in the Oltr’Arno on Via Santo Spirito, it also reopened the building’s wine window, one foot by eight inches in size. From 7 to 8 p.m. they sell a gottino (like a tumbler) of wine for 3 euros. You come from outside and ring the bell, and on the inside, someone will come to serve you the wine. More of an Instagram photo op, but based on tradition!

In 2015, the Wine Windows Association was formed in Florence to document, preserve and promote the buchette. They have created an online map and a print version for those who would like to discover the wine windows around town. In 2004, the first book on the subject came out in Italian, Le Buchette
del Vino a Firenze nel Centro Storico ed in Oltrarno by Lidia Casini Brogelli. Another book in Italian was printed in 2005, I Finestrini del Vino by Massimo Casprini.

Here is a list of some of the more famous wine windows in town. It is like a treasure hunt to find them!

Babae
Via Santo Spirito, 21/r
This is the small bistro with the wine door open from 7 to 8 p.m. (The “R” in the address means Rosso or “Red,” but some homes have blue numbers on them.)

Vivoli Gelateria
Via Isola delle Stinche, 7r
You can view this wine door from both the outside and the inside.

Il Latini Ristorante
Via dei Palchetti, 6/r
This was the wine cantina of the Palazzo Rucellai.

Buca Lapi
Via del Trebbio, 1r
This was the wine cantina of the Palazzo Antinori.

Judy Witts Francini is a culinary concierge, market maven, Italian life coach and cooking teacher who has lived in Italy since 1984. For more information, visit www.divinacucina.com.