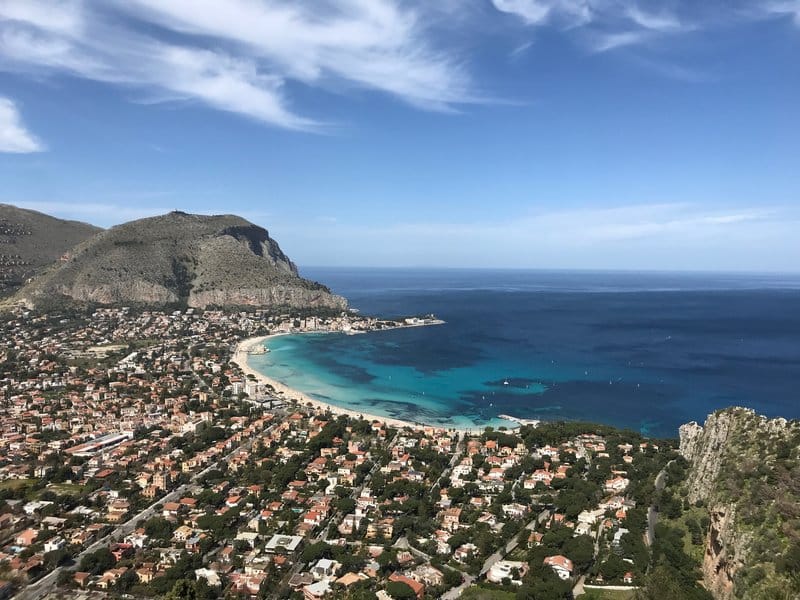 Our March 2019 issue is a special report on the city of Palermo by Sicily expert Sarah Murdoch. While the city is worth a few days of exploration, its also great to use as a home base for a longer trip exploring the west of Sicily.

Day trips can take you as far as Agrigento, and there are also great sites to visit on the edges of the city limits. Packaged day tours are available to every corner of the island, but you’ll find these destinations to be easy do-it-yourself excursions by public transportation.

Palermo’s premier sight isn’t actually in Palermo, but in the city just above, Monreale. A large cathedral and cloister sits on the edge of the hill, overlooking the Conca d’Oro, the golden valley of Palermo. Monreale’s cathedral was built in the 12th century by the Norman King William II as a challenge to the growing power of Palermo’s archbishop. The style of the architecture is a great symbol of the Norman style of rule in Sicily, a fusion called “Byzantine-Arab-Norman” art. The interior of the church is decorated with a profusion of elegant Byzantine mosaics in golden glass, with Arab artistic patterns on the lower walls. The cloister is great for a meditative stroll, while admiring carved column capitals, each telling a unique story.

How to get to Monreale: From Piazza Indipendenza (near the Norman Palace) take bus #389, about 30 minutes depending on traffic. Taxis are also available, from 20-30 euros each way—negotiate and write down a price.

Beach bums will enjoy a break from the big city at Palermo’s beach. Situated just to the west of downtown, on the other side of Monte Pellegrino, Mondello has aquamarine waters, golden sand, and teenagers in swimsuits on motorbikes every warm day. Even if you’re not interested in sunbathing, the village of Mondello is an old-timey seaside resort, and a great place to have an atmospheric seafood feast.

How to get to Mondello: From Piazza Sturzo (near Teatro Politeama) take bus #806, about 40 minutes. Taxis will get you to the beach for about 30 euros each way.

During Palermo’s version of the Belle Epoque of the 19th century, a small population of wealthy Englishmen lived in the city. Most were involved in the trade of Marsala wine, which had become all the rage in England. The Whitaker family built an elegant estate on the outskirts of Palermo, filling their home with eclectic collections and artwork. A walk through the home and gardens gives a glimpse into the lifestyles of the rich and foreign in Sicily.

How to get to Villa Malfitano: Take bus 106 from Piazza Sturzo, near Teatro Politeama, about 20 minutes.

Just a short train ride from Palermo, this charming fishing village makes a perfect vacation from your vacation. Visit the Arab-Norman cathedral, climb up to the Rocca for dramatic views of the coast, eat a fishy dinner, or chill on one of the best white sand beaches on the island.

How to get to Cefalu: Trains depart hourly from Stazione Centrale, the journey is about 1 hour.

Agrigento showcases some of the best, most preserved architecture from ancient Magna Graecia. The Valley of the Temples clings to a ridge near the sea, stringing together a series of temples in various states of preservation. The archaeological museum is small, but brings the area to life. The town itself is easily accessible from the train station and is worth a wander.

How to get to Agrigento: Trains depart hourly from Stazione Centrale, the journey is about 2 hours.