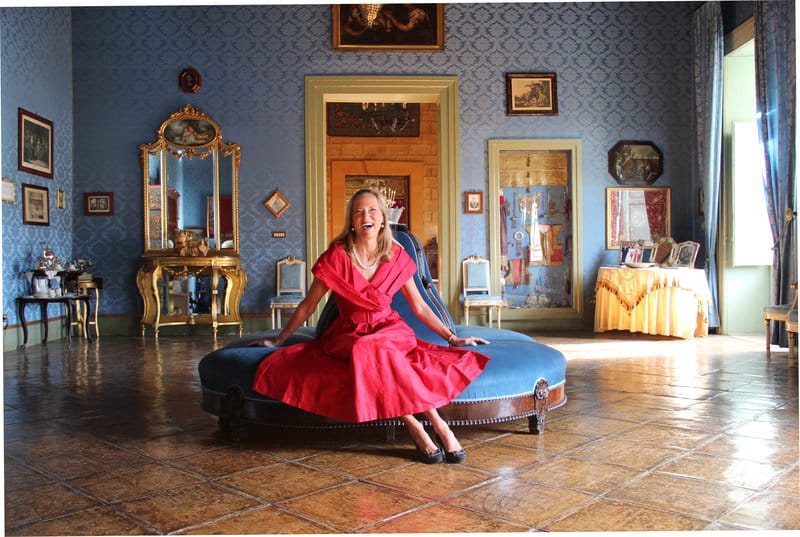 This article originally appeared in the March 2019 issue of Dream of Italy. Join Dream of Italy as a member to access this issue and 180+ back issues.

Palermo was ruled for centuries by a noble class. A stroll around the city reveals palace after palace, as wealthy landowners built elaborate city homes here for generations. The unification of Italy in the 19th century began the slow decline of the aristocracy, which was documented in the famous Sicilian novel, The Leopard by Giuseppe Tomasi di Lampedusa. The abolition of the monarchy after WWII was the final blow, and over time many families were forced to abandon their homes which they could no longer afford.

Today, however, one of the most historic families still remains, living in their 800-year-old palace built on the ancient Carthaginian walls of the city. The Conte and Contessa Federico maintain their rambling old home in the center of the Ballaro neighborhood, filled with family heirlooms and a lived-in warmth.

Conte Alessandro is a race car driver and a descendent of the Holy Roman Emperor Frederick II, one of the most colorful personalities from Sicilian history. His wife is the energetic and vivacious Alwine Federico, an Austrian opera singer, champion swimmer and teacher, whom the conte met at a ball in Rome in the early 1980s.

“In the beginning (people in Palermo) were quite suspicious and watched me constantly: How is it that the count didn’t find a nice Sicilian girl? It took them a while to accept me. Now I’m notorious not as the countess, but as the ‘long, skinny one who rides the bicycle’ and this is a good sign,” the countess says.

The biggest change the contessa has seen in her years in Palermo is security for women.  “When I first arrived in 1983 it was impossible to move around in the evening by yourself, or even with a group of friends …sometimes even during the day. Now the city has improved very much because we have more lights in the streets, more people in the streets (pedestrian areas!) and also the mentality has changed. Le donne possono uscire,” she notes, meaning “women can go out.”

The Contessa and her sons, Nicolo and Andreas, offer tours of their historic home. Her down-to-earth approach to her position is refreshing and honest, giving a fascinating glimpse into life in a palace. She might share with you what she likes least about life in a palazzo: Lack of heating in the winter. “Our palazzo is a national monument, so you can’t change anything,” she laments.

You will hear stories of famous visitors, climb their ancient tower, and get a glimpse of the Count’s “man cave” where he displays his race car driving trophies.

Tours lasting 45 minutes are held Tuesday to Thursday, 11 a.m. to 4 p.m.
No need to reserve ahead. Admission with a guided tour is €10.