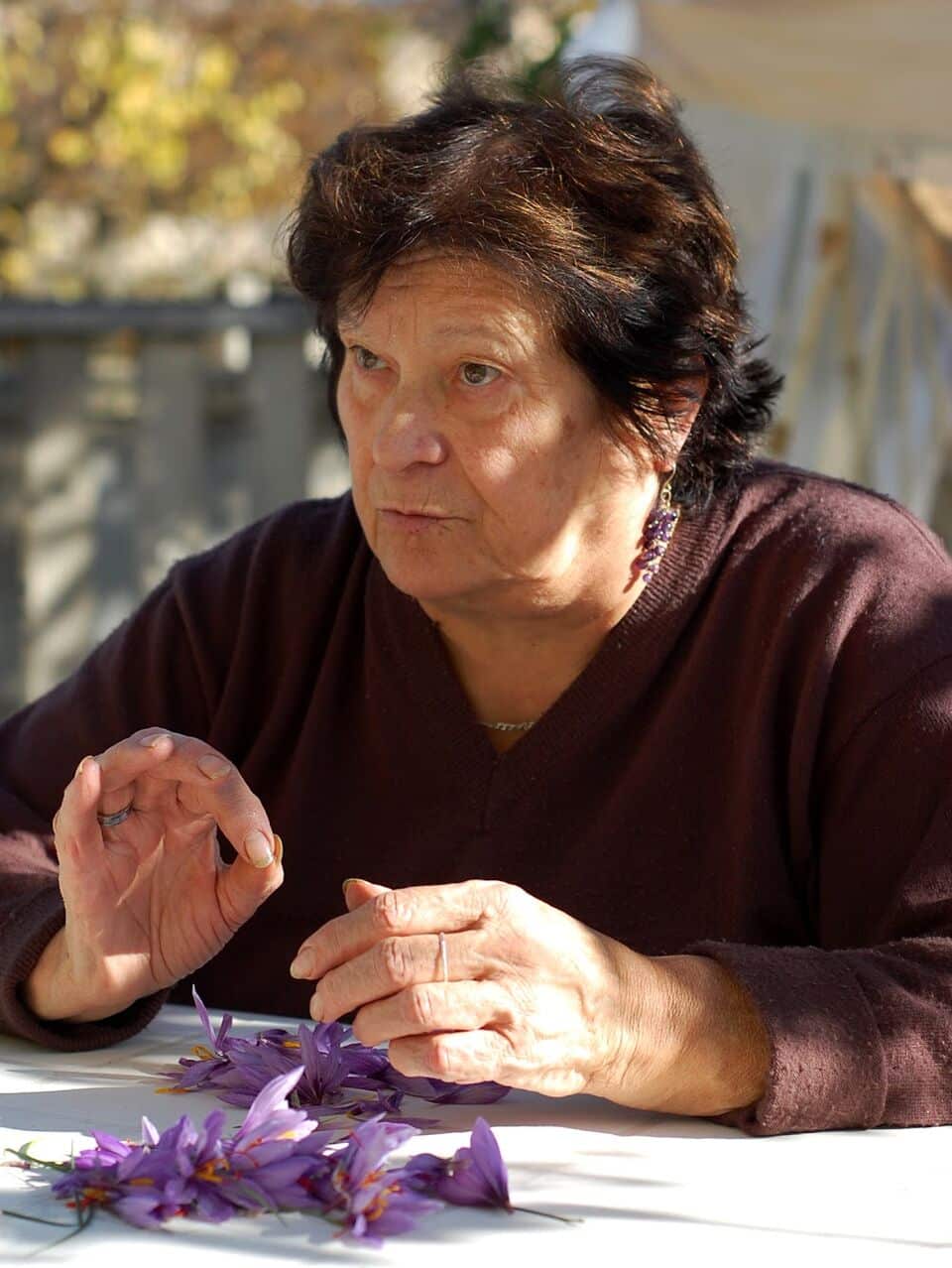 We were saddened to hear of the December 2018 passing of Gina Sarra, whom we featured in our May 2018 issue. Signora Sarra is remembered as someone who held high the traditions of cultivating saffron and treated the “red gold” with great respect. She was and is a symbol of hope for the future of saffron production in the Navelli plateau of Abruzzo.

An excerpt from our May 2018 article The Strong and Kind People of Abruzzo:

Gina Sarra picked saffron for the first time at the tender age of three. It was a crisp October morning and the little girl was sleepy and shivering so her mother beseeched her to mimic the very crocuses they were picking: “When you get cold, put your arms inside your sweater and hug yourself just like the flowers do.” And from that moment, Gina’s saffron story began.

“The Sarra family has always worked in saffron,” says 79-year old Gina in a booming voice as she pours saffron tisana and serves slices of freshly baked ciambella in her little kitchen. For the 98 small saffron producers from 13 different villages in Abruzzo’s Navelli plateau, the cultivation of saffron has been a way of life and a labor of love for centuries. In fact, in 1971, Gina’s brother Silvio formed a union to protect local saffron farmers from unfair market competition called the Cooperativa Altopiano di Navelli.

At Gina’s urging, Silvio introduced the world to Abruzzo’s oro rosso – red gold – via a popular television program which over time led to numerous culinary accolades for Navelli’s prized saffron including the holy grail for food producers – DOP certification, the highest distinction that a food in Italy can be afforded.

Gina is a natural storyteller, who, despite having lived in the little village of Civitaretenga her entire life, clearly knows how to work a crowd. After all, she’s had her share of practice. She is regularly visited by chefs and food cognoscenti from around the globe. “Gina e’ internazionale (Gina is international),” a neighbor chides. Her phone rings off the hook with calls from visitors who seek her as much for her stock of fragrant Navelli saffron as for her infinite knowledge about the spice.

“In October, the flowers are collected – strictly by hand, one by one – early in the morning before the sun opens them,” explains Gina. “From one hectare of cultivated land we obtain – if all goes well – one kilo of dried saffron. In that kilo are 250,000 flowers and over 500 hours of work.” Navelli saffron’s hefty price tag of approximately 25€ per gram reflects the manual labor involved in its cultivation and production as well as the Cooperativa’s guarantee of quality and authenticity.

But Gina hasn’t slowed down; saffron – despite all its toil – is who she is. It is rumored among her neighbors that Gina keeps a tattered sheet of paper on which she proudly recorded her personal best records both for raccogliere – picking the crocuses – 1,623 flowers picked in 12 minutes, 18 seconds, and for the number of crocuses sfiorati – stripped of the pistils that will ultimately become saffron threads – 1,000 in one hour, 4 minutes, 23 seconds.

Is it true? She may never tell, but with a twinkle in her eye and over a final sip of saffron tea, she fondly recalls, “When I was a child and was tired after a long day’s work, my grandmother would tell me, ‘Dai, keep going and I’ll buy you dried figs.’ But I’m still waiting for those figs!”

Find out more at: www.zafferanoaltopianonavelli.it.