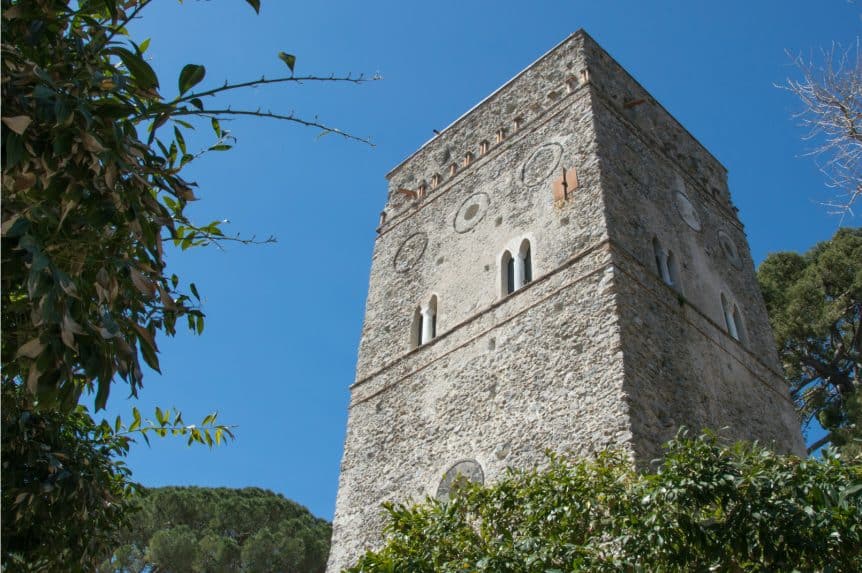 This article originally appeared in the September 2017 issue of Dream of Italy. Updated 2018.

In Ravello, a place already famous for its views, a new vantage point is drawing a lot of attention – and for very good reason. Visitors to mountaintop Ravello will know the beautiful Villa Rufolo gardens and the iconic panorama overlooking the Amalfi Coast. After a lengthy renovation, the Villa Rufolo’s tallest tower, the Torre Maggiore, has been transformed into a new museum.

Constructed in the late 13th century along with the majority of the villa, the Torre Maggiore soars almost 100 feet above the gardens. This makes it the highest viewpoint in the historic center of Ravello, but one that has only ever been enjoyed by a select few. That is, until earlier this year, when the tower was reopened to the public as the Torre-Museo.

However, a visit to the Torre-Museo is about much more than the incredible view from the top. Rather than simply a means to an end, the climb to the observation platform has been envisioned as a journey through time and space. Climbing from one level to the next takes visitors back in time and highlights the history of the Villa Rufolo in a way that is often missed on a simple stroll through the gardens.

Although the tower is 1,000 years old, the museum uses lights, sound and special effects to create a multi-sensory and utterly modern experience. Since the Medieval tower has very few windows, the dark setting has been enhanced with the creative use of video projections and unique light displays.

Stepping into the first dark level of the tower, the story begins with a virtual greeting from Sigilgaida Rufolo, a noblewoman of the wealthy Rufolo family, who created the grandiose estate in the 1200s.

Climbing up to the next level, visitors come face to face with Sir Francis Neville Reid, the Scottish nobleman who bought the villa in complete ruins in the mid-19th century and spent his life restoring the property. A short film shows Reid recounting his great love of Ravello and the Villa Rufolo, which was preserved in large part thanks to his investment of time and care.

He also shares about the now famous visit from Richard Wagner in 1880 and how the great composer found inspiration for the magical gardens of Klingsor in his opera Parsifal among the exotic flowers and romantic terraces of the Villa Rufolo.

Continuing the climb to the top of the tower reveals uncovered treasures around each twist and turn in the modern glass staircase. Ancient coins, ceramics and marble statues that were all found at the Villa Rufolo are featured along the way. The staircase itself is an elaborate work of art, its zigzagging design reminiscent of an M.C. Escher design.

Finally, a ray of light comes into view and the steps open to a glass-enclosed viewing platform. Take in a 360-degree view overlooking the Villa Rufolo and Ravello with views along the coastline and across the Bay of Salerno.

It’s a remarkable experience to take in the vista in the same spot where the Rufolo family once surveyed their vast property and where Sir Francis Neville Reid once gazed upon the ruins of the property he worked so painstakingly to restore.

After visiting the Torre-Museo, time spent meandering through the gardens takes on a deeper meaning – seeing it as a home, an architectural jewel, and a dream to preserve.

Torre-Museo
Villa Rufolo
Piazza Duomo
Ravello
(39) 089 857621
www.villarufolo.com
Admission: 9€ including admission to villa and guide visit of Torre-Museo. Villa Rufolo offers guided tours of the Torre-Museo daily, but only with advance booking. While Villa Rufolo is open longer hours, the Torre-Museo is open daily from 10 a.m. to 5:30 p.m. From 6 p.m. it is only possible to enter with a reservation for a guided visit.