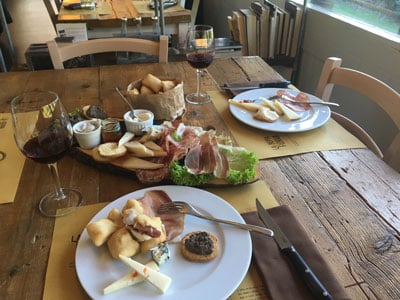 This article originally appeared in the March 2018 issue of Dream of Italy. Get the recipe for tiramisu here.

Many first-time visitors to Florence stay and eat around the main sights and museums, which are concentrated on the north side of the Arno River. Unless visitors head across the Arno to the Pitti Palace and Boboli Gardens, they often miss a treasure trove of winding streets, artisan shops, excellent restaurants, and great wine bars. This area on the other side of the river is known locally as the Oltrarno.

My mission: To take you on a virtual walking tour of the Oltrarno area of Florence, introducing a traditional or Tuscan dish in each spot along the way. It is a progressive meal in print. And while we’re together, why not learn to make a dessert at home for your friends and family?

This fun restaurant is tucked away in San Niccolo, far from crowds and the trappings of tourism, yet a convenient place to stop for lunch or dinner on your walk down from scenic Piazzale Michelangelo.

La Beppa Fioraia serves food that is not only good to eat, but equally gorgeous to look at. Facing an olive grove, it conjures up a feeling of warmth and coziness and it is bursting with natural light.

The restaurant’s name, La Beppa Fioraia, is an homage to a florist who would give a flower and a smile to workers she encountered in San Frediano, and tell them “this is for you, keep it safe.” She was admired for her simple elegance, her generosity, and her contagious optimism. Like the friendly florist, this quaint restaurant aims to share a bit of happiness.

As the owner, Monica Serafini, explains: “We do things with our heart, and we love what we do.”

Executive Chef Leonardo Borghesi shines with his pasta and main courses, a beautiful union of traditional ingredients, often prepared with an unexpected twist.

Though the whole menu offers enticing choices, I’m highlighting the Beppa Fioraia for their antipasto since their taglieri (cutting boards adorned with various specialties) are abundant, balanced, and offer a variety of classic, local and regional specialties.

La Beppa goes nicely with a 2015 Riecine Chianti Classico. It isn’t easy to pair one wine with so many flavors and textures, but Monica recommended this wine and it truly complimented the antipasto.

A few steps from the Church of Santo Spirito, Trattoria la Casalinga opened in 1963 and is still operated by the same family. Brother and sister team Andrea and Cristina run the dining room while their uncle Paolo is at the register, acting as a sort of gatekeeper who guards access to a land of excellent yet surprisingly affordable food. Mom and Dad, Graziella and Ferruccio, are in the kitchen. Graziella is the heir to recipes that date back to the opening of the restaurant by her parents and in-laws.

Graziella is referred to as the “Marascialla,” or marshall, and she rules the kitchen with passion and poise. Though she is over 70, Graziella darts around doing things usually assigned to the staff in other restaurants, but she knows only she can live up to her strict standards. I can barely catch a photo of her standing still, so instead I decided to photograph her moving about and unposed.

I’ve had many excellent meals at Casalinga, but when I think of a pasta in Florence that I truly crave, Graziella’s tagliatelle with duck ragù comes instantly to mind.

I once dated a Tuscan whose mom was and will likely always be the best at making ragù di nana (duck). When we broke up, my friends even cried, mourning our loss of her duck ragu. It was so good that I generally turn my nose up at the duck ragù I try while eating out. For this reason, I was ecstatic when I first tried Graziella’s, which is by far the best I’ve had in any restaurant in Florence, and fills the duck ragù void left from that historic breakup.

It isn’t always on the menu, since Graziella will only make it when she finds excellent duck to work with, and because duck is such a laborious ingredient to use in sauces.

I called ahead and planned my week around this plate of glorious pasta. Andrea, who has a talent for hospitality, made sure I’d find a plate of tagliatelle waiting for me. He served a 2013 Chianti Classico Calcinaia di Conti Capponi, which went beautifully with the duck ragù.

If your time in Florence is limited, you may have to cross your fingers and hope you are lucky enough to to snag a plate of tagliatelle al ragù di nana.  Otherwise, on a cold day order the tortellini in brodo (tortellini in broth) to warm up. Their steaks are reliably good, as are the more old-school dishes, like liver, or boiled tongue with green sauce.

It is hard to have a bad meal at Trattoria La Casalinga. Graziella just wouldn’t accept such a thing!

Just off the Arno, you’ll find Badalì, which opened in December of 2017. Nicola Schioppo, who once wanted to be a dentist, was eventually lured by his love of food to become a chef.

Kathy McCabe herself urged me to go here and try the stewed beef dish that, surprisingly, neither of us had heard of before she tasted it at Badalì. Lo Stufato di San Giovanni is tender beef stewed in a blend of spices you can only buy in a few drogherie, apothecary-type shops, in San Giovanni Valdarno.

Getting its name from this town further south in Tuscany, but not very far from Florence, the dish is as much a part of the identity of San Giovanni Valdarno as sourdough bread is to the residents of San Francisco. It has several names, but the most commonly used names are Stufato di San Giovanni, Stufato del Castel di Sangiovanni or Lo Stufato alla Sangiovannese.

Call the dish what you like, but the spice mix referred to by locals as the drogo, is a secret recipe. From what my palate could decipher, I’d wager there are black and white pepper, cloves, nutmeg, and licorice, but the exact blend of spices is only known by very few in San Giovanni Valdarno.

They suggested a 2015 Fattoria Rodano Chianti Classico as a pairing, which was a nice wine but I’d opt for a vintage with a little less alcohol, since it was in competition with the spices. This is a tricky dish to pair wines with, as one doesn’t know the exact spices used in the mix.

I didn’t get to try much else — since the stufato is quite filling, and I devoured a basket of bread for an almost mandatory scarpetta in the sauce, but I’ll certainly return to try more at Badalì.

Celebrating its first year in March of 2018, but not new to town, Osteria dell’Enoteca was created by Enoteca Pitti Gola, a popular but tiny enoteca across from the Pitti Palace. Faced with increasing demand and limited space, the Enoteca team branched out and opened a restaurant with room for more guests, while still serving high-quality food and wine.

Osteria dell’Enoteca is in a spectacular location, offering a reasonably priced menu that changes monthly to feature fresh, seasonal ingredients that are sourced locally. The produce is delivered from just up the road and meats come from historic butchers in Tuscany.

It is hard to choose what to order from such a sumptuous menu, dotted with dishes like fresh double-yolk pastas, crespelle (Florentine crepes), local game and Italian beef. This is a menu Catherine de’ Medici would have been proud to serve, but is still affordable and graciously offered in an elegant space with attentive service.

I’ve chosen Osteria dell’Enoteca for their dessert because it pleasantly surprised me the first time I dined there. The dish blends classics Tiramisú and Cantuccini with Vinsanto (biscuits with wine) to make a much more interesting dessert. Simply put, the entire meal I had here was incredible, and I was stuffed, but I still ate two portions of this tiramisù!

When Lorenzo saw my enthusiasm his face lit up, and he told me the story of how this dessert was born. Years back, Lorenzo had to stop drinking coffee, which is a key ingredient in traditional tiramisù recipes. His mom promptly traded the savoiardi dipped in coffee with cantuccini dipped in vinsanto, and this brilliant Tuscan-Italian hybrid was born. Though I wasn’t able to snag the official recipe, I did get some pointers that I will share with the recipe I’ve included.

Hats off to Chef Nicola Chiappi, and owners Edoardo Fioravanti, Manuele Giovanelli, Lorenzo Ricci and Zeno Fioravanti, as well as the director of The Wine Club, Shannon Fioravanti, who assists both the Enoteca and the Osteria.

We’ve visited a Florentine neighborhood through its cuisine, and through some of the people who dedicate their lives to sharing local food and protecting its integrity. After all, isn’t that the best way to learn about a place?

Antoinette Mazzaglia, of Taste Florence Food and Wine Tours, has lived in Florence for more than 15 years. She spends most of her time trying new places, testing recipes and tasting wine — and the remainder of her time with her Welsh Terrier, Teddy. For more information, visit www.tasteflorence.com