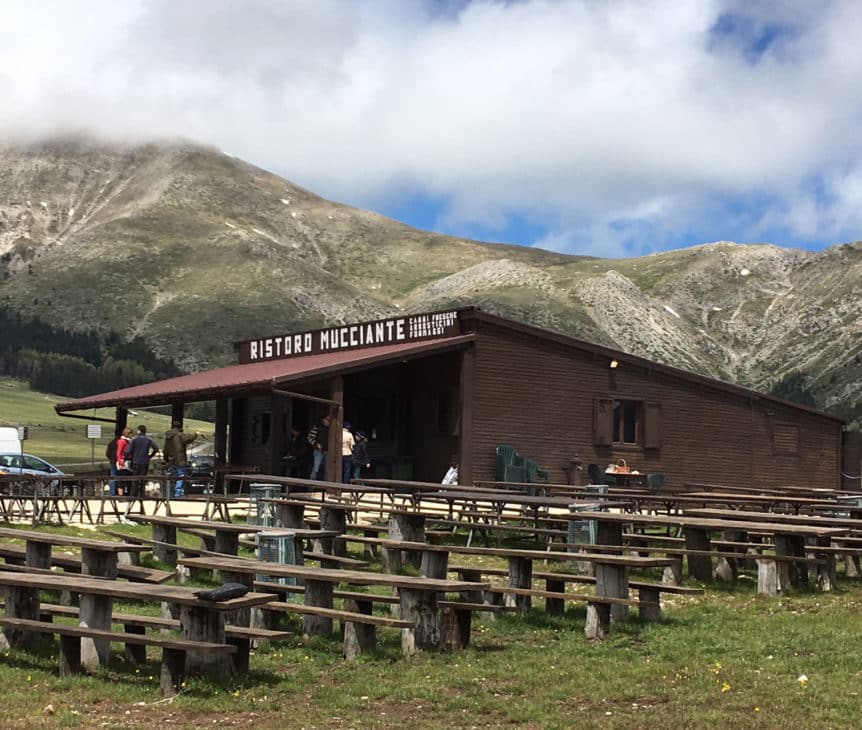 This article appeared in the September 2016 issue of Dream of Italy. Updated 2018.

If you’re a fan of spaghetti westerns, you might recognize the location of Ristoro Mucciante, a barbecue-deli-picnic spot on Campo Imperatore in the region of Abruzzo. This is the area Italians call “Little Tibet,” because of its similar mountainous geography, but also because of the geography of spirit that the area invokes.

In 1970, Campo Imperatore was the site for a series of westerns, including one called They Call Me Trinity, whose star, Bud Spencer, just died this past June. For those who are too young to remember, “spaghetti westerns” were a genre popular in the 1960s thanks to director Sergio Leone’s film-making style. The term was coined by American film critics because most of these westerns were produced on limited budgets and directed by Italians.  Think A Fistful of Dollars, For a Few Dollars More and The Good, the Bad, and the Ugly.

Today, what’s left from this era is a log cabin rising out of nowhere, nearly 5,000 feet above sea level at the foot of the Gran Sasso mountain, and there are always scads of cars and motorcycles in the parking lot. And that parking lot? Filled with BBQ grills and coals ready for cooking the local favorite, arrosticini (lamb skewers) that you can buy inside. What’s going on here?

Click here or on the photo below to see a quick video from when we filmed at Ristoro Mucciante: 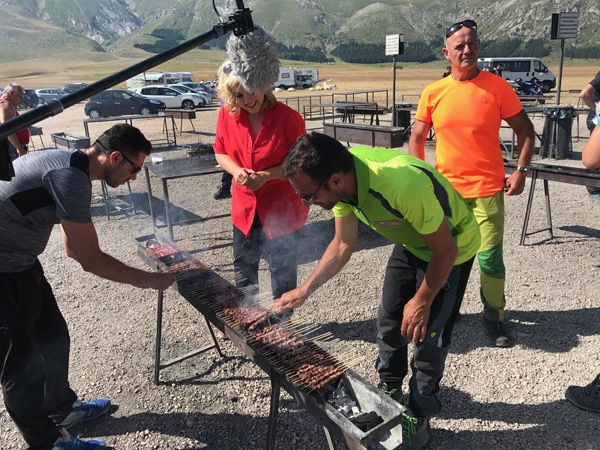 This is the home of the freshest Abruzzese farm-to-table street food imaginable — and the locals make regular pilgrimages out here, hauling their salads, side dishes, tablecloths and kids for a picnic experience like no other. For sale at Ristoro Mucciante besides arrosticini is a variety of sweet and hot pork sausages, gorgeous thick beef filets, three or four different kinds of local cheese (pecorino is my favorite), homemade bread and an assortment of chips, cookies, sodas, beer, wine and soft drinks. Just add the ambiance — and cook your own meat!

And because it’s well situated between Castel del Monte and the resort at the top of Campo Imperatore, a lot of tourist traffic passes by this curious place as well. Why? For film buffs, this area is famous, having provided backdrops for films like The American, The Name of the Rose, and Ladyhawke. As for Campo Imperatore, it’s historical claim to fame is that from August 28 to September 12, 1943, the local hotel served as the prison of Benito Mussolini until he was liberated by the German armed forces.

Today, the Campo’s Hotel Imperatore is the main accommodation of its namesake ski resort and is a good starting point for hiking on the western slope of the Gran Sasso. There’s even a notable observatory here which, since 2001, has been home to the international program that led to the discovery of some 61,000 asteroids.

Back to the Ristoro Mucciante is owned by brothers Rodolofo, Roberto and Gianni, who grew up in nearby Castel del Monte, the grandsons of a butcher. They still raise some 500 sheep in the area and their next project is working to earn a “biologic” (organic) designation and complete the vertical integration by raising all the plants their sheep need to eat.

Rodolfo and his brothers do not do this full-time; in fact, Rodolfo is an accountant by profession. But they are very happy to work with their parents, keeping this unique tradition alive. Their enthusiasm is contagious, and it’s clear they do this as much for love as for profit.

“This is the best work in the world,” says Rodolfo, with a grin. “When people ask me what they should see in Abruzzo I tell them Castel del Monte, Calascio and Santo Stefan di Sessanio. But first, see Ristoro Mucciante.”

Linda Dini Jenkins blogs at www.travelthewriteway.com and leads tours to Italy for people who hate tours.