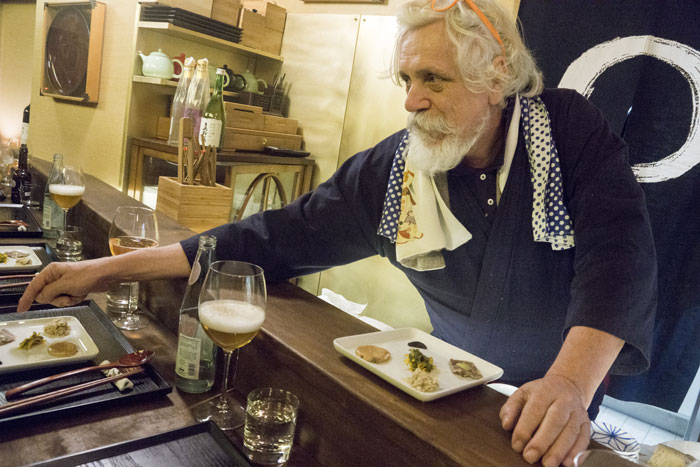 This article appears in the March 2017 issue of Dream of Italy. Updated 2018.

Florence has always been a food-centric town. Classic old-school trattorias, new vegan hipster restaurants, tripe-sandwich stands and never-ending cafes ﬁll the city. The menus are often the same almost everywhere, not because of tourism, but rather because Florentines, when they go out, always want the same traditional dishes, the ever-present two-pound T-bone steak, roast pork and tons of fried foods.

Hidden, off-the-beaten tourist track, is one of my all-time favorite restaurants, the rather non-traditional restaurant, Cibrèo, opened in 1979 by Fabio Picchi and a group of his friends. Located in front of the Sant’Ambrogio Market, which inspires the seasonal menu variations at the restaurant, the surrounding neighborhood is still really for locals.

The menu at Cibrèo hasn’t changed since it opened and I never tire of dining there. Most people don’t know that Florentines traditionally do not eat much pasta. You won’t ﬁnd pasta on the menu, nor bistecca alla ﬁorentina. This is home cooking taken up a notch. Almost all of the dishes are precooked as they take a long time to make, like your grandmother’s kitchen on a Sunday, if you are Italian. This is the restaurant where I take chefs – Italian and foreign alike – to experience the true ﬂavors of the Florentine kitchen.

Your server will start you off with a glass of Prosecco as you peruse the menu and order. Your table will ﬁll up with a huge assortment of small plates to be shared, while waiting for your ﬁrst course. One of my favorites is a cold tomato spread which tastes like the essence of summer. Try it on the incredible rolls, baked right there.

First course choices are usually intensely ﬂavored soups, such as a yellow bell pepper soup garnished with tiny croutons and a drizzle of extra virgin oil and a generous garnish of freshly grated parmesan cheese on the side. The summer menu might feature rich ricotta ﬂan or a meaty ragu in winter. The spicy fish soup is another favorite. Chili pepper is more common rather than pepper in the Florentine kitchen.

Main courses are simple ricotta-and-veal meatballs or a roasted pigeon served with candied mustard fruit. Although Florentines are not big ﬁsh eaters, Fabio has a passion for the Tuscan coast and he has a relationship with the ﬁshermen off the island of Elba. He prepares the freshly caught ﬁsh in such a simple way to show off the maximum freshness.  Save room for dessert. As an ex-pastry chef, I am picky about desserts and once I tasted their cheesecake and ﬂourless chocolate cake on the menu, I never wanted anything else.

Always curious, always reaching for something new, Fabio has grown Cibrèo into various new venues. The ﬁrst to open was the less expensive trattoria, nicknamed Cibrèino, and known as “the poor dining room” or la sala di poveri as it was basically the backside of the kitchen. The food was the same, just a smaller choice of the menu items, no wine list and a few communal tables.

Over time, the kitchen needed more room and the dining room was moved over to a new location on Via dei Macci. The staff has a secret passage way to bring the food from the kitchen and now there are more tables.

Across the street from the main restaurant, is the café. This is where most of the locals will go to dine. It functions as a breakfast spot with coffee and pastries or small sandwiches for breakfast and snacks, then lunch and dinner are also served here as well as cocktails. This is more like a French bistro with limited tables – and a few outdoor tables, perfect for people watching.

Not happy with just three venues, Fabio created a private club, Teatro del Sale, housed in a large, old storeroom where he has an open kitchen where diners can watch while they eat. You will need a membership (7€ if you are not a resident in Florence or 15€ for locals) to access the club.

The Teatro as you may imagine is also a theater. Fabio’s wife, actress Maria Cassi, performs here and also is the artistic director. The space opens for breakfast, lunch and dinner. Food is served buffet-style on a serving table, where you help yourself, taking small tastes of the various dishes of the day. Leave room for the specials!

While you are dining, you will hear the chefs yell from the kitchen when the specials of the day are ready. Go to the kitchen window and they will pass you a small tasting plate. This happens several times during the meal. At breakfast, they will be making hot foccaccia with mortadella as one of the specials. Lunch time usually includes spit-roasted meats. In the evening, the buffet is interrupted to create the theater space for the show after dinner. Quickly they break down the buffet table and rearrange the tables and chairs for you to enjoy the show.

Fabio has just opened a new dining space called Ciblèo. Back in the ‘80s Fabio was asked to open a restaurant in Japan. The deal was, when the woman in Japan could grow Tuscany’s kale, cavolo nero, Fabio would open the restaurant. He received the letter and went to Japan and had the restaurant until the Japanese woman died, about six years later.

His Florence restaurants have always had young apprentices from Asia. This tiny 20-seat restaurant lets Fabio have fun and with a young Japanese chef and a young Korean chef he has blended the various cultures. Using the best Tuscan ingredients such as the ancient grain ﬂour Verna, meats from Casentino and artisanal products from Japan, Fabio has created an inspired menu.

The soft opening tasting menu featured small plates – Chinese-style ravioli, black garlic, tuna, pork, ham, smoked artisanal soy sauce, mini steamed buns and dumplings, We enjoyed a chicken curry from China on a rare rice as the ﬁnal main course. Our palate cleanser at the end of the meal was a small shot of sambuca with a slice of frozen persimmon. Fusion at its best. For regular diners, there are now two menus to choose from, including a more expensive one featuring a special main course, which could be a Japanese Udon dish or Korean guinea fowl.

If you would like to meet Fabio, even before you visit Florence, check out his videos on YouTube @picchifabio Fabio is a volcano of ideas and has two more projects in the works as he has recently taken over a new space on the other side of the market in an old farmer’s cooperative. Stay tuned…

Judy Witts Francini has lived in Tuscany since 1984. She’s the author of Secrets From My Tuscan Kitchen and the Taste Chianti app. Judy runs custom culinary tours in Chianti and Sicily. For more information, visit www.divinacucina.com

Cibrèo
Restaurant:
Via del Verrocchio, 8r
Florence
(39) 055 2341100
www.cibreo.com
Open Tuesday to Sunday for lunch and dinner.
Must have reservations.
About 90€ per person.

Trattoria:
Via de’ Macci, 122r
Florence
Open Tuesday to Sunday for lunch and dinner.
No reservations.
About 35€ per person.