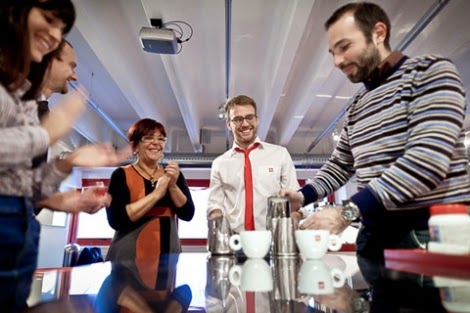 Our August and September issues are devoted to Italy’s Best Cooking Schools. Here’s another kind of gourmet school – coffee university!

Trieste is home to a handful of legendary caffès, notably Cremcaffè (Piazza Goldoni 10), Caffè San Marco (via Gesare Battisti 18) and Caffè Tommaseo (Piazza Tommaseo). So it seems natural that the city is also home to both L’Università del Caffè and Raccolta Illycaffè, the first a coffee course and the second a little museum, both at the headquarters of illycaffè (via Flavia, 110), founded in 1933.

Fred Plotkin, author of Italy for the Gourmet Traveler, writes that the coffee course is not a promotional tour for Illy: “What I learned about the history, cultivation, harvesting, blending, roasting, grinding, brewing and tasting of coffee would apply to any cup you might have in front of you.”

The university was established in 1999, originally in Naples and moving to Trieste in 2002 (there are also 24 branches around the world). Its aim is to promote, support, and communicate the culture of quality coffee worldwide, and since 2000 more than 127,000 students have attended the classes.

While the majority of those students enrolled for professional reasons, more than 5,000 of them took the ‘Discovery Courses,’ which are for coffee lovers and connoisseurs – Illy welcomes anyone who is a coffee enthusiast! These classes include ‘Coffee,’ ‘Tea,’ ‘Chocolate,’ ‘Cappucino,’ ‘Aromas From Out of This World,’ ‘Barista for an Hour,’ ‘Coffee Connoisseurs’ (in Italian only) and ‘Coffee, Tea, and Chocolate Flavored Dinners’ (also only in Italian).

Most are two hours long and also include a guided tour of the illycaffè plant. Visitors who may not be interested in a class but want to tour the facility can arrange a tour anytime Monday through Friday from 9:30 a.m. to 5 p.m. Reservations may be made online at www.unicaffe.comhttp://www.unicaffe.com or by calling toll-free within Italy at (800) 821.021. — Barrie Kerper