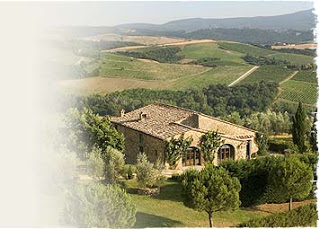 I’d seen that Olive Garden commercial one too many times… You know, the one where the narrator extols the virtues of “the Culinary Institute of Tuscany” where Olive Garden chefs supposedly go to train and get inspired to bring Tuscan-themed dishes back to the U.S. Forgive me, but I highly doubted such a place existed. I’d never heard of “the Culinary Institute of Tuscany” and in the commercials the school looked totally fake with an “Olive Garden” sign outside and everything. I wanted to know the the real deal and my background as an investigative reporter had me ready to do some digging.

I’ll admit that I was disppointed it didn’t take a full-blown investigation to figure out the truth, just some Web sleuthing. Apparently, Olive Garden really has a place in Tuscany where culinary managers go to train but the whole “Culinary Institute of Tuscany” is a just a name created by the restaurant company. The “Institute” is really the restaurant at Riserva di Fizzano, a medieval borgo or hamlet in the heart of Chianti. (The borgo was renovated in the 1980s by the owners of the nearby Rocca delle Macie winery.)

Over the past decade, Olive Garden has sent hundreds of culinary managers to Riserva di Fizzano during the winter months to train with Chef Romana Neri and Chef Paolo Lafata. The rest of the year, the restaurant is open to the public and serves traditional Tuscan cuisine nightly. Riserva also welcomes travelers to stay in its renovated two- and three-bedroom apartments. The Olive Garden Web site actually has a cool graphic with videos that shows the entire Tuscan estate.