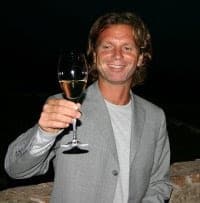 When I worked in hard news, sometimes we’d have what we’d call a “slow news day” or even “slow news week.” I felt like that was the case with Italy travel news this week until I kept hearing left and right about the release of Tuscany tour guide and author Dario Castagno’s latest book Too Much Tuscan Wine. Aha! Something for the blog I thought, and remembered I had been holding on to an article about this character from Chianti. I’ve never had the pleasure of meeting Dario though I’m a fan of his work. Writer Laura Cimperman has met the author and recounts the experience for us.

I wasn’t quite sure what to expect upon meeting the famous (or should I say infamous?) Dario Castagno. I had some idea of his personality based on what I had read in Too Much Tuscan Sun, however, it was Robert Rodi’s comment in the epilogue that stuck out in my mind. “Dario’s reserve, as it happens, is of the most attractive kind to vulgar Americans luck us: It’s Old World. He’s a gentleman in the original sense of the word.” Could this be the same man that told me I’d recognize his car because it’ll be the filthiest one in the parking lot? I guess I’d have to find out for myself…

He called me five minutes before we were supposed to meet, just to make sure our meeting was still on. I asked him if he had already arrived and he said, in a perfect British accent, “yes, but don’t rush…I always arrive early.” Isn’t it national law that in order to be Italian, you have to arrive half an hour late to every appointment? Was this man really Italian? I was beginning to have my doubts.