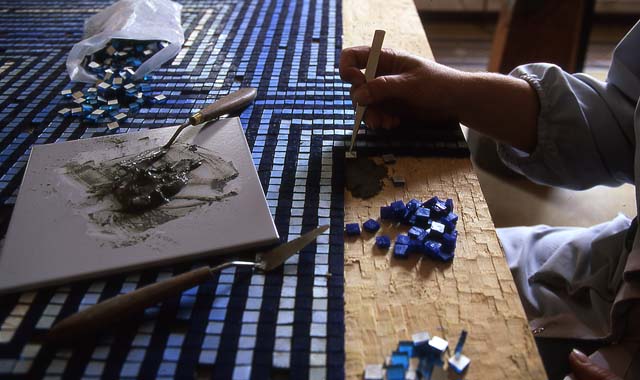 This is an excerpt from the April 2009 issue of Dream of Italy and was updated in 2018.

The Orsoni Mosaic Studio is a hidden gem in Venice. It’s tucked behind high walls in the Canareggio sestiere, off a fondamenta that wasn’t even on my Streetwise Venice map. Since 1888, the family-run foundry has been producing smalti (colored opaque glass) and gold-leaf mosaics that are used to restore the world’s most beautiful churches, such as Basilica San Marco, and shipped off to provide materials for renowned buildings such as Gaudi‘s Sagrada Familia Church in Spain and the Golden Room in Stockholm, where Nobel Prizes are awarded.

In 2003, Maestro Lucio Orsoni, the great-grandson of the company’s founder, and a world-famous mosaic artist, decided to open the curtains of this secret place. He initiated workshops to teach what he calls “a divine art.” Classes here are kept small (six people maximum), so there’s lots of individual attention given by instructor/artist Antonella Gallenda, who’s been working by Lucio’s side for 30 years.

Students come from all over the world for one- or two-week sessions to learn basics, micro-mosaics or portraiture. There are also three-day classes for those who simply want to have a taste of the craft and make a small mosaic—adding a cultural zing to their stay in Venice.

When I visited last fall, I got to see the fascinating work of the foundry, where men gather around a blazing furnace, scooping molten glass onto a rotating metal belt where the goo flattened and transformed into iridescent pancakes. There’s a huge color library—rickety wooden shelves stacked with 2,000 hues of smalti, which are cut into pieces to make mosaic tiles. Everybody from the workers in the foundry to the staff and students who I met were especially upbeat, I’m guessing because they’re surrounded by all this beautiful sparkly stuff all day.

Stopping by a two-week portraiture class, I found students hammering and gluing away, with a fun, creative spirit in the air. Though all the work looked like it came from pros, the gal from Chicago whose portrait of her adorable five-year old son I admired told me she’d never done mosaics before.

And there was Connie Giacobbe, a former Kansas City hairdresser who told me she’d come here as a beginner three years ago and now was back for her third time. Her technique has advanced so much she’s gotten commercial commissions for her creations.

A fab feature of the program is that in the same renovated Orsoni villa as the workshop is Domus Orsoni, a bed and breakfast designed by mosaic artisans where students can stay during their course. It’s the only arti-turismo I’ve ever seen, and when it’s not filled with workshop participants it’s available to visitors looking for bargain digs in an under-touristed Venice neighborhood.

Connie told me she loves staying there and waking up to the sounds of the foundry workers singing as they begin their day. Through her stays here taking classes, she’s made friends with mosaic artists from all over the world. She told me, “A lot of nights after dinner, we’ll go back into the workshop with a bottle of wine and some cheese and get to work. Sometimes we’re up until three in the morning. It’s completely relaxing.” — Susan Van Allen

Foundry tours can be arranged by appointment. Week-long mosaic master classes are offered at least once per month throughout the year, except August. Thematic workshops (micro-mosaics or portraiture) are offered twice a year, so it’s best to reserve well in advance. Three-day workshops are offered six times a year. A master class costs 780 euros for one week, 1,400 euros for two weeks. The thematic class cost 1,800 euros for two weeks. The three-day workshop is 500 euros. Prices include use of all equipment and materials (including 2,000 Orsoni smalti), art instruction and one or two guided tours.

Rates: Single rooms start at 80 euros  per night. Doubles range from 100 to 250 euros and triples range from 120 to 280 euros per night, depending on the season. Includes breakfast.