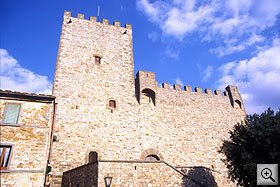 For the first time in its history — a history that stretches back to the time of the Etruscans, if you must know – the Tuscany town of Castellina in Chianti is opening the doors of its Rocca Comunale di Castellina to the public. This medieval fortress was built in the 14th century, when the Castellina became part of the “League of Chianti,” which functioned primarily as a military association serving Florence. No longer needed as a military fortress against feuding Italian legions, the Rocca remained little more than a testament – albeit an intimidating-looking one – to centuries past until last year, when renovations began to make the fortress suitable for public viewing. A year of work has restored the ancient stronghold, even adding a retractable roof that allows visitors to access the tower, and has brought this ancient monument into the 21st century for your wonder and enjoyment. — Justine Gregory