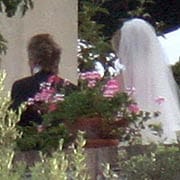 Rocker Rod Stewart married his longtime girlfriend Penny Lancaster Saturday in a low-key ceremony on the Ligurian coast. According to London Net, “The couple, who have a one-year-old son, Alastair, tied the knot in Santa Margherita Ligure at the impressive Villa Durazzo, watched only by Penny’s parents, Sally and Graham.After the ceremony, Rod and Penny were pictured smiling and waving on their luxury yacht in preparation for their reception at mountainside abbey La Carvara.”

They’re not the only star couple who got married in Italy this month. CSI star Claire Forlani and Dougray Scott of Desperate Housewives (he played Ian) were married at the Forlani family home in Pievebovigliana in the Marche region. According to E! News Online, 120 guests witnessed the June 8 nuptials and Forlani’s father cooked for the crowd.

And PerezHilton.com reports that Michael Bolton and Nicolette Sheridan may be marrying in Italy this week.

Of course Katie Holmes and Tom Cruise’s Italian wedding seemed to get the most buzz. They were married on Lake Bracciano in November. Read this AOL travel feature, by yours truly, about other celeb couples who married Italian style!