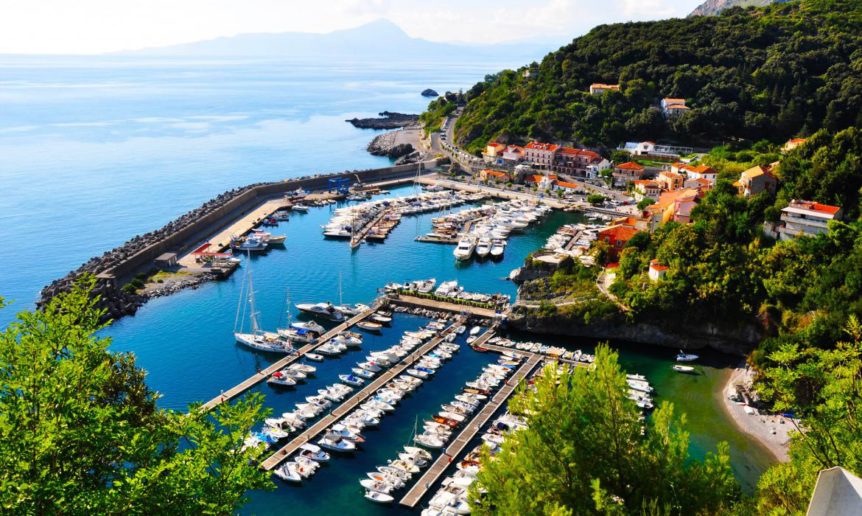 This article originally appeared in the May 2004 issue of Dream of Italy. Updated 2018.

If the throngs of tourists fighting for space on the roads and beaches of the Amalfi Coast only knew what was within their reach just a bit further south: a coastal haven at least as picturesque, if not more so, far less crowded and certainly not as expensive. Luckily, for the rest of us Maratea remains a well-kept secret among Italian visitors and a handful of British tourists. Two and a half hours south of Naples, Maratea’s Basilicata region its only outlet on the sea.

This community of 11 small villages seems to combine the best of Italy’s better-known playgrounds. The winding roads boasting breathtaking views make visitors feel like they’ve found Amalfi’s twin
sister. The Mediterranean flora and fauna evoke comparisons with Portofino. The snow-capped Apennine Mountains hovering above give the area a bit of an Alpine feel.

Maratea offers a bonanza for nature-lovers. Saddled in a valley between Italy’s two largest national parks — Pollino and Cilento — Maratea provides many nearby opportunities for hiking. For water lovers, boating, sea kayaking and scuba diving await. Even the most casual gardener will be impressed with the area’s plentiful bougainvillea and geraniums as well as the pine, olive, lemon and oak trees that dot the coast.

The heart of Maratea is the area’s old town, known as Maratea Superiore, built into the mountainside (over 2,000 feet above sea level) in order to afford protection from medieval invaders. This pristine village boasts a staggering 44 churches (all of Maratea has only 5,000 inhabitants). Its maze of steep, cobblestone streets reveal well-kept piazzas and charming shops and restaurants.

Atop one of the steeper lanes sits La Locanda delle Donne Monache, a former convent turned 4-star hotel. The building was completed in 1735 to house Visitandine nuns. The hotel’s modern décor has a whimsical feel reflecting the colors of the sea (aquamarine and turquoise) and the historic buildings of the town (terracotta and gold). Crisp white linens complement the bright colors as the clouds and snow-capped mountains loom outside.

Yet, there’s nothing whimsical about the service at this hotel. So many 4- and 5-star hotels in resort towns are staffed with less-than-friendly help. Not here. The front desk clerk was sweet and enthusiastic, the bell boy was proud to practice his English and the restaurant’s maitre d’ Giovanni knew what you needed before even you did.With 24 suites and five rooms staggered throughout multiple levels, Donne Monache offers an intimate experience. Even the terrace and pool have a private feeling, like you can look out over the town’s red-tiled roofs without being seen.

With the town’s majestic placement above the sea, it’s a shame that the hotel, while it has lovely views of the centro storico (historic center of the town), lacks ocean views. Luckily, Donne Monache offers a shuttle to its sister hotel a few minutes away, which has a seaside panorama that makes even
the most well-traveled of visitors open their mouths in awe.

The 5-star Santavenere Hotel was the dream of Count Stefano Rivetti, who arrived in Maratea in the early 1950s and decided to make it his “golden refuge.” He built the hotel on a picturesque promontory in 1956 and shortly thereafter it became a hideaway for international jet-setters such as Frank Sinatra and Richard Burton.

The hotel’s architecture has a distinctly 1950s simplicity, but that’s part of its charm. The feel of the entire property is something like country club meets Caribbean. The picture windows in the spacious lobby are the first hint at what lies beyond the building. The scenery is so breathtaking, so colorful, that the windows and their views can easily be mistaken for watercolors. The view of the rocky coastline and
bubbling aquamarine sea is that stunning and unreal.

In this main building, all of the classically decorated rooms have a balcony with a view of either the sea or the garden (with a distant sea view). If you get the sea view, you might find it hard to ever leave your room. Outside, on a seaside cliff there’s a saltwater swimming pool, surrounded by an impeccable lawn. A spa and tennis courts offer additional diversions. Across the lawn from the main building a smaller structure has been built comprised exclusively of junior suites. The suites are colorfully decorated with modern furniture and all have balconies overlooking the lawn.

Guests wishing to use the beach and beachside facilities are taken by golf cart on a lovely ride
through the hotel’s lush parkland. Down by the sea, the water sprays up on lounge chairs set up on landings carved out of boulders. Guests can explore the gray-pebbled beach and the coves that lie on either side of the beach restaurant. Some people get here before lunch, have lunch, then dinner and leave only when they absolutely must.

Both the Donne Monache and the Santavenere are owned by Mondo Maratea, a company focused on “integrated tourism,” providing visitors with more than just a place to stay. In addition to hotels, the company owns a handful of shops, restaurants and bars in Maratea. Mondo Maratea also
offers excursions throughout the area, from nature walks to boat trips to Sicily’s Stromboli and
the Amalfi Coast to a drive to the Greek ruins at Paestum. There’s also a gastronomic academy where guests can take cooking lessons.

Mondo Maratea’s mission in helping visitors discover the offerings outside the hotel gates is an
innovative and smart approach, especially in an area as rich in history and culture as Maratea. The only danger is that Mondo Maratea’s mission may succeed all too well, bringing too many tourists who will spoil the tranquility of this special place.

With a new airport nearby, more tourists won’t be far behind. Since Maratea may not remain a secret for
much longer, now is the time to go. Sit under the fragrant flowers, dangle your feet into the spraying sea and debate whether it is fair for just one place to be blessed with all of this exquisiteness.

Mondomaratea.it features the most complete information on Maratea in general as well as
the hotels below:

La Locanda delle Donne Monache
Via Carlo Mazzei, 4
(39) 0973 877487
Open: May to October
Room picks: #9 has a bathtub carved into the rocks. The La Badessa suite has two rooms, one with a canopy bed, and a spacious private terrace.
Rates: A standard double starts at 123 euros per night. Rates include breakfast and shuttle to port/beach.

Santavenere Hotel
Maratea Porto
(39) 0973 876910
Open: April to October
Room picks: #25 is a well-positioned suite with a perfect sea view.The large balcony is
covered with flowers. A good suite with a garden view is #20. Choose a ground floor junior suite and you’ll enjoy a spacious patio.
Rates: A double room starts at 187 euros per night. Prices depend on season and view and include breakfast and shuttle to the old town.

In 1963, Count Rivetti, who first put Maratea’s name on the tourism map, commissioned a gigantic sculpture of Jesus Christ as a gift to his adopted town. Florentine sculptor Bruno Innocenti crafted the 72-foot statue called Il Redentore (the redeemer) out of white marble. It towers over Maratea from Mount St. Blaise near the basilica of the town’s patron saint. (If you’re wondering, the statue of Christ in Rio de Janiero is 98 feet tall.) Some say that from a distance the statue looks like a perfume bottle
with wings.