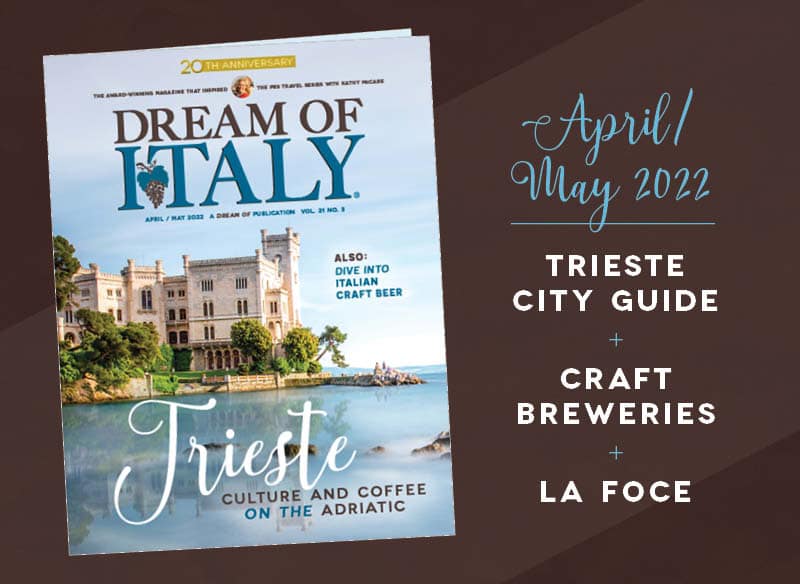 Trieste: A Different Side of Italy
This city of coffee and culture on the Adriatic deserves one of our longest cover stories ever! Trieste is the Italian city least like the others. Once upon a time, this was the window on the world for the mighty but nearly landlocked Austro-Hungarian Empire. It became a multicultural bubbling bean soup of a city—not just Italian beans but Austrians, Slovenes, Croats, Greeks, Jews, Turks and a bit of everything else, including one very famous Irishman. Trieste is your perfect next destination, peel back the layers on a most fascinating city.
Plus: Where to Stay and Where to Eat in Trieste

Dive Into Italian Craft Beer at These Five Breweries
Italy is home to one of the most robust craft beer scenes. Since 1996, more than 900 independent craft breweries have opened across the bel paese, Beer aficionado Kevin Raub details five breweries to experience Italian craft beer from the highest microbrewery in Europe to a do-not-miss taproom in Pienza (Tuscany) to cutting-edge beer innovation in Bologna. Don’t just drink wine on your next trip to Italy!

Dream Day in Italy: Tuscany’s La Foce
You haven’t seen an garden until you’ve seen La Foce, a classic Tuscan estate in the Val d’Orcia featuring cypress trees, goldenrod buildings and an artfully designed and landscaped Italian garden. If you want to stay more than a day, there are also dreamy overnight options.

An Ode to Rome’s Iconic Pine Trees
Rome’s famous stone pine trees, also known as umbrella pine trees or Pinus pinea in botanic terms, were revered symbols of spring and immortality. Find out more about why they are not only stunning symbols of the Eternal City but hold mythical status.

Members only have immediate access to this new issue and nearly 190 back issues on every corner of Italy. Join now—and also receive exclusive Italy travel discounts!