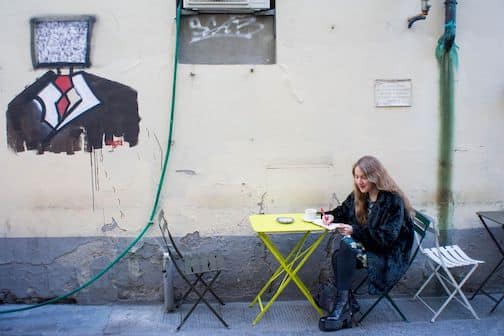 This interview originally appeared in the book Dream of Italy: Travel, Transform and Thrive. Not only did we profile Mary Gray, she also was a key contributor to the book, writing more than 80 pages on moving to and living in Italy. We consider her quite the expert on expat Italian life!

Mary Gray was born and raised in Mississippi and originally came to Florence as a study-abroad student during college. After graduation, she decided to attempt to move to Italy full-time, though her initial plan was to stay only one year. Following a series of misadventures in Rome, she landed back in Florence in 2013, where she has been living and working ever since. A writer, journalist and writing instructor, Mary shares the perspective of a young, single, professional woman in Italy. She’s the author of the book Rental Diaries: Thoughts From My Four Walls in Florence.

Kathy McCabe: Everyone has a story of how they came to dream of Italy. What’s yours?

Mary Gray: I don’t have a drop of Italian blood or influence. The closest approximation to anything Italian in the corner of Mississippi where I was raised were red-sauce restaurants like Tellini’s, where I went with my ninth-grade cross-country teammates for “carb loading.” Classy!

I did grow up, though, with an eagerness to travel, and an eye toward living on this side of the pond. But I mostly fantasized about places like Paris and London. The Italian interest emerged when I took an art history course in high school. My teacher was a Renaissance fiend, and her passion was contagious. I had an inkling I wanted to study abroad in Florence before I had any idea of where I would go to college.

When I eventually came for a semester, I found language learning to be an addictive adventure, which surprised me! Being thrown into Florence and living with a host mom whose English was nonexistent made me see the real-life rewards of language learning. I felt powerful.

After that semester, I went back to the U.S. to finish my degree, applying for fellowships in Italy in the lead-up to graduation. When none of my “aim-high” approaches worked out, I enrolled in an Italian language school in Rome and found an au pairing opportunity. The au pair setup fell through quickly once I was on the ground. But since I was 22 and had nothing concrete to go back to, my parents agreed to pay my first month’s rent if I could cobble things together on my own after that. I threw all my energy into surviving on the 20 hours a week I could legally work—teaching English, studying Italian, babysitting, taking on odd jobs, building up a modest writing portfolio. My friends and I took turns paying for each other’s coffees, based on whoever was flushest any given week.

After a year of that, I went back to the U.S. (ironically) for the initial phase of a master’s in Italian studies. A vacation after walking the Roman tightrope. My studies then brought me back to Florence, where I slowly started doing part-time work with a local magazine, The Florentine. Eventually I was hired full-time as an associate editor. I stayed on for about five years before going freelance in 2019. That job set the blueprint for my career as it is currently. 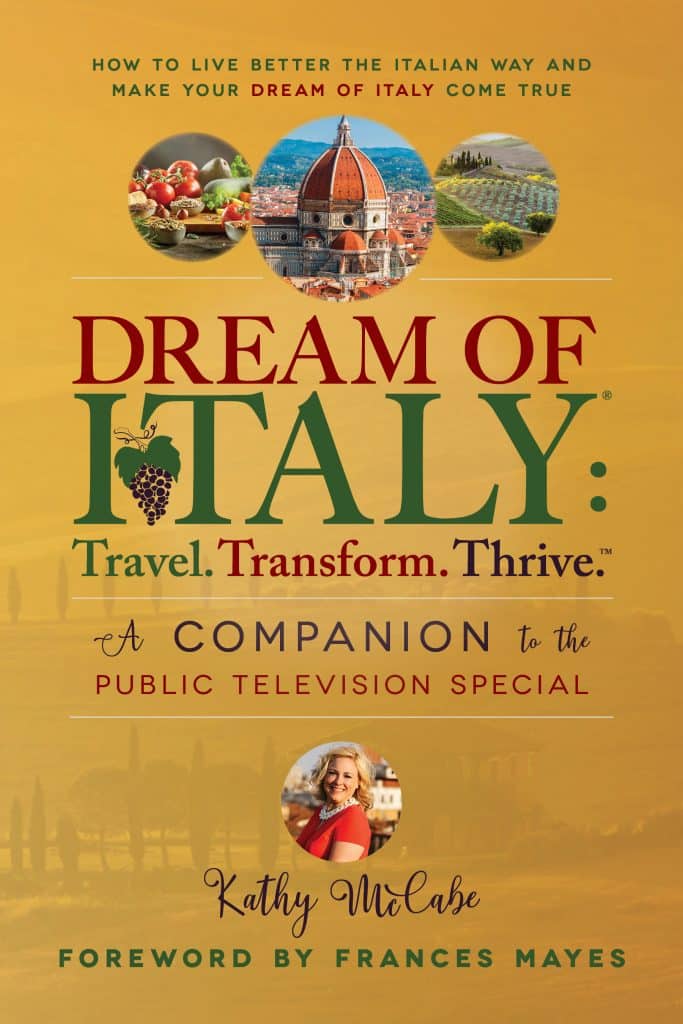 KM: What makes Florence a good place to be an expat?

MG: Beyond the obvious cultural and culinary perks, it is easy to be spontaneous here. Admittedly, Florence can feel small, especially after so many years in the city now. But even when I was 22 and fancy-free in Rome, I remember having to do a ton of coordination to see friends or arrange meetings. That’s not necessary here. The tradeoff is that you’re never anonymous and you’re always bound to run into someone at an inopportune moment. It’s not unlike Mississippi in that way, ha!

In my experience, this city tends to draw really soulful, smart people who are hungry for life. For all the waxing poetic about living simply in Italy, I think Florence is full of people who aren’t easily satisfied and who will own up to that. I don’t mean that in a material sense; I mean people who want a lot of stimulation, connection and “richness” if not wealth. Many want to live in multiple places or travel a lot or create something of value. They recognize that the spaces and the streets where we spend our days add up to something. I value that in the people that surround me.

KM: No matter where you live, everyone in their 20s is making their way and making choices. What do you feel the trade-offs have been professionally and personally?

MG: I’m flattered to get this question since I’m a few months shy of 32! (May I take a “mercy year” off for the time we collectively lost to Covid-19?) Unlike many people who have made the leap, I didn’t have to sell things or sever ties; instead, I was just working out the basics of building a life. Truthfully, I think my naïveté—along with my lack of a plan B—worked to my advantage!

Careerwise, I really developed as a writer and journalist here. Being fluent in Italian, while also being a good writer in English, does make you privy to stories and opportunities that parachute journalists can’t necessarily get. I was able to carve out some niches and get my work read faster than I might have if I’d been a needle (a recent grad) in a haystack (say, New York media). The downside is that nine years on, I’m just beginning to move beyond living month-to-month. Money will never be my main motivator, and in Italy it can’t be, but I’ve eaten enough canned beans in dimly lit apartments to know that pursuing it and putting it away has its advantages.

I harbor some familial guilt about living here, even though my parents have always encouraged it. I am increasingly cognizant that I’m more of an “Auntie Mame” character than a consistent presence in my nephews’ lives. Being far away does make you intentional about staying in touch and making the most of your time together, though. I particularly love having family visit me.

I’ve gained an extraordinary community, both with people who’ve made Florence or Italy their long-term home and people who’ve passed through. Living in such a popular destination has also meant reconnecting with people whose paths probably wouldn’t have crossed with mine again if I’d moved to Anywhere, USA. Doing my master’s also introduced me to loads of Italy lovers stateside, since my program involved a couple of summers spent on U.S. campuses. These transgenerational, transnational friendships have benefitted both my personal well-being and my career. Living cross-culturally and forever toeing the line of insider-outsider has also taught me so much about the value of, to quote Brené Brown, seeking “belonging” over “fitting in.”

KM: What is it like to be a young, single, American woman in Italy?

MG: Both marvelous and maddening. For much of my life I felt fairly invisible to the opposite sex, and in Italy that changed. That shift was empowering in some ways, less so in others.

I’ll spare you a dissertation on gender dynamics, but I think people can underestimate the challenges of navigating them in another culture. Particularly if you’re a strong-willed woman dating men in Italy, or just dealing with them in everyday matters. I don’t want to act like there’s no fun to be had—there is. And I’ll fully own up to the times I’ve embraced loony lipstick feminist Helen Gurley Brown’s 1962 tip to “be brazen when helpless!” Sometimes a foreign gal does need a hand. But generally, I’m not helpless, yet I’m often assumed to be. Many Italian men can be more paternalistic than an educated American woman might like, and not just romantically. While at The Florentine, I would often go out with my male colleague to meet clients, and it was common for male clients to ignore me and defer to him on everything.

In Florence, you do meet a lot of women who moved primarily for a partner or spouse, or who met someone early on. Some, not all, have had smoother paths because of it. Beyond the normal “sting” that even the most confident single woman can feel when surrounded by couples, on off days, you can catch yourself resenting those who have that built-in cultural (and usually financial) help. Integration and bureaucratic odysseys are often easier when you’ve got the intel and unwavering support of someone who grew up here.

KM: You’re a great observer of Italian life but especially of Italians themselves. What do you love about Italians?

MG: Florentines are famous for their gruffness, which can be charming or infuriating, depending on the day. Yet I think there’s real substance behind the warmth and friendliness of all Italians when it’s offered. I don’t have much patience for the chirpy, customer-service-y “kindness” that is so common in the United States. In Italy, there’s less of that forced friendliness, so when a gesture is made, or when someone offers exceptional service, it feels like it stems from a place of joy and generosity, rather than an agenda or a sense of obligation.

KM: What’s your best piece of advice for those who want to make the move?

MG: If you can’t shake the desire to try it, you should probably try it. But don’t look to Italy to define you. Don’t let your move become the most interesting thing about you and your life. Once you move here, you’re going to be surrounded by people who also live here, so it’s not like it’s a distinguishing characteristic. It’s cool, but it’s one component of your story. From time to time, I can get disheartened when loved ones stateside express pride in me for “making it work in Italy.”

Read about more people of all ages who made their “dream of Italy” come true in Kathy McCabe’s book Dream of Italy: Travel, Transform and Thrive