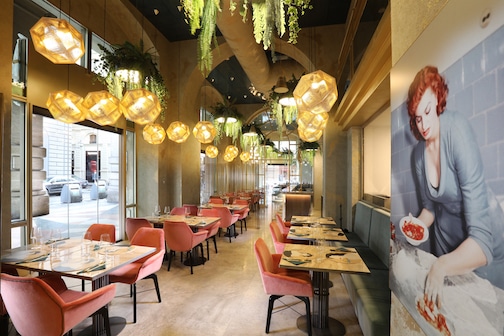 Florence is certainly known to be the culla del Rinascimento (cradle of the Renaissance), but what about its dining scene? The city boasts a great number of fine-dining restaurants and now the very first restaurant chain dedicated to the famous Neapolitan actress, called Sophia Loren—Original Italian Food. The restaurant’s namesake, arguably the greatest actress in the history of Italian cinema and a symbol of elegance and Italianità, was chosen for her veracity as the inspiring muse of the project, which includes an expansion plan to Naples and Milan.

Upon entering the three-story restaurant, guests are immediately attracted to the beauty and thoughtful design. In the front sits a large marble counter dedicated to the preparation of Neapolitan pizza. On the wall is a mosaic made by Luigi Masecchia with 1,600 metal caps which, like pixels, reconstruct the sinuous face of Sophia Loren. The green of the plants and flowers elegantly adorn the entire space, while seats alternate between sofas and circular armchairs with velvet fabrics in Mediterranean tones.

A nod to Loren’s hometown, the menu focuses on Neapolitan food. Its primary draw is pizza, with recipes created by Francesco Martucci, who was designated best pizzaiolo in Italy in 2020. Primi piatti include spaghetti al pomodoro and mezzo pacchero provola e pancetta (pasta with cheese and ham), both recipes designed by two-star Michelin chef Gennarino Esposito. As a sweet ending, the pasticceria of the chef Carmine di Donna can’t be missed. Particular attention was paid to the selection of coffee to achieve the most authentic representation of the espresso served in Naples. After a long selection process, which also included small roasting companies with decades of experience, Caffè Vesuvio Cuore Napoletano was chosen.

Loren says of the restaurant, “This new adventure is the natural evolution of my way of facing life with curiosity and enthusiasm. When I was proposed to participate in this project, I had no hesitations because this restaurant embodies some of the things I love most: Italian cuisine, the moments of conviviality linked to it and then several of my characters are somehow linked to food.” Via dei Brunelleschi, 11; 39-055-4934400; www.sophialorenrestaurant.com; open daily from noon to 11 p.m.