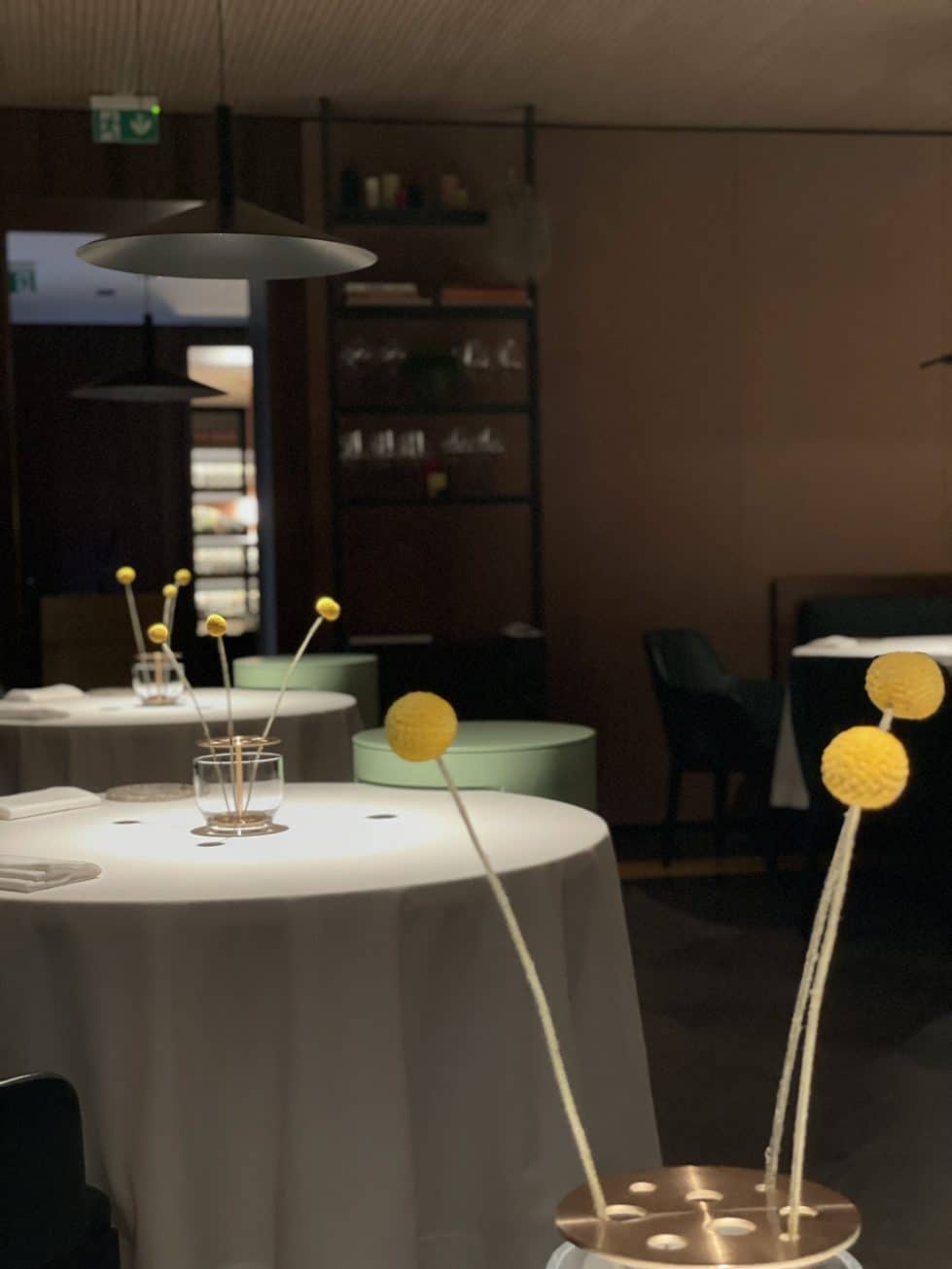 This article originally appeared in the August/September 2021 issue of Dream of Italy. Join Dream of Italy as a member to access this issue and 180+ back issues.

While it’s no secret that Naples is one of Italy’s best food destinations, most set their plans around discovering the best pizza, seafood and ragù. Aria, a new fine dining restaurant, offers a luxurious fever dream that could only exist in this city of contradictions.

Located on the corner of Via Loggia dei Pisani, it takes me a minute to notice the elegant gold placard in the glorious chaos of Napoli. Dancing quote marks are the first hint that everything to come beyond Aria’s doors will be both precise and surprising.

The first step inside the door lands me in the reception area that immediately dampens the buzz of the city. The host greets us, then our table captain arrives to give us a tour of the space. The dining rooms make me feel like I have box seats to a culinary opera. (Teatro San Carlo, Europe’s oldest opera house, is a short walk away.) I also imagine that I’m in the dining room of a patrician in Pompeii, if modern design could be transported back to the first century on the Vesuvian coast.

After we’re greeted and given a tour of the restaurant and the kitchen where not a toothpick is out of place, I’m seated in a sumptuous leather chair with a privileged view of the dining room. Given how obvious it is that every detail has been considered and resolved, I surrender myself to the kitchen and choose the complete tasting menu with wine and cocktail pairings. 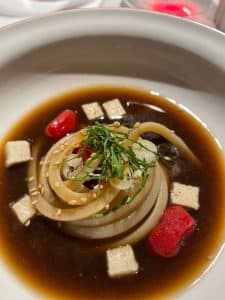 Created by chef Paolo Barrale, Aria’s philosophy is rooted in Campania’s traditions, but then expressed in the most modern ways. Barrale comes from Marennà, the Michelin-starred restaurant at Feudi di San Gregorio in nearby Irpinia. He brings with him Mario Stellato as sous chef. Barrale envisioned Aria as a stage for a completely new concept of cuisine, which, like Naples, is irreverent, sacred, profane, poor, rich, amusing and amazing. Aria tells this story, but with levity and humor. Spiritoso is the word I think to describe it—playful—in a very Neapolitan way.

An early course is a tiny bunch of escarole, spattered with crushed walnuts and positioned at the end of a long bowl designed for you to scoop the escarole through a small puddle of soy mayonnaise. The humble escarole, so delicately tied together at the bottom, speaks to the heart of Neapolitans (and anyone from the Neapolitan diaspora) while the soy mayonnaise nods at Japanese cuisine, the one foreign cuisine that proud and stubborn Neapolitans love and respect. 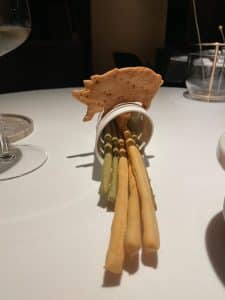 Soon after, a bread course includes crackers made with strutto (lard), and in the shape of a pig. With it comes a cushion of focaccia draped with veils of cured lardo, and butter made with milk from a breed of cow raised in organic pastures in Campania. Next, I’m served a crudo of hamachi, followed by a long-simmered veal, compacted, breaded and deep fried. None of these things seem to follow or match, except they do, brilliantly, because that’s what happens when creativity meets skill at the highest levels.

Barrale’s own admiration for Japanese cuisine appears in “ramen alla norma” pasta (also an ode to his native Sicily) with eggplant broth and small white cubes of ricotta made with almond milk. I start giggling when the table captain tells me what we’re about to have next, because I’ve never experienced anything comparable. The food, the wine and cocktail interludes, and the warm and uber-capable staff are making me fall even harder for Naples.

I fully bliss out and forget much of what happened after a dish of risotto and oysters. Instead of the starch holding the rice together, it’s the juice of the oysters, kissed with lemon. It tastes like a love letter from the sea.

The most spiritoso bite comes with dessert and an homage to the nearby Cimitero delle Fontanelle. A tiny skull, polished and then filled with a pineapple cream, tells the story of Neapolitan women who adopt the skulls that become unearthed in the cemetery in hopes that they’ll impart winning lottery numbers. It could only happen in Naples.

There are other fine-dining restaurants in Naples, but Aria is a singular dining experience that should be immediately added to any foodie bucket list. Yes, Naples is pizza fritta and laundry-draped alleys, but it is also the capital of southern Italy, a cultured city that isn’t ashamed of its rougher edges, but is nonetheless tired of an excessive focus on them. Aria will no doubt turn the heads of the most seasoned and sophisticated travelers.