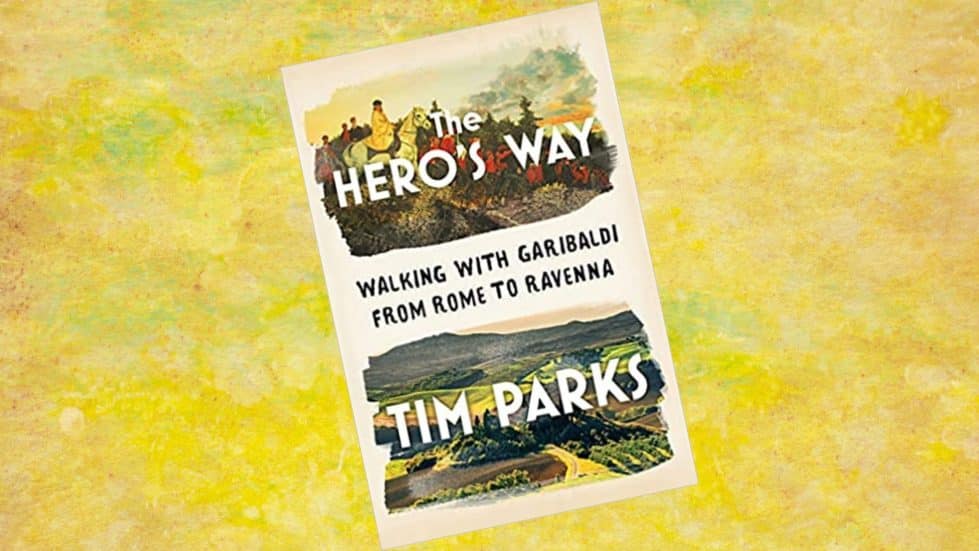 We will be joined by author Tim Parks on Facebook Live on Wednesday, September 15th to discuss his novel The Hero’s Way: Walking with Garibaldi from Rome to Ravenna. It is the story of Italy’s legendary revolutionary, Giuseppe Garibaldi’s march across the Appenines to Ravenna after being forced to to abandon his defense in Rome in 1849.

You can purchase a copy here but first enjoy this excerpt:

One version of my life story might be that I met an Italian woman in 1978, married, moved to Italy and have lived here ever since. Without really choosing the place or it choosing me. But a happy curiosity of my ‘Italian destiny’ was the way it was foreshadowed in adolescence. Faced with the need to choose a special subject for my history A level, I chose the Risorgimento, the process by which the various Italian statelets freed themselves from foreign domination and became, in 1861, a single unified nation. Under the guidance of a passionate teacher, we read a book of original documents from the time and learned of the four great artificers of modern Italy: the revolutionary republican Giuseppe Mazzini, who spent his entire life fomenting armed insurrections that invariably failed; the Machiavellian prime minister of Piedmont Camillo Cavour, who ably exploited rivalries between France and Austria to further Piedmontese expansionism, making his state the core of the emerging nation; the blundering but strangely effective Vittorio Emanuele II, King of Piedmont, who played a double game between his prime minister on the one side and the revolutionary patriots on the other; and finally Giuseppe Garibaldi, the extraordinary guerrilla warrior with a South American past who in 1860 astonished the world by taking a thousand rebels to the west coast of Sicily, capturing the island from a 20,000-strong Bourbon army, crossing to Calabria and driving north through Naples, gathering volunteers as he went, Rome bound, until he met the Piedmontese army racing south to stop him and handed all territorial gains to Vittorio Emanuele, creating the unified Italian state by fait accompli.

A year after those studies, in 1974, I took advantage of the newly introduced Interrail Pass to visit Italy for the first time and discovered in the process that I already knew a good percentage of the country’s street names. Viale Cavour, Via Mazzini, Corso Vittorio Emanuele, Piazza Garibaldi – the four patriots are everywhere, their exploits cele­brated in countless monuments, statues and plaques. By far the most attractive, both on the page and in stone, is Garibaldi: the deep-set eyes and bearded severity, the manly bearing beneath soldier’s cap and gaucho’s poncho, still transmit a powerful charisma; the words roma o morte! inscribed beside the many balconies around the country where he pronounced his famous rallying cry still thrill the heart. Shame that the history books have him down as an ingenuous fellow, a tool in the hands of others, a lucky simpleton.

I began to doubt this description a decade later when asked to review biographies of the hero. Manipulated he may often have been, but simpleton he was not. He was canny, highly organized, creative. And if there was luck, which he acknowledged, it was luck he worked for. The injustice is interesting. Passionately local, ever divided into clans, factions, lobbies and corporations, Italians are not a people inclined to unity. Suspicion, conspiracy theories, cynicism abound. Infighting is the norm, defeatism is rife. Garibaldi, most unusually, set these negative qualities aside, and with them his republican ideals, to focus on a single goal: unity at any cost. He believed it could be achieved in his lifetime and, exhorting others to forget their differences and fight, even die, together, he achieved it. He thus becomes a challenge, even an accusation, for all those who like to feel that courage is futile and progress impossible. To make matters worse, he lived to tell the tale. Despite collecting a dozen bullet wounds over forty years of fighting, the hero died in his bed in 1882 at the age of seventy-four.

All the same I did not fall in love with Garibaldi till I came across A Diary of Events in Rome in 1849 by Gustav Hoffstetter. Hoffstetter was a Bavarian officer who volunteered to fight for the short-lived Roman Republic which replaced papal rule in February 1849 and fell to French troops after a two-month siege in early July. Garibaldi was one of the commanders in that battle, a battle he knew he could not win. However, it was not so much the doomed siege that moved me as the description of the hero’s extraordinary retreat from Rome through central Italy together with his Brazilian wife, Anita, and 4000 volunteers. He had sworn never to surrender to foreign soldiers on Italian soil. Arguably, it was what the hero learned and the example he set on that calamitous 400-mile march that would make his future triumph possible. Hoffstetter was his aide-de-camp. Rarely, reading his account, have I wished so much to live in a different time and another man’s shoes. Or boots.

In 2019, 170 years after those events in Rome, I bought a pair of trekking shoes, persuaded my partner Eleonora to do the same and set off, in July, to retrace their steps.

Excerpted from The Hero’s Way: Walking with Garibaldi from Rome to Ravenna by Tim Parks. Copyright (c) 2021 by Tim Parks. Used with permission of the publisher, W. W. Norton & Company, Inc. All rights reserved.