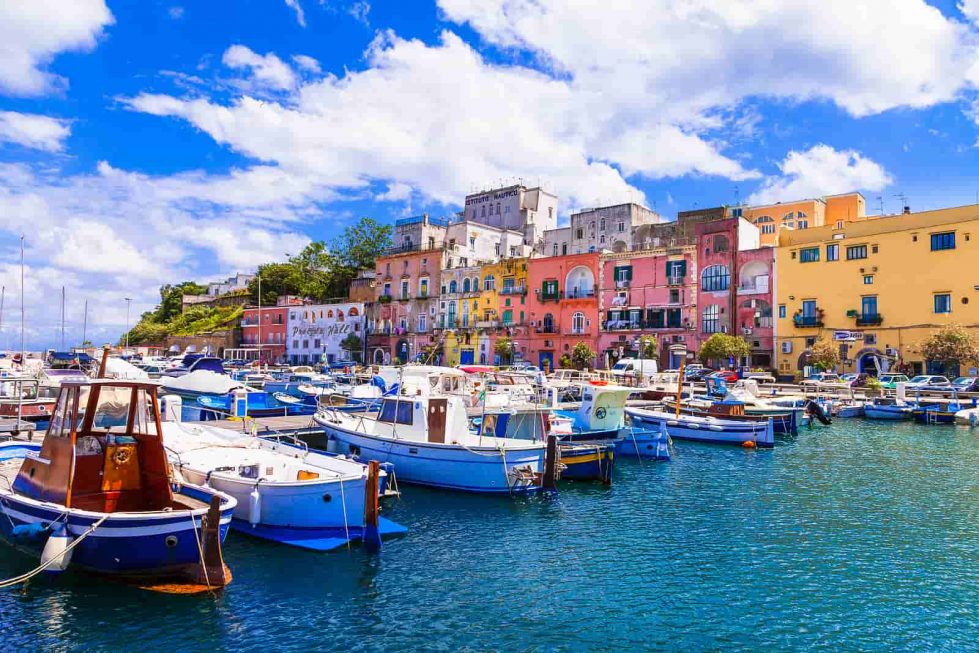 We might not be able to travel to Italy right now but that doesn’t mean that there aren’t new travel developments. We expect a Renaissance in Italian culture and travel to Italy post-Covid and here are some things to look forward to when we return. – Elaine Murphy

Procida Will Be Italy’s Next Capital of Culture

The tiny island of Procida, in the Gulf of Naples, was selected as the Italian Capital of Culture for 2022. Procida, population 10,000, earned this badge of honor with a proposal titled “Culture Doesn’t Isolate”—a reminder that while islands develop a culture all their own, they are still tied to the mainland. Candy-colored coastal houses, history dating back to the 16th century BC and ties to the film industry are sure to attract visitors to the 1.6-square-mile islet.

The Uffizi Marks the Anniversary of Dante’s death

Dante Alighieri, the famed Italian poet who wrote the Divine Comedy, died in 1321, making 2021 the 700th anniversary of his death. To celebrate and honor him, Italy will host festivities throughout the year. First up is a free virtual exhibition of drawings of the Divine Comedy hosted by the Uffizi Gallery in Florence. The 88 pencil-and-ink sketches, by 16th-century artist Federico Zuccari, depict scenes from the three parts of Dante’s epic poem—heaven, purgatory and hell (paradiso, purgatorio and inferno)—and have rarely been seen by the public.

Pompeii’s museum, the Antiquarium, has reopened after being shuttered since an earthquake rattled Naples in 1980. On display permanently are artifacts including pottery, statues, silver spoons, frescoes and graffiti. Perhaps most remarkable and touching is the room full of casts made of volcano victims and animals caught by surprise by Vesuvius’ eruption, as well as objects warped by the extreme heat.

Also notable in Pompeii is the upcoming restoration of the 19- by 10-foot mosaic of Alexander the Great’s victory over Persian King Darius III in 333 BC. The mosaic, dating to 100 BC, was found in Pompeii’s House of the Faun and was moved to the National Archaeological Museum of Naples (MANN), where it hangs on a wall today. Its restoration, using digital technology, is expected to be completed in July.

Half of the interior baptistery in Florence’s Duomo complex has been restored, with the remaining half expected to be completed by year’s end—a mammoth project considering the baptistery has more than 2,100 square feet of mosaics and 1,000 square feet of gold leaf. Four of the octagonal structure’s eight sides now shine with freshly cleaned marble, as well as repaired 14th-century tile and gold-leaf mosaics illustrating religious figures like prophets and cherubs.

A New Floor for Rome’s Colosseum

The original floor of the Colosseum is long gone, leaving exposed the maze-like basement cells used to hold gladiators and animals before ancient battles. Now, the Italian government plans to build a retractable floor so the arena can once again host events after the tourist crowds leave for the day. If you’re thinking this means the return of gladiator battles, think again—the floor will provide a stage for more modern, nonviolent events like concerts and plays. It will also retract when the weather is bad to protect the archaeological ruins underneath. Officials plan to hire an engineer for the project this year and complete the floor by 2023.

Civita di Bagnoregio, a hamlet of 10 people in central Italy, will be nominated for UNESCO World Heritage Site status. Dating back to medieval times, the hilltop town appears to be hewn out of the surrounding volcanic tufa rock. Though its population has declined due to earthquakes and rural flight, Civita di Bagnoregio has experienced something of a tourism renaissance lately. Its hallmark characteristic, a sloping footbridge that is also the only way in and out, draws hundreds of thousands of tourists each year.

Season 3 of My Brilliant Friend Filming in Florence

My Brilliant Friend, the HBO drama based on Italian author Elena Ferrante’s four-part Neapolitan Novels book series, is currently filming episodes of Season 3 in Florence. The film set features vintage cars and outfits from the 1960s and ’70s in historic central Florence locations including Piazza della Signoria, Piazza Santa Croce and Piazza Santissima Annunziata. This season will adapt the third book in Ferrante’s series, titled Those Who Leave and Those Who Stay.

See photos from the Florentine.