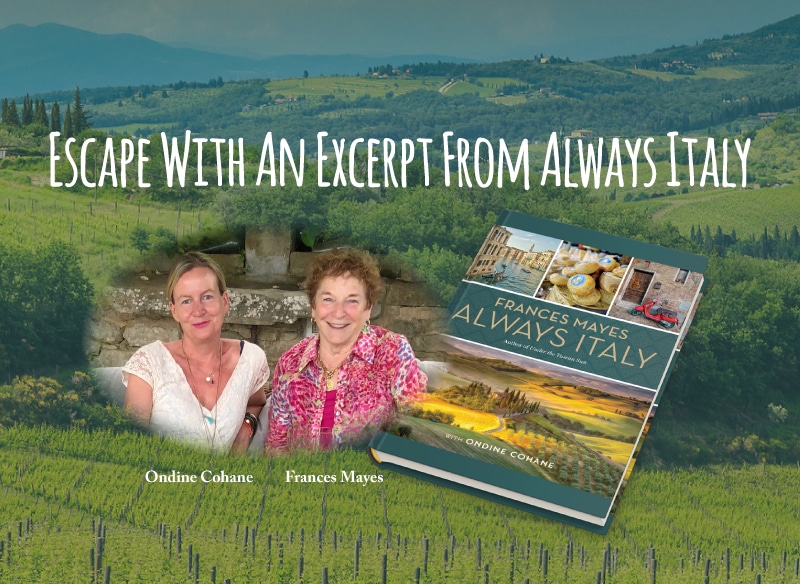 Editor’s Note: In a world that has gone mad, let’s close our eyes and dream of Italy. No one writes about Italy the way Frances Mayes does. In the midst of the chaos, she has a stunning new book out from National Geographic – Always Italy – along with her fab travel writer extraordinaire co-author Ondine Cohane. We’re offering a free copy of Always Italy ($35 value)  with every one-year membership/renewal of Dream of Italy. (These can only be sent to U.S. addresses). We’re sending them out now so you will receive your copy before the book is even officially published! The book and our membership are fantastic ways to armchair travel and starting planning your return trip to Italy when things calm down. The Italians are counting on us. Feed your dreams and remember why we love Italy so much with this excerpt from Always Italy. — Kathy McCabe

The journeys I took for this book were exhilarating because, finally, I could stop at Greek ruins in Calabria; order the rustic pastas of Sardinia; stand under waterfalls in Trentino–Alto Adige; watch water buffalo milk turn into mozzarella in Puglia; and hike the sublime trails of Valle d’Aosta. I scoured the sights in all 20 regions. At last, I thought. I am beginning to know this country. Still, much remains for as many future trips as I can plan.

What a grand quest! My sense of adventure multiplied. Lost-in-time borghi (villages) of the Abruzzo and Molise; peak dining experiences in Emilia-Romagna; the joyous Sicilian Baroque churches that seem to have whipped cream as a building material; Le Marche’s turquoise waters and beaches, which looked to my Southern eyes like white grits. Finding the far reaches of Lombardy’s lake country: bliss. Those eagle-nest mountain retreats around Bolzano and Merano for curative mineral waters and robust mountain food. I especially liked the little castle strongholds in Piedmont, with undulating vineyards neat as rows of knitting.

Getting to know the north was the big surprise. I thought that as I began to hear German and the terrain neared Austria and Switzerland, some Italianness would erode. Not so; the cultural mix near the borders was, instead, stimulating. I learned a new word: ecotone, the zone between two places with characteristics of each. The cross-fertilization of histories enlarged my love for Italy.

How glorious, too, discovering each region’s food traditions: vastly different, passionately maintained. I’m sure you can find a bad meal in Italy—but if you follow your good instincts, where might that be? Even freeway Autogrills serve tempting panini and often feature cafeterias with pasta, grilled meats, and fresh vegetables. At the gas station! How is this possible? The simple answer: Italians won’t put up with bad food. My idea of heaven is to walk into a town around noon on Sunday and locate, usually by aromas drifting from the doorway, where the locals will be having their pranzo (lunch) on this buona domenica.

I followed several food—especially cheese—and wine quests, wanting to try everything. It was fun tracking how the all-important daily bread varies. From the unsalted, hard-crusted loaves of Tuscany to Puglia’s cake-like rounds weighing in at six pounds (3 kg) or more to Liguria’s tender focaccias and Sardinia’s savory flatbreads, all taste of the place itself.

So ancient, Italy is actually quite young. Previously fragmented, it became a unified country in 1861. The heritage: settlers, invaders, and power grabbers, all spreading their languages and customs. Rugged mountains cut off egress, creating isolated villages within the craggy Apennine and Dolomite ranges. The mezzadria (sharecropping) system, a feudal tenant-farming arrangement, was essentially serfdom: nobody going anywhere. For dwellers in the Papal States, the church prohibited movement outside their boundaries without a passport. All this resulted in self-contained small worlds, highly individualistic. Broken into Papal States, House of Savoy rulers, the Kingdom of Two Sicilies, and the Bourbon reign, the governments up and down the peninsula held sway in their territories, but no central power prevailed.

The fiery nationalist Giuseppe Garibaldi, with his ragtag army, first conquered Sicily, then moved onto the mainland, sweeping his volunteer Redshirts north, some armed with farm implements. Unification! Today, almost every town in Italy has a Piazza Garibaldi.

But guess what? Unification never totally worked. The country refused to blend into a harmonious whole. The particular patchwork of dialects, cuisines, architecture, and art remained intact. Therefore, Italy endures as the most diverse country in the world.

A quick hit of context. Italy is roughly the size of Arizona. Imagine that southwestern state studded with Rome, Venice, Milan, Florence, Turin, Siena, Palermo, and a few dozen other fascinating cities. Imagine 5,600 museums and archaeological sites. And that’s not all. Italy possesses more UNESCO World Heritage sites than any other country in the world.

Amid so much beauty and humanism, you feel confirmed. The glittering, otherworldly Orvieto cathedral. Majestic Marcus Aurelius on horseback in Roma’s Piazza del Campidoglio. The frescoed palazzi of Trento look like medieval board games. Not a thing apart, art exists as naturally as air.

On your way to buy bread in Venice, pass Palladio’s white church, Il Rendentore. Breathe in. Your sense of the possible expands. In Puglia, when I look up from my cappuccino at Troia’s 12th-century duomo’s stone rose window—delicate as a paper doily—I realize that, like me, locals over the centuries have glanced at this marvel daily. On my way through the park each morning in Cortona, I greet the dolphins and nymphs cavorting in the fountain. How this lifts you.

Diverse as Italy is, one quality unites: the spirit of Italians. I’ll generalize. In all my trips for this book, I met only one rude person, a hotel receptionist. She wasn’t awful, just abrupt and distant. Immune to friendly overtures.

But the norm prevails. Chefs come out to talk, the museum guard wants to express his opinion about Giotto, the priest wanders around the church with you, the cheesemonger offers tastes, the innkeeper gives a jar of jam, the driver detours to show you his favorite hill town. There’s a palpable generosity.

After you’ve tasted two gelatos, the maker sends over his pistachio. You must try! After-dinner herbal concoctions—specialty of the house—appear after the check: a gift. Those old monks kneeling on cold stone floors devised liqueurs to warm them, using any old plant at hand: pine needles, fennel seeds, olive leaves, angelica roots, and bark. And they work, these digestivi. Evenings end on a prolonged, mellow note.

The other quality that seems to traverse the regions—the battuto, the back-and-forth banter—is key to understanding Italy. (How brilliantly Ernest Hemingway captures this in A Farewell to Arms.) Everywhere I travel, people love the play, the one-up, the fun to be had from encountering you. Make a clever comeback, initiate a joke, and you’re in. It’s part of the exuberance of daily contact. I always notice that I may say buon giorno, but the Italian I’m meeting says BUON GIORNO, louder, arms extended, drawing emphasis on the “gior-,” as though you are the one person most desirable to see on this incredible morning.

You have only to reach out to be brought into a circle of warmth, even if momentarily. This causes you to remember that barista in that tiny village, the signora who cut your hair in Bologna, the dentist in the Veneto who joked as he saved your cracked crown. (I remember them well!)

Travel is always a leap of faith into new worlds: 20 of them in Italy. Isn’t that exciting? Each region remains unique. What’s not yet known lies shimmering before you. — Frances Mayes

From the book Always Italy: An Illustrated Grand Tour by Frances Mayes with Ondine Cohane. Available March 31, 2020 from National Geographic Books wherever books are sold. Reprinted with permission.