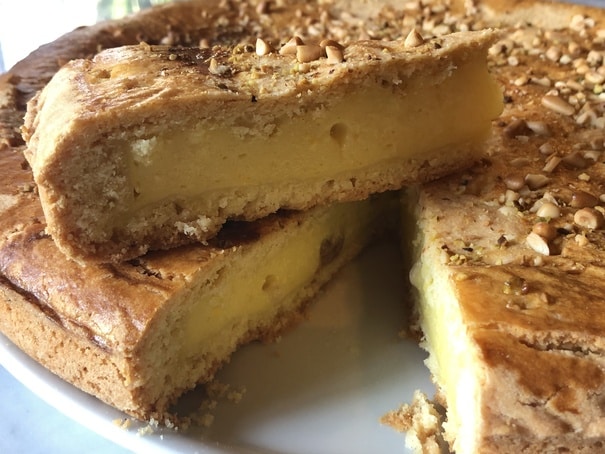 This article originally appeared in the June/July 2019 issue of Dream of Italy.

This traditional cake, which is filled with custard, is a Tuscan favorite known as Torta della Nonna. As with most Italian classics, everyone’s nonna has their own secret recipe… but here’s ours!

As far as we are concerned, my mother Maura’s Torta della Nonna is the best in all of Tuscany. This recipe has been handed down for the generations, from mother to daughter, and its secret is the use of fresh and high-quality products such as eggs of Valdarno chickens, raised to organic standards and fed genuinely.

Thanks to the great popularity in restaurants, the origins of this dessert have been lost. According to some records, the real origin of this dessert is to be attributed to the Aretino territory, while others opt for a more recent Florentine origin.

The history says that the cake was conceived and realized by Guido Samorini, a Florentine chef and restaurateur. Some customers, tired of the few suggestions that the restaurant offered, asked him to surprise them the following week with a new recipe. Samorini then, offered this simple cake “which gave so much pleasure in taste and novelty”.

However, there is a passage by historian and cookbook author Pellegrino Artusi suggesting that the grandmother’s cake already existed many years before: “… I found the dessert with pine nuts and custard cream a tasty pie…”

One of the variations of this dessert is Torta del Nonno, with the addition of cocoa and the use of almonds instead of pine nuts. Other variants include cherries inside the cream. — Vittorio Cammori

Ingredients for the pastry

Ingredients for the filling

Ingredients for the topping

1. Start by making the pastry: Mix together the flour and baking powder, then rub in the butter with your fingers. Next, stir in the sugar and zest, then mix in the vanilla and whole egg and yolk, water and bring the pastry together. Wrap and chill for 30 minutes.
2. Next, make the filling: Heat the milk and lemon zest until nearly boiling. Meanwhile, put the eggs, sugar, vanilla extract, corn starch and flour into a bowl. Whisk together to combine. Gradually whisk in the hot milk mixture, then scrape contents back into the empty pan. Return pan to the heat and cook, whisking constantly, until the mixture is thick. Take off heat, add raisins and leave to cool completely.
3. Preheat oven to 350 degrees. Lightly flour a work surface and roll out two-thirds of the pastry and cut it according to baking tray. Whisk the filling to break it up, then spoon into the pastry base and spread to level. Trim the lining pastry (if necessary) so it comes about ¾ inch above the filling, then gently fold the pastry on to the filling.
4. Next, roll out the remaining pastry on a lightly floured surface and cut out a round. Lay on top of the filling and press edges lightly to seal. Sprinkle over the pine nuts and press them down gently.
5. Bake until nicely golden (about 50 minutes). Leave to cool for 10 minutes.
6. To serve, dust the cake with icing sugar.