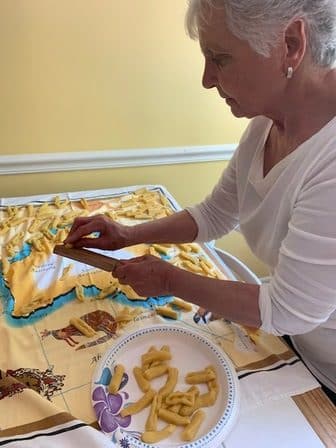 This article originally appeared in the June/July 2019 issue of Dream of Italy.

Norman castles, medieval aqueducts and Baroque churches around the town of Arena are like hidden surprises around every curve. My nanna (Calabrese way to say nonna) Maria was born in this tiny mountainous town in Calabria. Arena was a colony under Ancient Greece so there are thousands of years of history packed into every corner of the town.

Arena was full of people when Nanna was a little girl, but after World War II, the residents started migrating in hopes of finding work abroad or in Northern Italy. The Arenesi people are very proud of their roots and no matter where they are in the world, they continue their food traditions and even have yearly reunions with their paesani to reminisce about the old times and ensure their traditions reach the new generation.

Arena today has half the inhabitants it had when my nanna was a little girl. Back then there were about 3,000 people in the town and everyone knew everyone and was willing to help each other through the hard times. Even this recipe carries with it the memories of the community cooking together.

Nanna Maria makes these turdilli throughout the year and they are a staple in my family, but when she was a little girl in Arena, they made them only during Carnevale. All the neighbors would get together to make them in a big batch because no one family had enough ingredients to make the cookies on their own. Someone would bring some eggs, someone would bring flour. Then they would make the cookies all together and divide up the cookies to enjoy with their families.

Carnevale street performers used to come to our houses and visit and perform for us in the streets and we would cheer and give them cookies if they put on a good show. –– Daniele Schinella

1. Mix dough and roll into thick strips about ½ inch thick
2. Cut strips into pieces about 1 ½ inches long
3. Roll the pieces on a basket or a gnocchi board to make the line designs
4. Deep fry in vegetable oil until they are golden