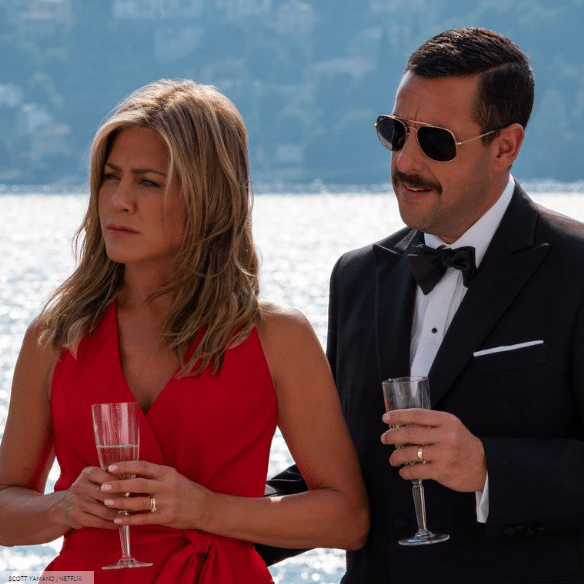 Italy’s magnificent Lake Como is one of the backdrops for the new Jennifer Aniston and Adam Sandler movie premiering on Netflix on June 14. Murder Mystery is an “update on the classic whodunit” and it follows the story of married New York couple Audrey and Nick on their long-overdue honeymoon.

Audrey is a fan of murder mystery stories and she finds herself smack in the middle of one while on vacation. This movie has all the charm of a summertime European vacation and all the twists and turns of a murder mystery like a real-life game of Clue set overseas. See the couple race along winding Italian roads in sports cars on the shores of Lake Como, and explore (and hide on) the streets of some of Italy’s most charming towns. Wanderlust is sure to ensue after seeing the picturesque scenes, even if the on-screen couple’s luck is less than jealousy-inducing throughout the film.

A slew of mysterious characters enter the scene like millionaire Charles, played by Luke Evans, who befriends the couple on a flight and invites them aboard a “Super Yacht” where everything goes wrong when the yacht’s billionaire owner Malcolm Quince turns up dead. Someone on board tries to frame Nick and Audrey and they find themselves involved in a high-speed chase in a red Ferrari Testarossa, dodging gun shots and with their faces plastered all over international news.

Filming took place mostly around Lake Como, in the towns of Argegno and Como and on the Italian Riviera in Santa Margherita Ligure and where many local businesses were closed to the public during shooting to make room for the numerous film crew and cast to stay, dine and experience the cities. Residents of Como and neighboring towns had to deal with multiple blocked streets and intense traffic during the summer of 2018. The people of Argegno played witness to a car chase scene gone wrong resulting in a damaged Ferrari and the need to call for two back-up Testarossa to complete filming.

During August of 2018, Aniston and Sandler were spotted strolling hand-in-hand on the streets of Milan and in the shore towns of Lake Como with Jennifer sporting a floral sundress and espadrilles and Sandler in a moustache and cargo shorts looking every bit the part of American tourists in one of the most fashionable countries in the world. Filming also took place at Milan’s Malpensa Airport where amongst the busy airport crowds the two actors stood out and caught the attention of people passing by.

During shooting, Sandler and Aniston got to do something on many people’s Italy bucket list. They were invited to George Clooney’s famous Lake Como abode for a dinner party. Jennifer, Adam and his wife arrived with flowers and a bottle of wine as they stepped off the water taxi to the Clooney’s estate. The Clooney family served homemade pizza to a star-studded yet intimate guest list including U2 singer Bono.

Jennifer Aniston and Adam Sandler bring their classic comedic style (which we fell in love with in their previous film Just Go With It) to this film which can be streamed on Netflix starting June 14 at midnight E.T. Watch it on any screen capable of streaming Netflix at home, on a plane, even on a billionaire’s yacht. –Danielle Abbazia