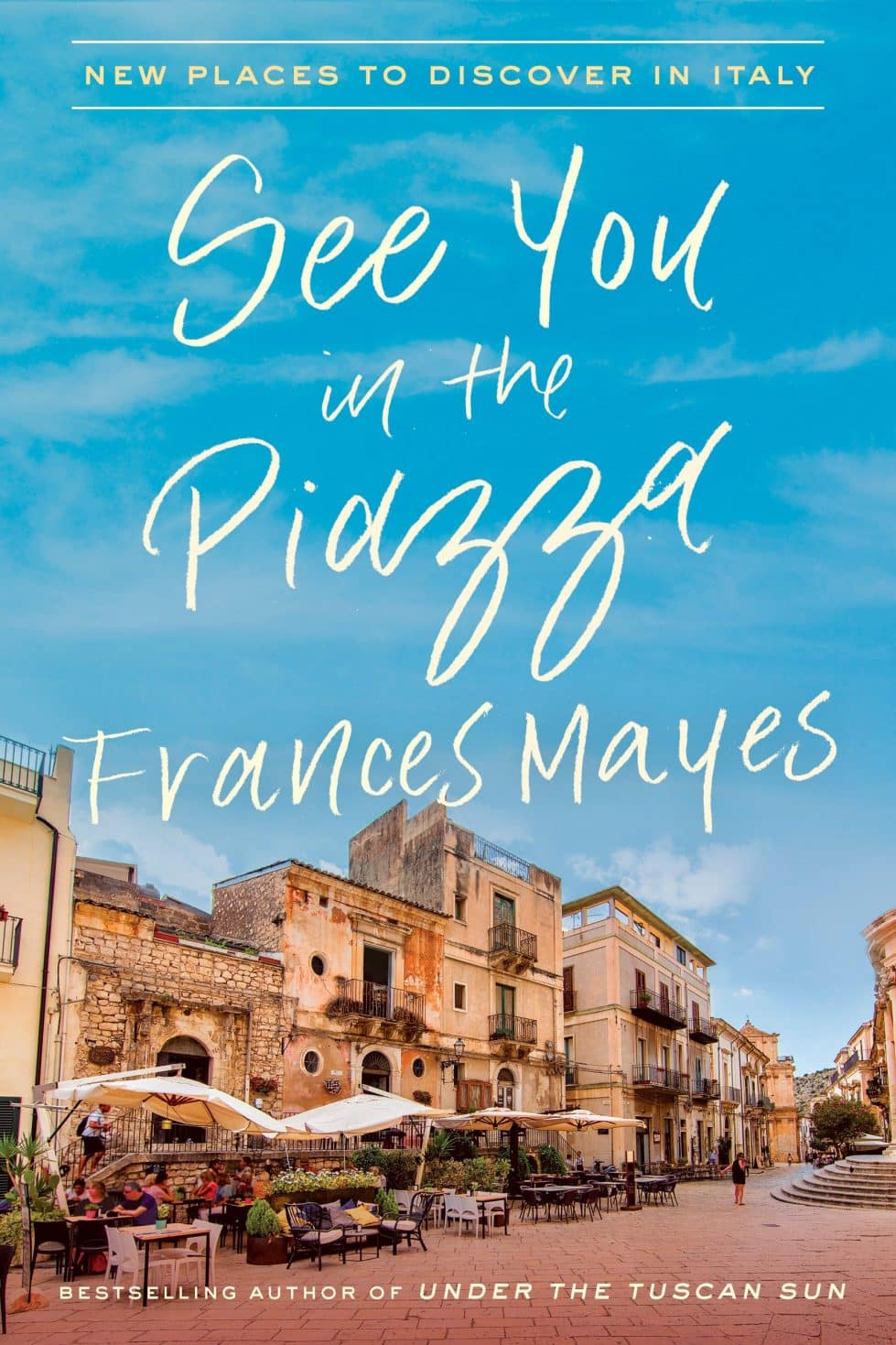 We had our books club with author Frances Mayes on June 5, 2019 to discuss her book See You In The Piazza.  Frances is featured in the new Dream of Italy Tuscan Sun Special. Part 1 and Part 2 of the video are available on Facebook.

You can purchase a copy here, but first enjoy an excerpt:

The waiter slides toward me a clear little glass layered with cream, chocolate, and coffee. Sip the layers and you taste Torino. The bicerin—dialect for small glass—has come to be synonymous with the many atmospheric cafés that are the city’s life blood. Torino is flush with regal boulevards and piazzas ringed with these delicious haunts.

I’m at the wood-paneled Caffè Al Bicerin, intimate, with candles on tiny marble tables. In this very place, someone in 1763 first concocted the bicerin, a wickedly sumptuous drink. I like a place that remembers a coffee drink invented 256 years ago.

I’ve slipped into other historic cafés to sample their bicerin or lemonade or cappuccino. Bliss. There’s Caffè Torino under the grand arcades, where the great Cesare Pavese, who lived nearby, used to meet other writers; Caffè Mulassano, with a marble bar and bentwood chairs, said to have the best espresso in town; Baratti e Milano, more chocolate-and confection-oriented than the others but with an old-world air; and Caffè San Carlo, all gilt and columns and statues.

In late afternoon, the cafés serve aperitivi. No surprise: Campari and vermouths such as Punt e Mes were all invented in Torino. Order a drink and you’re welcome to a lavish buffet of stuzzichini—crostini, olives, chips, focaccia, prosciutto, slices of omelet, and grissini, bread sticks (also invented in Torino). This interlude previews dinner. Which is glorious to anticipate. Torino restaurants are up there with the best in Italy.

Late Morning, Ed and William, who’ve been out walking, meet me under the arcades at Caffè Torino. They are impressed by its bodacious chandeliers, smooth waitstaff, and medallion of a rampant bull inlaid in the flagstones outside the door. This is a perfect perch for watching the human parade. We order cappuccino, then
tramezzini, the triangular half sandwiches made of trimmed, soft white bread—the kind of air bread we usually scorn.

“These were invented in Torino,” I tell them. “At Caffè Mulassano. The weird poet D’Annunzio made up the name . . .” Mine is ham and cheese.
“Tramezzo, a divider. Across the middle,” Ed says. “The -ino or -ini is the diminutive.”
“Across the middle of the morning or across the corners of the bread?” William asks.
“Who knows? It was easier to say than the popular ‘English tea sandwich.’ ”
“Everything was invented in Torino?” William concludes.

Unlike panini, the tramezzini usually have mayonnaise. Almost all bars, train stations, and cafés serve a variety. Ed took to them right away, especially the tuna and olive for a mid-morning snack. Spread out on the table, our books on Piemonte and the poems of Pavese. Never much of a café sitter, I could while away the morning like this. A well-dressed businessman grinds his foot over the balls of the gold bull. Not sure how that brings the good luck it’s reputed to. We stroll along Via Garibaldi and Via Roma, checking out the designer shops (oh, no! William is attracted to Louis Vuitton belts). Torino has eighteen kilometers of covered walkways, a reminder that inclement weather can pour in from the Alps. The chic shops are punctuated by more appealing cafés in glass-roofed Galleria San Federico, where we happen upon Cinema Lux, an Art Nouveau theater. In smaller streets we find Libreria Internazionale Luxemburg, a vintage British bookstore and a cool contemporary café and art space.

Where are the tourists? we wonder. They’re all in Florence. We came to Torino last summer with William and loved every minute of the four days we spent blessedly free from mobs. We all agreed—we needed more time here. As we begin a trip into Piemonte, we decided to light here again. What a fantastic place to bring a child or young adult! Highlights from our first visit:

WE TOOK A TAXI OUT TO THE MUSEO NAZIONALE DELL’AUTOMOBILE. Even if you’re not a car fan, you have to swoon at the design genius on display. The emphasis is on vintage Fiat, Lancia, and Alfa Romeo, though there are Bugattis, Ferraris, and others. A long-time Alfista (one who adores Alfas), Ed examined each.

EATALY: the Italian food emporium near the car museum. We walked there from the car museum to have lunch and to look at the amazing range of olive oil, pasta, honey, jam, wine, and other products, all from this country.

MUSEO EGIZIO: after Cairo, the largest Egyptian museum in the world. Torino began collecting in 1630, and now displays 6,500 items (with another 26,000 in storage). The museum is located right in the centro.

MUSEO NAZIONALE DEL CINEMA IN THE MOLE ANTONELLIANA, where on the ground floor you can watch movie clips in lounge chairs with headphones. You spiral up to three floors of changing displays; many are interactive, demonstrating the history of photography and film. It’s a lively tour. The glass-walled elevator takes you to the tower for a view over Torino and the Alps in the distance. I didn’t go; it looked claustrophobic and harrowing. Ed and William did, and they reported it was claustrophobic and harrowing.

VIA PO: Stroll along this grand boulevard lined with palazzi and arrive at the Po River. The rarefied French influence of the House of Savoy, which ruled Italy from 1861 to 1946, is everywhere in Torino. A gaily lit string of cafés beckons as evening falls. A moment to time-travel to nineteenth-century Paris.

WE ARE STAYING at the home of Pavese! By chance, I came across a listing for a B&B called La Luna e i Falò (The Moon and the Bonfires is the title of one of Pavese’s novels). I was shocked to see that the B& B had been his home. With awe, I reserved two of its three rooms. His own copies of his paperbacks lie on the hall table. His small writing room (or was it his dining room?) is now the guests’ sitting room. Our bedroom, furnished with antiques, blue toile fabrics, a table in front of a window, looks out at the graceful balconies that festoon the elegant houses across the street. I open the window and look at what Pavese looked at. Where he smoked and smoked, and wrote and wrote. Where he sipped Campari and left his slippers by the chair. The current dining room, where we’re served afternoon tea and breakfast at round tables with flowers and silver, must have been his living room. There would have been books and paintings. If he appeared today, what would he think? Yes, the young woman who checked us in says, yes, he lived here in 1950 when he committed suicide. “Not at home,” she adds quickly. “He locked this door for the last time and checked into Hotel Roma near the train station. Overdose of sleeping pills. He was two weeks shy of forty-two.” All that passion and romance and darkness and profundity and work silenced by a handful of pills. There’s an undercurrent of loss running through his poems but a swifter stream of longing and acute love for people. I tried this translation of his poem “La Casa”:

The House
The man alone listens to the calm voice
with eyes half-closed, almost a breath
blowing on the face, a friendly breath
that rises, incredibly, from a time gone.
The man alone listens to the ancient voice
that his fathers, in their time, have heard, clear
and absorbed, a voice that like the green
of the ponds and the hills darkens at evening.
The man alone knows a shadow voice,
caressing, that rises in the calm tones
of a secret spring: he drinks it attentively,
eyes closed, and it doesn’t seem past.
And the voice that one day stopped the father
of his father, and everyone of dead blood.
A woman’s voice that sings secretly
At the threshold of the house, to the falling dark.

I like his poem. He is trying to express something that cannot really be said. Translating feels like pouring water through a sieve. Two lines don’t go happily into English. Perhaps aren’t that happy in Italian, either. That’s okay. Pavese has pulled me into an intensely private moment. A woman sings. The song has been heard by his father and his father’s father before. The threshold—now and then, life and death, love and loss. The song spirals in his DNA. A lullaby, a love song, a dirge.

I like his house, too. There’s a squeak to a floorboard, a panel of sunlight falling in at an angle, a gray quietness where something might happen. And it did. Beginning with Walt Whitman, Pavese worked vigorously on translations, in addition to his own novels and poetry. Moby-Dick! From this small room, he brought contemporary American fiction to Italy: Sinclair Lewis, John Dos Passos, Sherwood Anderson, William Faulkner, Gertrude Stein. Nights of work. Then he would take long walks in the rain.

At lunch we stop at Pepino on Piazza Carignano and sit outside for quick vegetable salads. William notices an old, wheeled ice cream cart parked near the door and people at the next table ordering what we called “nuggets” when I was growing up. We find out that the Pinguino, penguin, the original chocolate-dipped ice cream on a stick, was invented here in 1939. Pepino has been making gelato since 1884. “That list of Torino inventions is getting longer,” William remarks. I think for years invented in Torino will be a family saying.

*Excerpted with permission from SEE YOU IN THE PIAZZA by Frances Mayes. Published by Crown, an imprint of the Crown Publishing Group, a division of Penguin Random House LLC. Copyright 2019 by Frances Mayes.