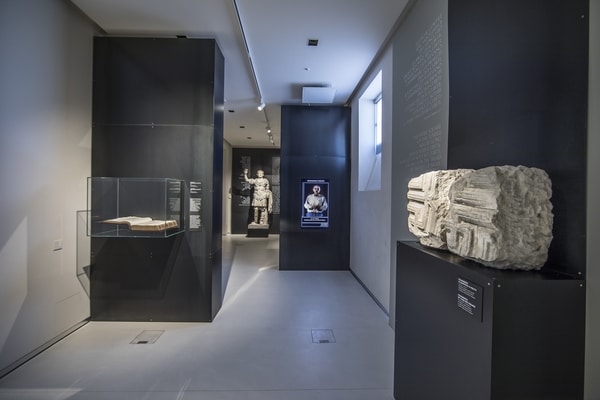 This article originally appeared in the August 2018 issue of Dream of Italy.

During World War II, the city prison in Ferrara, a city of about 133,000 between Bologna and Venice, detained Jews who came from Ferrara’s ghetto and who were later sent to concentration camps. Now, that same prison has been converted to Italy’s first museum dedicated to Jewish history.

The National Museum of Italian Judaism and the Shoah (MEIS) opened in December 2017 with a narrative, immersive and multimedia approach, incorporating interactive maps, timelines, video testimonials from Italian Jews, and minute-long films containing information from scholars. The museum’s rooms are mostly empty of artifacts, choosing instead to tell the Italian-Jewish story through narration.

That said, the museum does have some Jewish artifacts that were found throughout Italy. One such piece, on loan from the National Archaeological Museum of Naples, is the epitaph of Claudia Aster, a 25-year-old brought from Jerusalem to Rome as a slave.

The temporary exhibit space was formerly the men’s quarters of the prison. The run-down women’s building was razed and, in the space where it once stood, is a garden called the “Maze of Questions” that explains Jewish dietary laws as visitors walk among planted herbs.

Museum director Simonetta Della Seta told the Washington Post that MEIS is not a Jewish museum, but rather “a national museum dedicated to Jews.” Nor is it a memorial museum, she says, because “If you’re going to speak about Jews as dead people, it’s not me” – as the museum focuses on the way Jews lived in Italy for thousands of years instead of how they suffered.

Italy has the oldest Jewish community in the Western world, dating back to 161 BC. Romans conquered Jerusalem 200 years later, and by 80 AD Romans had brought Jewish slaves from present-day Israel and had them build the Colosseum. In medieval times, after the Spanish Inquisition forced Jews to either convert to Catholicism or flee Spain, the ruling monarchs in Ferrara – at the time, the Este family – encouraged Jews to settle in the city, beginning Ferrara’s 1,000-year-old connection to Jewish history.

However, like in the rest of Italy, Ferrara began to withdraw its welcome to Jews during World War II, forcing them to live first in ghettos and then in the city’s prison before sending them to concentration camps. About 7,500 Italian Jews died in the Holocaust, and about 420 were killed in military combat.

At its most populous in 1800, Ferrara’s Jewish community comprised about 2,000 people; today, only a few dozen Jews live in the city. In all of Italy, the Jewish-Italian population at its height numbered about 50,000; today it is about 28,000.

A national museum of Jewish history has been a long time coming: MEIS is the result of a 2003 law passed by the Italian Parliament mandating the establishment of a national Jewish museum. This year is the 80th anniversary of Italy’s anti-Jewish laws, which were put into place in 1938 – and, at a time when much of the Western world is grappling with the resurgence of anti-Semitism and nationalist ideology, MEIS brings into focus both the past and present.

In response to the museum’s opening, Ferrara is once again becoming a center of Jewish culture. The city offers a self-guided walking tour of Jewish landmarks, including the synagogue, cemetery, and former ghetto, with a map available at the city tourist office.

In the next three years, the museum will add five new glass buildings in the shape of books – one to represent each book of the Torah – that will contain a kosher restaurant, auditorium, educational and youth spaces, and an archive.