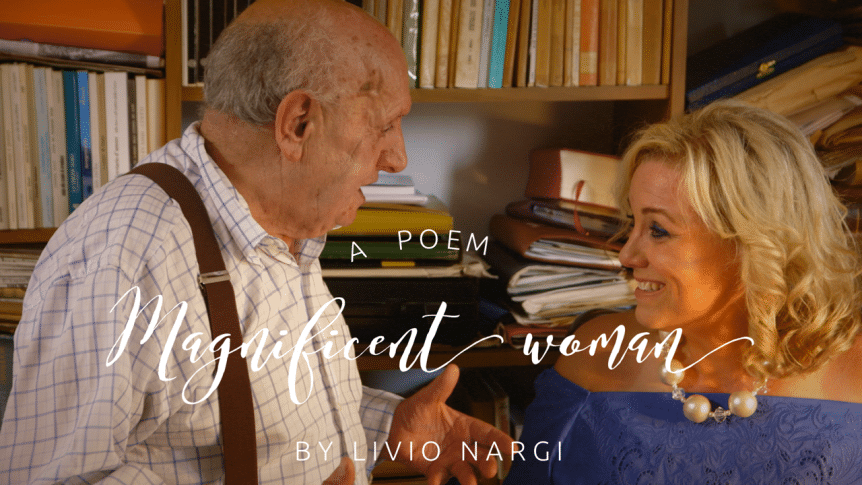 For the Castelvetere sul Calore episode of my PBS travel series, I returned to my ancestral hometown 22 years after my mother and I had first laid eyes on it and more than 100 years after my great-grandfather left Castelvetere for America. That day my mother and I arrived in July 1995, we met our distant cousin Livio Nargi, historian, author and poet, and became fast friends. If you’ve seen the episode, Livio opens it with one of his gorgeous poems, his love letter to Castelvetere. He recently sent me two poems he wrote in honor of my most recent return to my ancestral hometown. I am not exaggerating when I say these are one of the most beautiful gifts I have ever received and truly capture my love for this rich land. – Kathy McCabe

Also read Livio’s other exquisite poem: The American in Castelvetere

Magnificent Woman
(The DNA of the American)

Coiled, in the July heat,
the breeze murmers,
on the Irpinian mountains.
Delicate,
it caresses the green lakes
of hills and valleys
and steals from them the smell
to distribute in the heavens,
to gift to the world.

She brings with her, memories,
the delightful daughter of the Calore Valley
and brings light to the polished houses,
kind poetry to the ancient village.

She raises, trembling,
her silver voice
and her song spreads
-divine echo-
in the Land of her Fathers
to scream -joyfully-:
‘’You are great and mighty…
You are always my People…
I love you,
and… Livio most of all.
I take you with me wherever I go…
You are my haven of love!’’