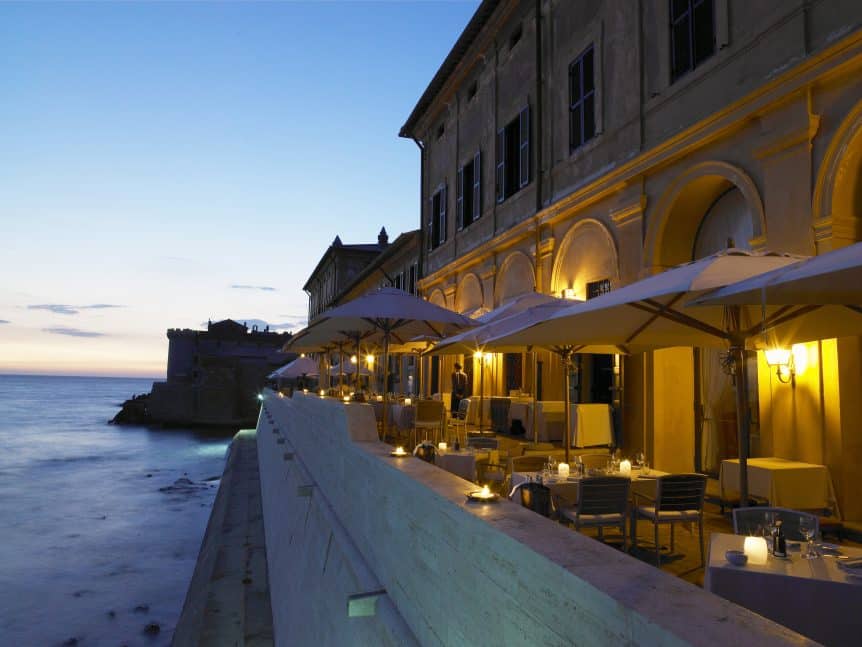 In the June/July 2018 issue – Special Report: Luxury Lodgings in Tuscany – travel advisor Kelly Millington writes about four of her favorite properties in the region. But there’s one more she wanted to share with our audience as it’s tantalizingly close to Tuscany but actually in the region of Lazio so we’re running it here:

Though technically not in Tuscany, I wanted finally to include La Posta Vecchia, which is a five-star luxury hotel in the coastal town of Ladispoli. This oasis of calm is less than 30 minutes from Rome’s Fiumicino Airport and overlooks the Tyrrhenian Sea. It is the perfect place to start or complete your journey through Tuscany.

Though the villa has a long history dating back to the 17th century, its most recent notable owner was billionaire John Paul Getty who filled his seaside home with a treasure trove of Renaissance art and furniture.

Each of the 19 generously sized rooms is individually designed and beautifully appointed featuring pieces from Mr. Getty’s private collection.  No two rooms are alike.

The center of Rome is only 19 miles but the hustle and bustle feels a world way. This is a place to savor and relax. I can think of nothing better than arriving off of an overnight flight and heading straight to the pool for a dip followed by a revitalizing massage in their gorgeous spa LPV Health and Beauty Club.

Being a history buff, one of my favorite features of the hotel is the guided tour of the on-site Roman museum. During Getty’s restoration of the villa, a Roman villa dating back to the 2nd century was found. The authorities carried out extensive excavation and today guests can have a private viewing in the museum in the basement where they will see ancient walls, mosaics, African and Greek marble among other artifacts. Some guest may even prefer to arrange a private dinner in the museum.

My most memorable meal here was at The Cesar gourmet restaurant presided over by Chef Antonio Magliulo. Sipping a pre-dinner cocktail and dining on Chef Antonio’s culinary delights are the perfect ending to the day

For those who want to channel their inner J. Paul Getty or celebrate a lottery win, there is the exceptional opportunity to take the entire property for exclusive use in the off-season. What a wonderful venue to host a special event!