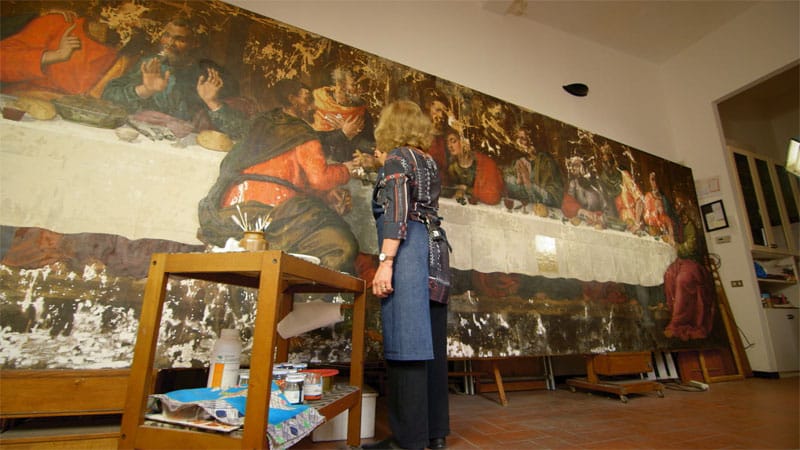 During the Renaissance in the 1570s, Plautilla Nelli, a nun and a self-taught artist, painted the only Last Supper to be painted by a woman. Nelli’s artworks were unusual for her time because of their large scale – The Last Supper is 23 feet long – and religious themes; she was also the first woman to sign her name on her works.

We featured Nelli’s story and her role in a new movement to shed light on historic women artists in the Florence episode of Dream of Italy on PBS. Nelli also signed the Last Supper with a call to action saying “Pray for the paintress,” which U.S.-based nonprofit Advancing Women Artists (AWA) has turned into a fundraiser for its four-year-long restoration of the painting, which began in 2015. You can watch the segment here:

AWA, which has focused on restoring art by Florentine women for more than a decade, launched an “Adopt an Apostle” campaign to fund the restoration of Nelli’s Last Supper. The campaign is the second phase of the four-year restoration project, called “TheFirstLast,” in collaboration with the city of Florence. Its crowdfunding initiative collected $65,000 from 410 donors in 19 countries.

Now, the “Adopt an Apostle” campaign is allowing donors to “adopt” an apostle for $10,000 to fund the rest of the project. While Jesus and nine of the Apostles have been “adopted,” Thomas, Simon and Philip have yet to find donors. After the restoration is completed in October 2019, the painting will hang in the Museum of Santa Maria Novella in Florence.

Florence Mayor Dario Nardella said, “I hope that all the Apostles will soon be ‘adopted’, and that the restoration will soon be completed. I appeal to the generosity of the Florentines, so that together with citizens from other countries can give ‘The Last Supper’ new life. Plautilla Nelli was the most important female painter of the Florentine Renaissance and her city will pay her homage by exhibiting this work in the Santa Maria Novella Museum Complex.” — Elaine Murphy