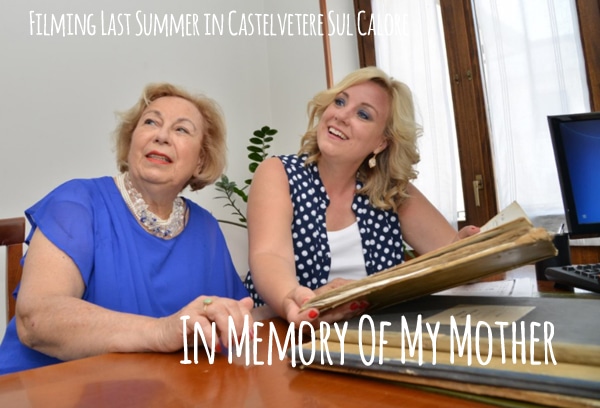 You haven’t heard from me in awhile…

It is because my mother – whom I have written about before because Italy was “our thing” and who also appears in the Castelvetere episode of season two of Dream of Italy – passed away on April 16th. Though she had cancer, she did miraculously well for several years, buoyed by what her beloved doctor called her “almost unrealistic positivity.” Things took a turn for the worse in March.

Kathleen Nargi McCabe, for whom I was named, was the most ALIVE person I had ever known. Her zest for life to be remarkable. Her death was a shock to all and leaves a giant void in our universe. To those of you who have lost parents whom you were close to, only now that I have joined your club, do I fully understand the loss that you can never be prepared for and never really get over.

My mom was brave, vivacious, curious, funny, kind and always loved an adventure. She made friends everywhere and she was honest and loyal. If you didn’t already meet her in the Castelvetere sul Calore episode of season two of Dream of Italy, I’d love you to watch sometime:

It was our first trip to Italy together in 1995 when we rediscovered her grandfather’s ancestral village that set the course for my life. There were dozens of trips together to follow and Dream of Italy was born along the way. My mother was my biggest champion and believed in my dreams. She pushed me to fly.

We took a staggering two dozen trips (I took her on many of my work trips) together to every corner of Italy from Siena to Sardinia. We dressed up for Carnevale in Venice and watched the open-air opera in Verona. My mother and I were incredibly close (as I am to my father too – I’m an only child) and our trips were filled with much laughter and some fighting, mostly over what she thought was my crazy driving. Hey, when in Italy, drive like the Italians!

One night, years ago, when we were laying in our beds in a hotel room in Florence, we started giggling about something (I wish I could remember!) and it became funnier and funnier and we began laughing uncontrollably that we were crying. Next thing you know there’s a call from the front desk – a noise complaint from the room next door. That only made us laugh harder. We had such fun.

The greatest gift of my life was to have the miracle of returning to Italy with her (and my dad) to film for the PBS series last summer. Talk about bookends – our first and last trips to Italy over the span of 22 years – were to Castelvetere.

When she was getting ready to leave us, I asked her what she saw. She said “the Madonna” and I told her to follow her home. Madonna delle Grazie is the patron saint of Castelvetere; my mother had prayed to her and we walked behind her statue in a procession in the town last July. Really, I am still so stunned and comforted that the Madonna helped my mother on her final journey.

I pray that I do.