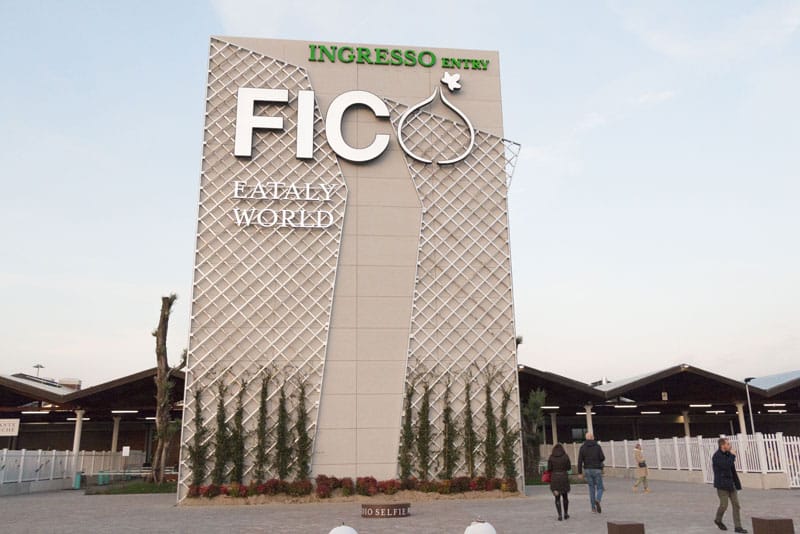 This article appeared in the November 2017 of Dream of Italy. Updated 2018.

FICO Eataly World, a 25-acre interactive food park in Bologna was dubbed the “Disneyland of Food” by the international press, even before opening in November of 2017. This made me a bit skeptical before I made a pre-opening media visit, but I ended up impressed.  Yes, the best of Italy’s culinary traditions are indeed found at the source, in the kitchen of a nonna or at a roadside stand deep in the countryside; at places that don’t have brand names or worldwide recognition.

If you can adjust your expectations, Eataly World might surprise you. It is fun and well-curated and there aren’t any spaghetti-themed roller coasters – no rides in fact, the most kitschy thing might be the miniature golf course in the shape of Italy.

Eataly World follows the production process from farm to table. There’s a working farm on site with animals you can visit (I’m told none are actually consumed), vegetable fields and even an area for truffle hunting (complete with dogs). Forty on-site small factories make everything from cheese to pasta. There are six interactive multimedia centers exploring the themes of man’s relation to fire, earth, animals, soil, bottle and the future.

The highlight of Eataly World though is in the eating. There are more than 45 trattorias, restaurants and street food stands, curated from across the country to demonstrate that there is no one Italian cuisine but rather thousands of local and regional specialties. They include:

Some of the brands represented are familiar to well-traveled Italophiles; Lavazza coffee, Venchi chocolate and Urbani truffles all have a presence here. The attraction is having so many choices in one place.

As you can imagine, the largest agrifood park in the world is huge. There are free three-wheeled Bianchi bikes for visitors to use and a tram that circles the property. Interacting with food and the food process is a big theme here and there are some 30 events and 50 cooking classes, like The Making of Gragano Pasta and The Life of Bees, offered daily.

Bologna is a food destination unto itself and well worth visiting for the numerous food experiences available in the city. Eataly World is just another reason to go to Bologna. I recommend at least spending a few days there but the high-speed train from Florence to Bologna takes only 30 minutes (the drive would be 90 minutes) so it also makes for a good day trip.

Eataly World
Via Paolo Canali, 8
Bologna
www.eatalyworld.com
Open daily, 10 a.m. to midnight
Free admission; 10€ for guided tour of the six interactive carousels; 15€ for a guided tour of entire park.
Daily events and classes (and their prices) can be found on the website.
There’s a shuttle bus (7€ round-trip) from the train station to Eataly World every 20 to 30 minutes. Free parking on site.