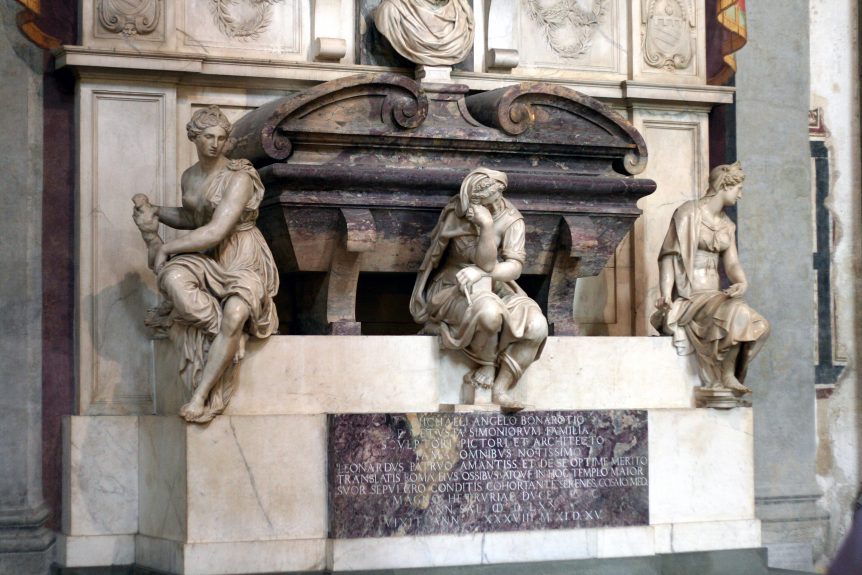 “When I walk up the piazza of Santa Croce I feel as if it were not a Florentine nor an European church but a church built by and for the human race. I feel equally at home within its walls as the Grand duke, so hospitably sound to me the names of its mighty dead. Buonarroti and Galileo lived for us all.“

Both the tomb and the altarpiece were designed by Giorgio Vasari – who also built the Vasari Corridor in Florence in 1564 – and commissioned by Michelangelo’s nephew and heir Lionardo Buonarroti. Vasari designed Michelangelo’s tomb in 1564, a grand stone memorial that is adorned with paintings and sculptures but that has accumulated layers of dust and grime since its last cleaning 20 years ago. The sculpted figures sitting near its base mourn Michelangelo along with visitors and personify three of the subjects that he mastered: painting, sculpture, and architecture.

On the wooden altarpiece is a Vasari painting of Jesus and Saint Veronica on the way to Calvary, dating to 1572. The wood, including the painting’s original frame, is in dire need of repair as it is infested with termites and the oil paint is cracked and yellowed from varnish. Further, a recent study found that the altarpiece may also feature a hidden portrait of Michelangelo looking toward his tomb, which Vasari is thought to have painted as a tribute to his idol and as a way to connect the two monuments. The altarpiece will be cleaned and repaired, and researchers will use technology to determine what’s hidden behind the painting.

Born Michelangelo di Lodovico Buonarroti Simoni in Tuscany in 1475, the Renaissance master lived in the Santa Croce neighborhood as a young adult, and his family attended church at the Basilica di Santa Croce. When he died in 1564 in Rome, his body was laid in the Church of Santissimi Apostoli. However, Florentines were adamant about bringing his remains home, so Lionardo enlisted the help of Duke Cosimo I de’ Medici to steal Michelangelo’s body and smuggle it back to Florence, where it was laid in the current tomb.

Restoration work is scheduled to begin in November and to be completed by March 6, 2018, the anniversary of Michelangelo’s death.

All financial donors will be acknowledged on the Opera di Santa Croce’s website and in its historical archives. Those who contribute $5,000 or more will receive special recognition, including having their name inscribed on a plaque in the Basilica, attending a special event when the restoration work is finished, and taking private tours of the Santa Croce complex when they visit Florence. Donations to the Opera di Santa Croce are tax-deductible in the U.S. and can be made through the organization’s website.