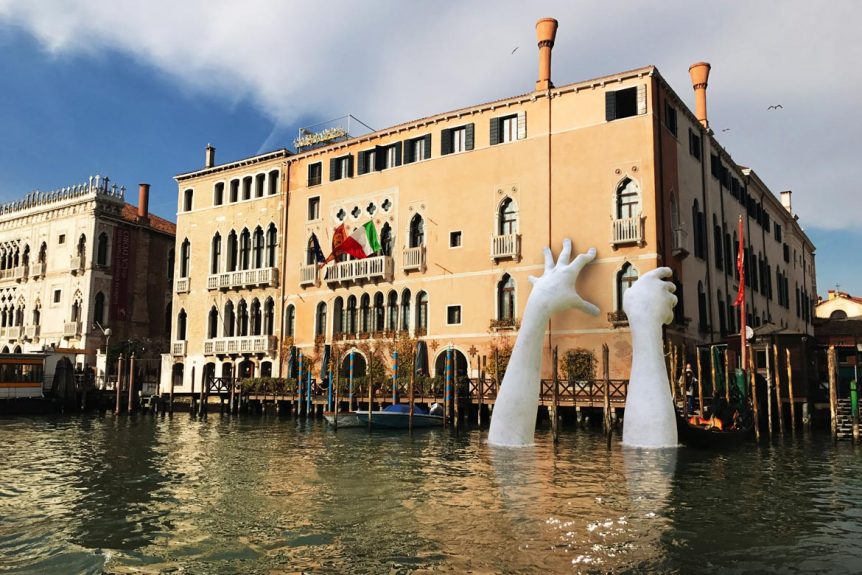 The Venice Biennale is underway this summer, showcasing contemporary and modern works from 86 countries. An artistic takeover of Venice, the 57th biannual art exhibition transforms the buildings, streets, courtyards, museums, and palaces of the city into venues to display pieces by artists of a wide range of ages, artistic backgrounds and national origins.

The main event runs through November 26 and is held at the Arsenale, a former military dockyard, and in the national pavilions at the Giardini. Fringe events are scattered throughout churches, palazzos and piazzas in the city to turn the spotlight on both popular and lesser-known parts of Venice.

With a theme of Viva Arte Viva,La Biennale was curated by Christine Macel, who is the Chief Curator at the Musée d’Art Moderne at the Pompidou Centre in Paris and founded the museum’s contemporary art department. Macel intends the theme to convey “a journey from the interiority to infinity.”

Artists from around the world are hosting Open Table events throughout the event at the Giardini and the Arsenale. There, visitors can meet the artists and chat with them about their work over a casual lunch. The Open Table events will also be live-streamed on the Biennale website.

Highlights from international artists include:

Lorenzo Quinn, “Support”
Rising up out of the lagoon to clutch the Ca’ Sagredo hotel, a giant pair of hands brace the building against sinking. To Italian sculptor Lorenzo Quinn, the installation, titled “Support,” represents humans’ ability “to love, to hate, to create, to destroy,” as well as the danger of sinking that Venice faces due to the manmade effects of climate change. With its central location, this piece is getting the most attention of the Biennale and the most people stopping to take photos!
Admission: Free (outdoor exhibit). www.lorenzoquinn.com

Iraq Pavilion, “Archaic”
Iraq’s national entry in the Biennale is in a 19th-century library in the Palazzo Cavalli-Franchetti. The exhibit, titled “Archaic,” explores both the ancient history of Iraq’s landscape and culture, and the country’s current political identity. On display are contemporary pieces from eight Iraqi artists, objects dating back to 6100 BC from the Iraq Museum in Baghdad, and recent paintings that Belgian artist Francis Alys painted while visiting Mosul, a city in northern Iraq that is embroiled in conflict between the Iraqi government and militant ISIS forces.
Admission: Free. ruyafoundation.org

Glasstress
Also in the Palazzo Cavalli-Franchetti is Glasstress, an exhibit of glass art that is back for the fifth time. Pieces made of Murano glass include glass eels by Scottish artist Charles Avery, as well as others by British visual artists Jake and Dinos Chapman and by Chinese artist Ai Weiwei, who most recently installed orange dinghies on the windows of Florence’s Palazzo Strozzi to call attention to the refugee crisis.
Admission: 10€, includes admission to the Berengo Studio on the island of Murano, where the pieces were made. glasstress.org

Future Generation Art Prize
As you might guess, the Future Generation Art Prize celebrates young artists, with this year’s top award of £100,000 for an artist under 35 going to South African Dineo Seshee Bopape. Bopape is known for her installations, made of clay, soil, ash, gold leaf and other natural materials, that often contain sociopolitical and geographical commentary. Work by Bopape as well as 20 other runners-up is on display in the magnificent Palazzo Contarini Polignac, a 15th-century structure on the Grand Canal that has housed artists for centuries, including composers such as Stravinsky.
Admission: Free; runs until August 13. futuregenerationartprize.org

Jan Fabre, “Glass and Bone”
Paying homage to Venice’s infamous pigeons, Belgian artist Jan Fabre has placed a menagerie of glass pigeons – and glass droppings suspended in midair – around the cornice of the Abbey of San Gregorio. Also included in the exhibit are glass skulls with real bird skeletons in their mouths.
Admission: Free. labiennale.org

Sheila Hicks, “Escalade Beyond Chromatic Lands”
In the Arsenale, giant balls of colorful wool are piled up against a wall in a show called “Escalade Beyond Chromatic Lands.” The piece by 83-year-old American Sheila Hicks aims to challenge the dominance of youth culture and return to importance textile arts, which are often promoted and created by older artists.
Admission: A 48-hour ticket to the main pavilions costs 40€. www.labiennale.org

In the South Africa pavilion at the Arsenale is South African Candice Breitz’s film about refugees that reveals the complexity of the issue. The film tells the stories of six people from different countries twice, first narrated by Julianne Moore and Alec Baldwin and then by the refugees themselves.
Admission: A 48-hour ticket to the main pavilions costs 40€. www.labiennale.org