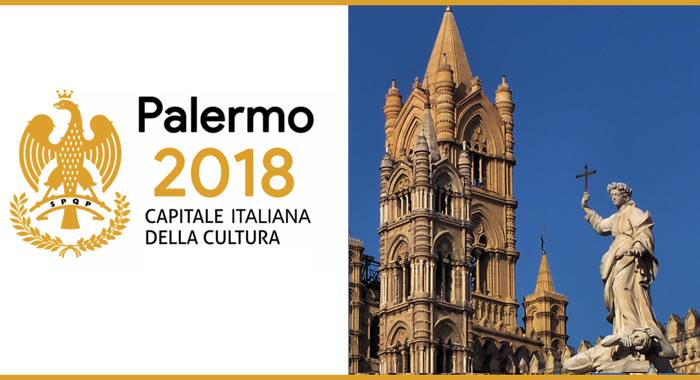 In the April 2017 issue of Dream of Italy, Sicily expert Allison Scola writes extensively about Palermo and its street food. She says not only food, but culture is another big reason to pack your bags and head to Palermo in 2018.

Earlier this year, Italy’s Minister for Cultural Heritage and Art, Dario Franceschini, announced that Palermo will be Italy’s Capital of Culture for 2018. Along with the title, an award of one million euros has been given to the capital city of Sicily to promote cultural activities and invest in its artistic heritage. Certainly, along with the recognition comes a boon in tourism.

“It’s our moment,” said tour guide and author of The Peoples of Sicily, A Multicultural Legacy, Jacqueline Alio. “We are finally starting to make headlines for our glorious history and monuments and not for the mafia.”

Palermo was unanimously chosen by a jury of experts appointed by the Cultural Ministry and led by Stefano Baia Curioni, Bocconi University Professor of Economy and Culture. Other cities under consideration were Alghero, Aquileia, Comacchio, Ercolano, Montebelluna, Recanati, Settimo Torinese, Trento and the western Sicilian towns Erice and Elimo, who entered jointly.

Palermo’s cultural riches are profound, and in recent years, Italy’s fifth largest city has garnered well-deserved attention. In July 2015, along with neighbors Monreale and Cefalù, it was designated a UNESCO World Heritage Site for nine civil and religious structures dating from the era of the Norman kingdom of Sicily that illustrate the socio-cultural syncretism between Western, Islamic and Byzantine cultures.

For the past two years, it has been the home of the annual Festival delle Letterature Migranti, or Festival of Migrant Literature, a happening that presents panels and events throughout the city and involves writers, teachers, students and volunteers discussing the literature of migrating peoples.

“Palermo’s profound history teaches us that a dialogue between peoples is possible,” said tour guide and art historian Chiara Sciortino when asked why she thinks the city was chosen. “Palermitani are children of many peoples, who, despite their diverse languages, religions, and cultures, have engaged in a cooperative dialogue throughout the centuries. It’s always been a welcoming city, and that attitude encourages collaboration and reciprocation, and from that grows beauty, cultural richness, and peace.”

Also in 2018, the Sicilian capital will host Manifesta 12, the 12th addition of the European Biennial of Contemporary Art, previously hosted by Saint Petersburg and Zurich. The honor, Palermo mayor Leoluca Orlando explained, “will be a fantastic opportunity for the city to reinvigorate its local and international identity. It is a moment for Europe to appreciate the significance of its Mediterranean dimension and identity. Manifesta 12 is an opportunity to celebrate Palermo for what it really is: a laboratory for the humanities, arts, and culture.”

Additionally, Palermo’s Teatro Massimo announced a dynamic 2018 opera and performance season that will include Verdi’s Nabucco, Puccini’s Turandot, and the contemporary ballet, Adam’s Passion, composed by Arvo Pärt and designed by renowned stage director and visual artist Robert Wilson. The multiethnic choir Arcobaleno will perform a concert in the legendary hall in conjunction with the Festival delle Letterature Migranti.

Art historian Giulia Scalia said, “The recognition will present many interesting events and exhibitions. I am thrilled because of the work opportunities and exchanges that the designation makes possible.”

Palermo is buzzing with excitement about the selection. This after in December, it was named Italy’s Youth Capital for 2017, declared so for its initiatives supporting young people that are part of a larger, multi-year plan the city has set forth aiming to support the next generation with educational, cultural, and employment opportunities.

“Palermo has great potential, and we Palermitani believe in change,” Sciortino said. “For all of us, this award is reason for hope, pride, and opportunity for improvement and growth.”  Sciortino’s thoughts are reiterated throughout the city—Palermitani are thrilled with the appointment and hope that their example of multicultural inclusion will extend well beyond its year in the spotlight. — Allison Scola

Allison Scola is the owner and curator of Experience Sicily, a boutique tour operator and educational company. For more, visit www.experiencesicily.com