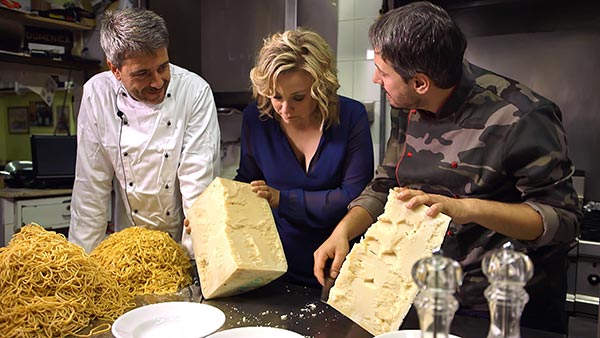 This article originally appeared in the June/July 2015 issue of Dream of Italy. Season Two is now available! This article was updated in 2018.

As you may already know, the first season of the  TV travel series Dream of Italy is currently airing on CreateTV and PBS stations  around the United States.  This subscription newsletter – which I founded in 2002 to bring more authentic advice to Italy travelers – inspired the content and I’m the host and an executive producer of the series.

For five weeks in the fall of 2014, our American and Italian crew traveled from Lake Iseo in the north to Puglia in the south, meeting local Italians – artisans, vintners, hunters, chefs, historians and even cowboys – living their passions.  The goal: introduce travelers to “the real Italy” not usually found in guidebooks. The result: six half-hour episodes on the best of Tuscany, Rome, Umbria, Naples/Amalfi Coast, Piedmont/Lake Iseo and Puglia.

I’ve been to Italy nearly 40 times but experiencing the country I love through filming a television series gave me a new lens (forgive the pun) on what makes Italy so captivating and addictive.  Here are five of very personal highlights from filming.

Italy is synonymous with food. The cuisine is a wonderful entrée to the distinct culture of each corner of the Italian peninsula. I always recommend that travelers schedule at least one cooking class during their trip – better yet, a class in each region that they visit. Why? It is the perfect way to enjoy a truly Italian experience, interact with a local and learn about the geography and history – via food – of the area they are visiting.

In nearly every episode of the series, I met a local chef or food artisan who taught me the particulars of a regional specialty. Pizzaolo Enzo Coccia was an exacting pizza-making instructor in Naples. In Umbria, Salvatore Denaro shared an example of cucina povera (the cuisine of peasants) teaching me how to make maltagliati con ceci.

While learning to make one of Rome’s famous dishes, Cacio e Pepe, I was reminded that Italian cooking, and indeed Italian life, are full of things unseen. Brothers Francesco and Roberto di Felice invited me into the tiny kitchen of their bustling restaurant Da Enzo in the Trastevere neighborhood (pictured above). My mission: to find out why Roman after Roman says Da Enzo might just make the best version of this pasta dish in all of the Eternal City.

This simple, historic dish of peasant farmers seems easy to make with just five ingredients – taglioni, Pecorino Romano cheese, cold water, pepper and … Well, there’s a secret ingredient that I came all the way to Rome to discover. After some cajoling, Francesco comes clean and admits that the fundamental ingredient is lots and lots of love.

That might seem like a cute answer but it couldn’t be more true.  When people ask me why I adore Italy so much, I tell them that visiting Italy reminds me of being a little girl in my Italian-American grandparents’ home which was always filled with the smell of food cooking and indeed, warmth and love.

I’ve been traveling to Italy regularly for 20 years and while of course the country’s heart-stopping vistas are well-etched in my memory, it is the Italians I have met who really stay in my mind. Locals have been the focal point of so many articles in Dream of Italy, but words, though powerful, can’t capture everything that a television camera can. What a joy it was to return and film their unique personalities for the screen.

One of my all-time most treasured memories in Italy is truffle hunting with the Romagnolo brothers in Piedmont in November of 2004. If it is possible that anything could match my passion for Italy, it is my love of dogs (they are preferred for truffle hunting in Italy as they are considered less likely to eat the truffles than pigs), and of course, rare white truffles taste mighty fine too. Put all three together and watch the magic happen.

The fact that we needed to primarily shoot the series during the month of November made it natural to devote an entire episode to Piedmont and capture a truffle hunt with the Romagnolos, whom I hadn’t seen in ten years. What transpired is one of my favorite segments of the entire series and made me quite confident that Natale Romagnolo missed his calling as an actor or television host. {See the video of this segment}

While I revisited old friends in every episode, our time in Puglia has a special place in my heart. I was thrilled to film segments with Antonello Losito and Ylenia Sambati. They are part of new generation of proud Pugliese who are bringing innovative travel entrepreneurship and attention to this lesser-known region of Puglia. And what fun we had…Antonello walked with me through his hometown of Monopoli and introduced me to charming retired fisherman who now crafts model boats. With Ylenia, I learned to make orecchiette with Mama Giulia, another friend I met on a previous trip to the region.

Filming Dream of Italy also gave me the opportunity to fulfill a few of my own longtime Italian dreams. I keep a mental bucket list of travel experiences and one that had yet to be crossed of was to “ride” with the Tuscan cowboys of the Maremma. I fell in love with this wild and wonderful part of Tuscany when I visited Terme di Saturnia (a luxury resort built around ancient hot spring) which I wrote about in the very first issue of Dream of Italy in 2002.

When our production team was brainstorming ideas for potential segments, meeting the butteri (cowboys) was my very first suggestion. Our associate producer worked diligently to secure permission from local authorities to film at this exquisite seaside regional park where a small team of cowboys raise cattle and horses.  The experience itself didn’t disappoint.

The cowboys, wearing long coats like Marlboro men, looked like they came straight out of central casting during a bygone era. The head buttero traded in his horse for a jeep and our crew piled in to try to keep up with the other cowboys on horseback and the animals. Our shoot ended with the cowboys riding into the ocean on their horses. {See the video of this segment}

Back in the edit room, our editor selected a piece of music that sounds like it came straight out of an old western movie. I’ve watched the cowboy segment dozens of times but tear up every time I hear that score and watch those old-time cowboys, beautiful animals and drop dead gorgeous scenery. It was the perfect segment to end our Tuscany episode.

Looking to the Past

We featured many artisans in the series – from the model boat builder in Puglia to a stained glass artist in Umbria. Each of course had a very personal story to tell, inevitably one of passion and devotion. Their stories were made all the more moving as many of their art forms are considered to be dying.

But perhaps this isn’t true and no one made me question this thought more than the eighth generation owner of Busatti textiles in Anghiari. Giovanni Sassolini Busatti’s family has been making fine cotton and linen fabrics in the basement of a 16th-century Tuscan palazzo since 1842.

In his interview he expressed that the way that his products are created – a rare find in the modern world – is precisely what keeps customers coming back from more. “Most of the production requested is the old one: high quality, shuttle looms, very slow production, very slow but well finished,” he told us.

When he needs inspiration for business or for life, Busatti looks to the past.  “When I need to do something very very new, I go in Florence and I go inside Santa Maria Novella. I recover something that is inside me,” he shared.

“The future is in the past,” Busatti said.

Filming this series convinced me Busatti’s words have never been more true. Sure, there is room for innovation and new ideas but the key to Italy’s promising future remains in its rich, rich past. Hopefully we did justice to those snippets of age-old traditions we featured in Dream of Italy.