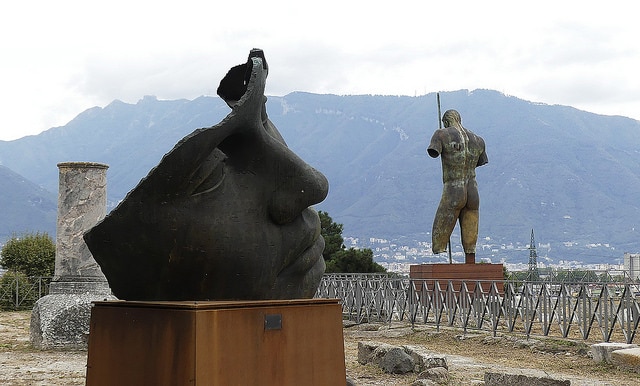 Pompeii is hosting a temporary exhibition of 30 massive bronze, plaster, and marble sculptures of mythological creatures through May 1, 2017. The sculptures, imposing classical-style figures that fit right in among the ancient ruins, are the works of Polish artist Igor Mitoraj, whose last wish before his death in 2014 was to have his work displayed at Pompeii. Like ancient classical sculptures that have eroded with time, Mitoraj’s sculptures have cracks and missing limbs, a comment on the relationship between classical and contemporary art.

In the exhibit, “Mythological gods and heroes populate the streets and the squares of the city buried by Vesuvius, emerging like dreams from the ruins,” said Pompeii Superintendent Massimo Osanna. “Mute and iconic symbols, the works of Mitoraj remind us, in their immanence, of the deep value of classicism in contemporary culture.”

The exhibit opened in May 2016, though Mitoraj had selected the locations for the sculptures before his death. The carefully chosen locations include notable Pompeii landmarks such as the Temple of Venus, the Basilica, the Gladiators’ Barracks, the Via dell’Abbondanza and the Triangular Forum.

Mitoraj was born in 1944 in Germany and studied art in Krakow and Paris before settling down in Pietrasanta. Besides bronze, he also worked with terracotta and marble, inspired by a trip to Carrara, Italy, in 1979; his other works include the bronze doors to the Basilica di Santa Maria degli Angeli in Rome.

Professor Emmanuele F. M. Emanuele, chair of Fondazione Terzo Pilastro, called the exhibit “an homage to [Mitoraj’s] important career and to his life that the beloved and internationally renowned French-Polish artist, chose to live right here in Italy.”

The exhibit was directed and curated by Luca Pizzi of the Atelier Mitoraj Foundation in Pietrasanta,  a town in northwestern Italy where Mitoraj had lived, and by the superintendency of Pompeii and the Contini Art Gallery. — Elaine Murphy

Find out what is newly renovated in Pompeii