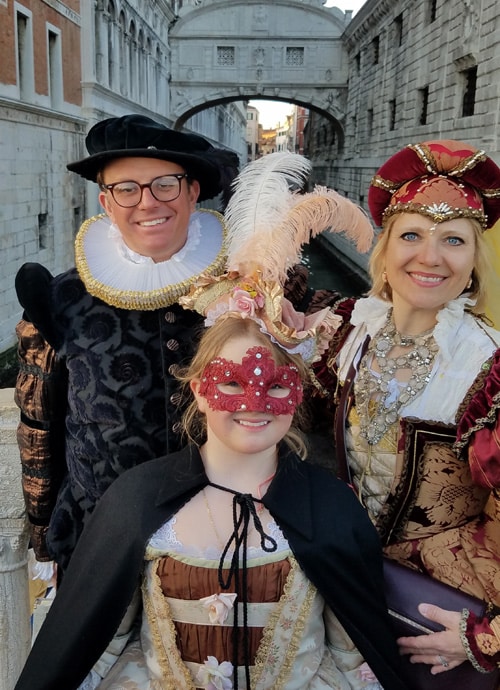 Our capes cast a shadow on the cobblestone streets as the sun set behind on us the Grand Canal in Venice. I felt for a moment as if I’d stepped back in time (like in Starz’ fabulous Outlander historical time travel series). Was it 2017 or two hundred years earlier as I looked at my daughter in a laced hoop dress with feathered hat?

Carnevale has been celebrated for nearly a millennium in Venice (in 1094 Carnevale was already mentioned in a charter of the Doge Faliero) and this year we decided we would be part of this historical celebration leading up to Lent.

This year Carnevale began on February 11 and will end on February 28 with a grand finale, the “Svolo del Leon” in Venice’s main square (and center of many of the Carnevale festivities) the Piazza San Marco where a lion painted on a large canvas will fly up to the bell tower over the audience. Around three million people will participate in Carnevale festivities. Our group of ten (from the youngest at 9 to the oldest at 76) was part of the celebrations Friday evening and all day Saturday. 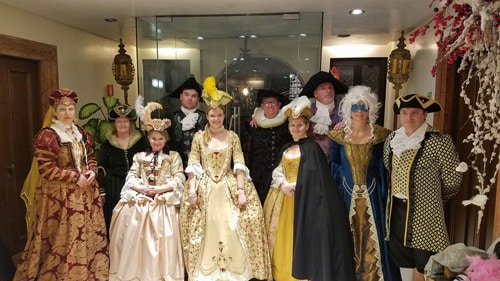 We began our adventure at the Atelier Nicolao a professional tailor shop (one of many often affiliated with hotels) which makes, rents and sells period costumes for theaters, opera houses, films (including dressing Cate Blanchett for Elizabeth I) and of course Carnevale. They dressed us all including our nine-year old daughter in 16th- and 18th-century attire. This was a costlier option than buying a costume and mask from a street vendor but well worth it. Even my daughter, whom I was worried could not carry such a heavy costume, loved parading around Venice in her true princess dress.

Indeed parading around Venice in costume is one of the highlights of Carnevale. We began Friday evening walking across the Grand Canal on Venice’s oldest bridge, the Rialto, and having dinner in costume at La Patatina. The owner of our wonderful hotel, Ca’Nigra Lagoon Resort, who was dressed as bejeweled Josephine with her Napoleon in tow, gave us the tips on how to enjoy Venice (always ask a local!).

Most hotels in fact will host or help you find local parties as the more commercialized ones at the grand palazzo can get quite expensive. We signed up to receive notice of the ‘secret location’ for the t.ART (are) revel but since we were with our young daughter and our group of 10 wanted to stay together we bypassed the adult only events to enjoy soaking up the history of the city in our period pieces.

Instead on Saturday, we ate a costumed brunch hosted by our hotel and then headed to Piazza San Marco. There the masses converged around the main stage of performers, spectacles and contests. Locals and tourists of all ages strutted and threw confetti as the mosaics of Basilica San Marco glistened.  There was a resurrected gold-laced Louis the XIV and gilded ladies form Marie Antoinette’s court; there was a handcrafted mouse queen, a six-foot tree fairy and a dragon that ran after passersby. It was a child’s delight to see all the colors and forms. Wide-eyed children in costume roamed with their parents, the youngest in adorned prams. 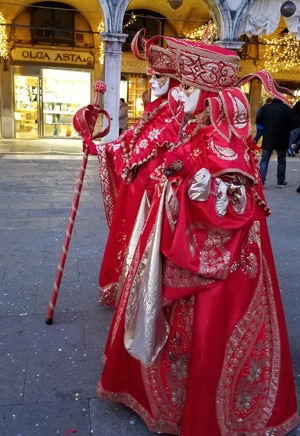 After a couple of hours, we headed to the children’s street fair on the way to Arsenale (the after hours place for Carnevale debauchery). Along the Grand Canal, festival organizers had set up bumper cars, swings and games for children to enjoy. The crowds here were thinner (at least in the daytime) and we took a break while our daughter tossed a ball to catch a fish (though how we would have gotten that through U.S. Customs if she had won is another story!). We had no time to go ice skating in Campo San Polo or Piazza Ferretto or check out the children’s activities at the Peggy Guggenheim Museum, but these were among the many family friendly events happening all around the city.

Later in the afternoon we headed back for more eye candy and confetti in Piazza San Marco. Staying in costume we had dinner at Ristorante Casa Bonita before heading back to our hotel at 11 p.m. Though there were still many children out walking, the vibe had definitely changed and it was time for late night revelers to take over Carnevale and for us to take off our laces and pack up our wonderful memories.

Tatiana Serafin is an award-winning journalist (2014 Front Page Award) and adjunct professor at Marymount Manhattan College. She is currently working on two book-length projects, as well translations of Ukrainian poetry. You can find her on Twitter @TatianaSerafin.