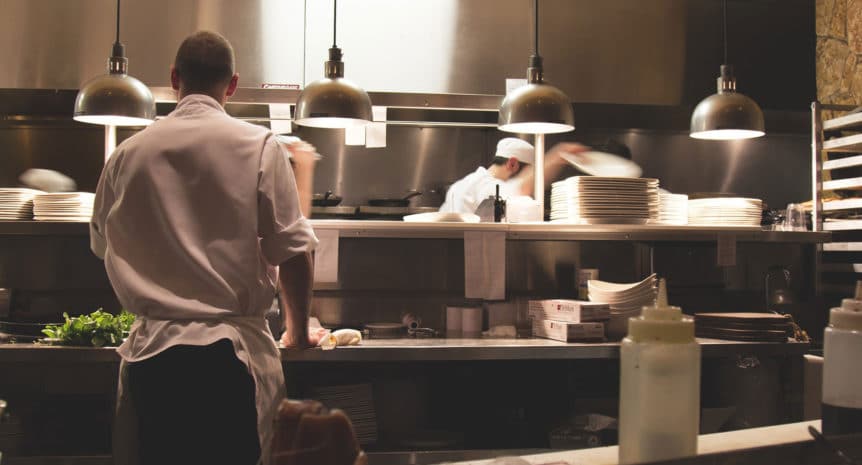 If someone told you that they were going InGalera in Milan, you normally would not sigh jealously and ask them what sort of three-course meal they were going to try out this time. The term, Italian slang for being in prison, is the name for a recently en vogue restaurant – located in a Milanese penitentiary.

The restaurant has only two staffers who are not serving a prison sentence – the maître d’ and head chef Ivan Manzo – the rest of InGalera’s employees are serving time in the on-site medium-security Bollate Prison for crimes ranging from homicide to armed robbery.

Upon arrival, you are escorted through a wing of the prison to the restaurant, which is decorated with a cheeky nod to its location – movie posters of famous prison films line the walls: Shawshank Redemption and Escape From Alcatraz notable among them. But otherwise, the airy pastel furnishings and bright modern lines would have you think that you were dining in a swanky spot downtown instead of in a medium-security prison.

While diners come mainly for the unique experience, deliciously reviewed food and our of pure curiosity, what they are providing for these inmates is the chance to be a part of an experiment that the founders hope will change how the public views prisons and how inmates can grow to be contributing members of society.

Heralded by the Milanese elite, food critics and family diners alike, the restaurant is a response to Italy’s recently recognized imprisonment problem. Much like the United States, Italy enacted harsh laws for minor drug offenses in the 1990s – the resulting overcrowding became such a problem that the European Court of Human Rights ordered Italy to start measures to fix the system in 2013.

One of the biggest questions that lawmakers had about the inmates was how to foster rehabilitation efforts while in prison and lower recidivism rates when they were finished serving their time. The director of Bollate prison, Massimo Parisi, was already spearheading experimentations with these sorts of questions in mind.

His penitentiary offers an array of programs for its inmates: teaching art and drama classes, learning carpentry skills, tending to the stable of horses onsite, even leaving the premises, unsupervised, to work for an outside firm. So when Silvia Polleri, the restaurant’s manager and visionary, introduced the idea, the prison gladly took on the experiment.

Polleri had worked with the prison before – she began her career as a kindergarten teacher for 22 years before switching to catering and, in 2004, starting a co-op with the idea of helping the inmates at Bollate rehabilitate by giving them real jobs at her catering business while still in prison to prepare them for life after release.

But the idea of starting a restaurant inside of a prison opened up a new kind of question. For starters, who would come?

Reservations are necessary and are filling up quickly! Call (39) 334 3081189 to make a booking in advance. Meals range in price from 10 to 20€. InGalera has a seasonal menu and wine list that rotates every three months. Buon appetito!