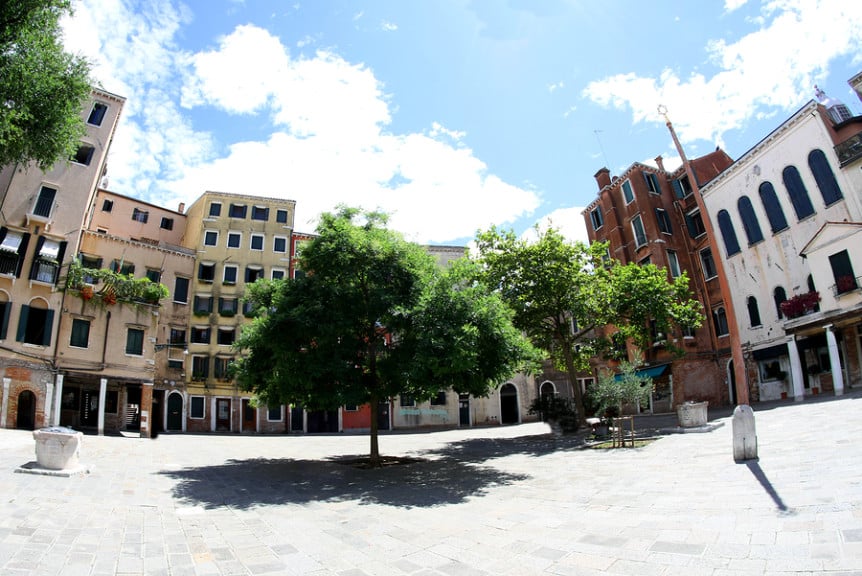 For the 500th anniversary of the Jewish ghetto, Venice’s shrinking Jewish population hopes to reconnect with and celebrate its history while revitalizing the community and its neglected buildings by hosting a year-long celebration of Jewish culture called Venice Ghetto 500. The celebrations in Venice even include a Shakespeare performance starring U.S. Supreme Court Justice Ruth Bader Ginsburg.

In 1516, the Republic of Venice relocated its Jews to a small island that had a former foundry on it (the word for “foundry” was getto in the Venetian dialect). As the ghetto built up, it became overcrowded, polluted, and impoverished, like many other Jewish ghettos in Europe.

The opening ceremony of the Venice Ghetto 500 on March 29, 2016, 500 years to the day after Venice’s Jews were segregated, will include an orchestra performance at Teatro La Fenice and a keynote speech by British historian Simon Schama. The orchestra will play Israeli Jewish-turned-Catholic composer Gustav Mahler’s “Symphony No. 1 in D major,” a piece that addresses European Jews’ lack of belonging in their home countries.

The opening ceremony will usher in a year of revitalization efforts, building restorations, and art and cultural events, such as a prominent exhibit on Jewish history and life at the Doge’s Palace that will run from June to November. The exhibit will feature several centuries’ worth of documents and other materials to capture the Jewish ghetto in Europe as a place of segregation and cultural exchange between the Roman, German  and Spanish Jews who lived in Venice’s ghetto.

A production of Shakespeare’s The Merchant of Venice, guest starring U.S. Supreme Court Justice Ruth Bader Ginsburg, will take place on the island on July 27, 2016.  (Incidentally, 2016 marks the 400th anniversary of the death of Shakespeare.) The main characters of the play will be at the center of a mock trial presided by Judge Ginsburg. Shylock, Antonio, Portia will be represented by famous international lawyers.

The Jewish community also hopes to restore its Jewish museum, which has been planned since 2014; however, despite a donation from fashion designer Diane von Furstenberg, the project is not yet fully funded.

As the population of Venice’s historic center has declined in recent years – 108,000 in 1971 vs. 58,000 today – so has the population of the Jewish ghetto declined over the centuries, from 5,000 in the 1600s to just 500 today. As a result, the Jewish community has difficulty providing civic services to locals, such as staffing its library, and plans to focus on renewing local partnerships during the anniversary year, e.g., establishing residency programs at the library.

Venice Ghetto 500 organizer Barbara del Mercato envisions the anniversary as bringing more positive tourism to La Serenissima, which is overrun with tourists in all seasons. “The ghetto could become a sort of positive example of how tourism could be an opportunity and not something we have to suffer passively,” she told Israeli news source Haaretz.

Along the same lines, Shaul Bassi, the director of the Venice Center for International Jewish Studies, said, “We definitely need less tourists who come for a few hours, and more people interested in [long-term] experiential and educational tourism.” — Elaine Murphy