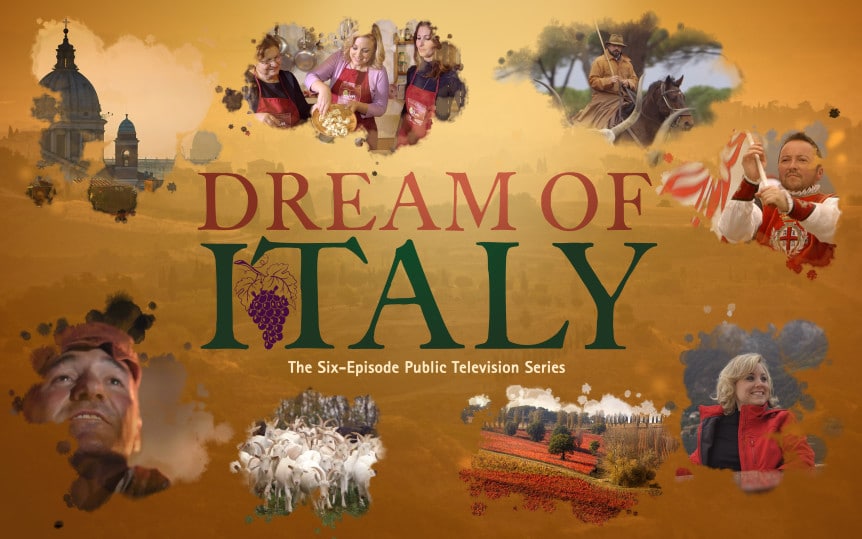 The new six-part television series Dream of Italy, presented by WTTW Chicago and distributed nationwide by American Public Television, is a journey into the heart and soul of the most beautiful country in the world. With an insider’s perspective on the people and culture that make Italy so special, this in-depth series will take viewers to places they have never seen before.  Dream of Italy will be available to public television stations nationwide beginning on May 16, 2015  and continue to air for two years. (See schedule for local stations.)

The premiere season will visit six special regions in Italy – Naples/Amalfi, Puglia, Rome, Umbria, Tuscany, and Piedmont. In each region, the show will dive into what makes them unique, through stories of the food, wine, arts and history of the region.

With its mesmerizing landscapes, rich artistic treasures, deep ties to the past and warm people, it is no wonder that Americans dream of Italy more than any other destination in the world. Join Italian travel expert Kathy McCabe, editor of the award-winning travel newsletter Dream of Italy, as she explores six diverse areas of Italy, and meets Italy’s colorful locals — chefs, artisans, historians — who are deeply connected to their land, carrying on and preserving the traditions of their ancestors. Dream of Italy is directed by Dakkan Abbe, who created the public television series Inside the Tuscan Hills.

Dream of Italy is made possible by Viator, AMA Waterways, and Perillo Tours.

Episode descriptions for the premiere season:

We start in the heart of Tuscany – Chianti – with a visit to Castello di Ama to learn how true Chianti wine is made and see the modern art that makes up the estate. The area is also famous for olive oil and we experience the olive harvest at Pornanino. Nearby, Kathy meets the very special cashmere goats that Nora Kravis raises at Chianti Cashmere Farm. At Busatti in Anghiari, we watch 100-year-old looms craft fine fabrics. Then it is off to Panzano for a wild boar hunt with the La Squadra Chiantigiana and a visit with philosophical butcher Dario Cecchini. The episode ends on the captivating coast of Tuscany in Maremma with a stunning ride with the butteri (cowboys).

Romans have been making mosaics for thousands of years and artisan Nadia Ridolfini teaches Kathy the ancient craft. Food markets like the Campo dei Fiori are a vital part of daily life. Alessandro Volpetti takes Kathy on a tour of the new Testaccio market as well as his family deli Volpetti. Then the di Felice brothers, owners of Da Enzo, teach Kathy to make Rome’s famous dish Cacio e Pepe. Then we get “the scoop” on gelato making with Gelateria del Teatro ai Coronari. Noted street artist Alice Pasquini shows us her work, a modern contrast to ancient frescoes. The episode ends at Palazzo Brancaccio with an historic ball performed by Campagna Nazionale di Danza Storica.

Umbria has long loomed in the shadow of neighboring Tuscany but visits to Assisi and Perugia introduce the viewers to the rich treasures of this region. In Perugia, we meet two women carrying on their family traditions – Maddalena Forenza creating stained glass and Marta Cucchia and her handmade textiles. Just outside Perugia, at the Perugina Chocolate School, chocolate maestro Massimiliano Guidubaldi teaches Kathy to make the famous Baci candy. Then it is into the countryside around Montefalco to visit the ultra-modern winery Tenuta Castelbuono and learn about the local Sagrantino grape with Marco Caprai at the Arnaldo Caprai vineyard. Kathy enjoys a cooking lesson with Chef Salvatore Denaro. We are then off to a goat cheese farm to meet Diego Calcabrina and his goats and then it is time to harvest precious saffron and forage for greens with Marta Giampiccolo.

Neapolitans are serious about their coffee and we visit the historic Gran Caffe Gambrinus to taste what some say is the best espresso in the city. Naples is also famous for its tailoring tradition and we visit Rubinacci for an inside look. Kathy attends pizza school with Master Enzo Coccia and learns it isn’t easy to make a perfect pizza. A visit to Via San Gregorio Armeno reveals a street full of Christmas creches and caricatures. Mount Vesuvius looms large over life here and we venture into the crater with guide Roberto Addeo. In the shadow of Vesuvius we enjoy a local folk music performance before venturing to the Amalfi Coast. We visit some very special vines at Tenuta San Francesco, learn how to make paper at Amatruda in the town of Amalfi, learn to make limoncello with a local, watch a cooking demonstration with Chef Christoph Bob at Monastero Santa Rosa and go fishing with local Costabile Laudano.

Piedmont is the land of truffles and wine. Kathy tries to get truffle hunters Natale and Giorgio Romagnolo to reveal their secret hunting grounds, then tastes the precious white truffles they find. Then it is time to attend the World Truffle Auction where the bidding gets frenzied for these rare tubers. We visit Cascina Bruciata vineyard to learn about the hearty Barolo, Barbaresco and Barbera wines that are produced in Piedmont. Piedmont is also home to hot springs and Kathy goes to Lago delle Sorgenti to find out about the unique medicinal qualities of these baths. We also visit Lake Iseo in the region of Lombardy to see fine Italian boat making – from masters big and small – at Riva yachts and a small fishing boat maker on Monte Isola.

Local Tonino Benincasa gives Kathy an introduction to the Baroque city of Lecce with a classic car ride. Lecce is famous for its paper maché and we see how nativity scene figures are crafted at Cartapesta Claudio Riso. Outside Lecce, in the town of Squinzano, Kathy meets the locals and gets a ride in a tiny Ape car to an olive mill where locals are dancing the pizzica in celebration of the harvest. A local mama teaches Kathy to make orecchiette (pasta). Alberobello is famous for its classic cone-shaped houses (trulli) and we learn the history of them. In seaside Monopoli, Kathy’s friend Antonello Losito introduces her to an old man who makes beautiful model boats.

For almost 60 years, WTTW Chicago and WTTW National Productions have introduced a wide array of ground-breaking television programming – reflecting the world’s rich and diverse arts and entertainment scene as well as education, politics, public affairs, business, and religion – to a national audience. Its landmark innovative series and original productions include the music series, Soundstage®, which features today’s top pop and rock artists in an intimate concert setting. The popular cooking series, MEXICO — One Plate at a Time with Rick Bayless, is in its tenth season.   Other original productions include performance showcases David Broza at Masada: The Sunrise Concert; Legends of Jazz with Ramsey Lewis; cultural/travel series Grannies on Safari and Family Travel with Colleen Kelly; the first travel series on bicycling, Pedal America; business series CEO Exchange; the documentary series Retirement Revolution; the weekly movie review series, Ebert Presents At the Movies; the transmedia online educational children’s properties Mission to Planet 429 and UMIGO, and the award-winning children’s series, WordWorld.  For more information, please visit www.wttw.com/national.