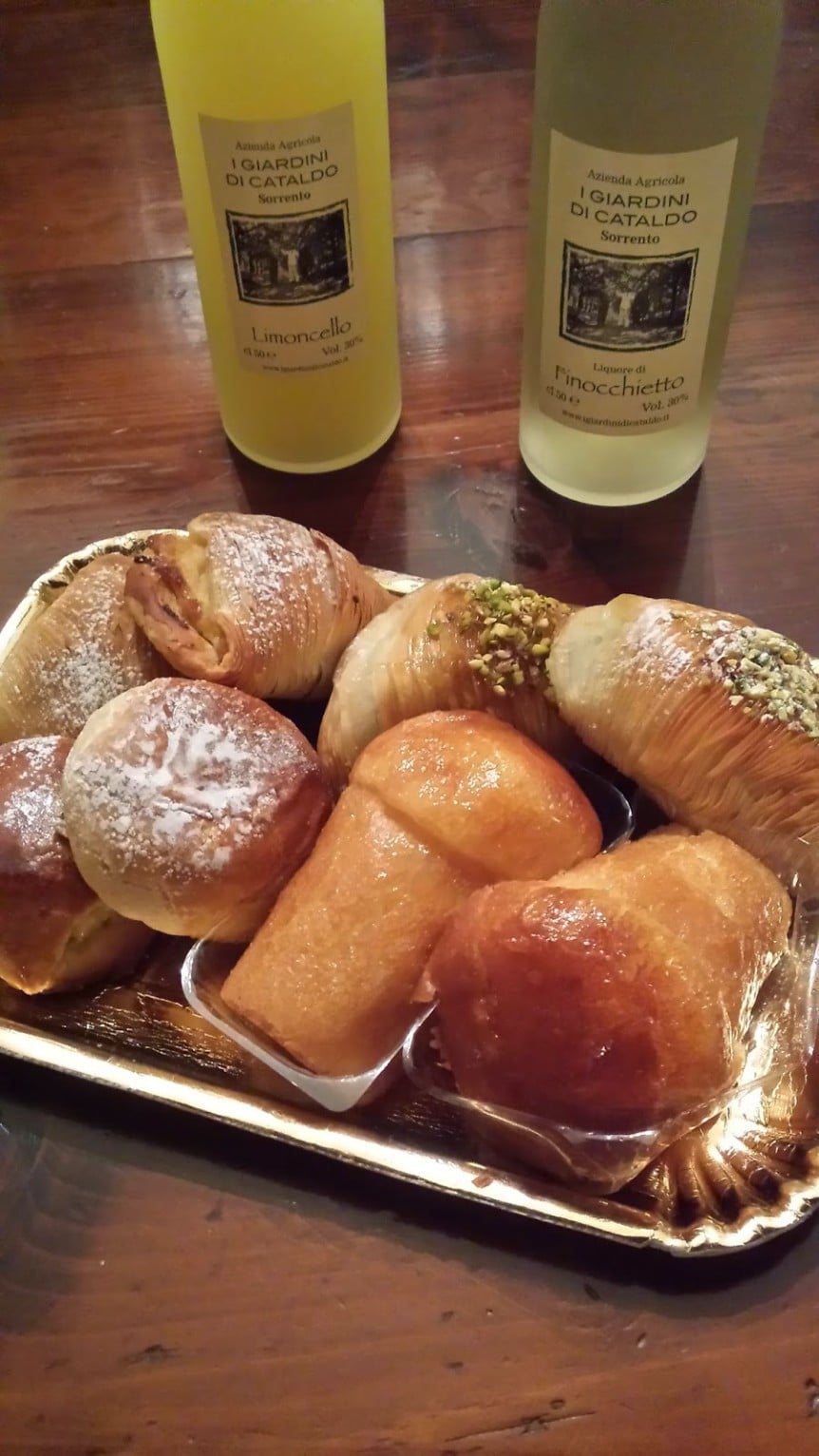 Whenever I travel to Naples and the Amalfi Coast, I always have to take into account a bit of extra baggage on the return trip. I’m not, sadly, talking about the extra baggage you get to check, but the extra baggage that takes a bit longer to unpack and makes your jeans just that much tighter around the middle.

Umbria, my home for the past 20 years, is a land of simple yet excellent food. Pork charcuterie, sheep cheese, heirloom legumes, forest treasures like mushrooms, truffles, and wild asparagus are all daily treats on the Umbrian table, and it’s easy to become inured to the quality and flavor of these local dishes.
The one category where Umbria falls short is dessert, unfortunately. A landlocked region, Umbria hasn’t had centuries (if not millennia) of contact with foreign trading ships stocked with exotic spices, sugar and cocoa. A mountainous region, Umbria doesn’t have the climate for citrus, dates, almonds and other base ingredients of many of the Mediterranean basin’s best delicacies. A poor, rustic region until recently, Umbria traditionally cooks with olive oil and water, not butter and milk.
All this adds up to a meagerly sum in the dessert column. Hard tozzetti cookies dunked in wine, dry crostate tarts baked with olive oil, a rather sad version of strudel…nothing that leads you skipping down the path of perdition, in other words.

But Naples! Ah, Naples…Naples is a siren of sweets, tempting you with a thousand years of delicacies that Umbria has been denied. One of the most important ports in the Mediterranean since Roman times, Naples has been unloading ships stocked with cinnamon, nutmeg, ginger, sugar, dates, rum, and cocoa for generations of pastry chefs. The much more tropical climate means that the area is rich in lemon, orange, and almond groves, the heat makes it easier to dry and candy figs and other sweet fruit, and the herds of grazing cattle along the fertile plain give milk enough for an army hungry for sweet ricotta.

In Naples, I am happy to do my part to maintain this rich gastronomic history and tradition…all in the name of culture, of course. I make a beeline for a promising pasticceria (you can tell the good ones by the crowd of customers), order up a small (ahem, medium) tray of local delights, watch as they wrap it up in paper and ribbon like the gift it is, and guard my precious cargo until I find a quiet spot to savor my goodies while watching Naples frantically get on with being Naples.

Here are a few of the most classic Neapolitan pastries you should try on your next trip, but make sure you’ve packed a pair of roomy pants:
Sfogliatelle: Though her crown is often challenged by babà au rhum (see below), for me the divine sfogliatella will always reign supreme. There are two versions of the sfogliatella: riccia, or ruffled, and frolla, or shortcrust.
My favorite is the riccia, which is also the more elegant and classic version. Here, a sweet orange-infused ricotta filling is enclosed in a delicate pastry made of countless parchment-thin layers, which separate out into ruffles or leaves (from which the name sfogliatella is derived) as they bake, crispen, and form a golden, shell shaped pastry. They can be bite-sized (my favorite, with the perfect pastry to filling ratio), or as large as a lobster tail (overwhelming, even for a die-hard sweet tooth).
In a pinch, I have been known to enjoy the frolla version, generally preferred by Neapolitans (probably because it had also been made at home). Here the same ricotta filling is enclosed in a shortcrust, which forms a small ball, and baked; these can also be various sizes, but are most commonly a bit smaller than a tennis ball.
Neither of these are first-date foods — at the first bite, both shatter in a shower of pastry flakes or short crumbs covering your cleavage and lap, and are almost impossible to eat with cutlery — but a bit of unseemly collateral damage is a small price to pay for the pure pleasure of this local specialty, invented on the Amalfi Coast and wholeheartedly adopted by Naples in the early 19th century.
Babà au rhum: Just as there are cat people and dog people, so are there sfogliatelle people and babà people, and it’s not easy to broker a peace between them. Babà is an airy sponge cake (most commonly baked in individual portions, so shaped like tall muffins) made with eggs, milk, and butter and, once cooked, soaked in a sweet rum syrup. It made its way through Europe from Poland to France in the 1800s and finally to Naples, where it was adopted with much relish and is now one of the most beloved of “local” pastries, and the source of much strife in sfogliatelle vs. babà debates around dinner tables throughout the city.
Zeppole: If you happen to be in or near Naples around the feast day of Saint Joseph (La Festa di San Giuseppe) on March 19, you’ll be able to feast on “le zeppole di San Giuseppe.” These are deep-fried fritters, dusted with sugar and filled and topped with piped custard and a candied cherry. They are roughly a gazillion calories each, so eat one and then go light a candle and pray to Saint Joseph to help you burn it off.
Pastiera: At Eastertime, Neapolitans make pastiera to serve at the holiday meal with family. This is a deeply traditional tart (indeed, said to have pagan roots) with a shortbread bottom crust, a rich filling of ricotta, eggs, boiled wheat kernels, candied citrus, orange water, and spices, and a latticed shortbread top crust. It includes symbolic ingredients representing rebirth and fertility, which happily are also delicious baked together, and is prepared no later than Good Friday to be eaten on Easter Sunday. Once made almost exclusively by the nuns in local convents for the city’s wealthy families, now it is often homemade or bought the few days before Easter at Neapolitan pastry shops.
Any of these delicacies can be found in the city of Naples, Sorrento or further south along the Amalfi Coast. Unless you have a heroic sugar tolerance, you’ll probably have to pace yourself over a couple of days: these are not light desserts. Plan at least an overnight, staying at one of the area hotels listed on ItalyTraveller.com and walking off your daily indulgence exploring this beautiful area of southern Italy.
— Rebecca Winke