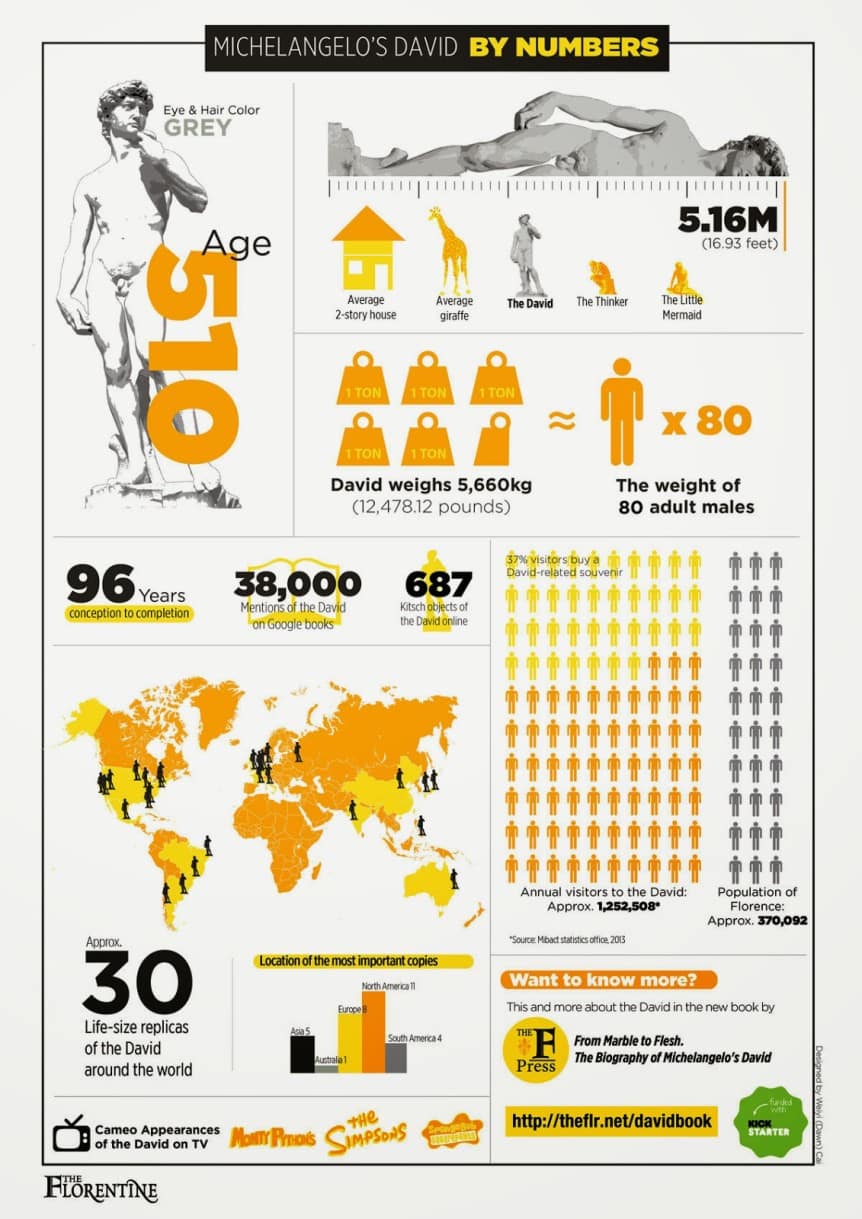 This is a guest post by our friend, art historian Alexandra Korey. Updated 2018.

If you love Italy, chances are you’ve been to Florence, and you’ve likely stood in line for your chance to gaze up on the world’s most famous sculpture, Michelangelo’s David. Why did you wait to see him? What was your reaction? This almost inexplicable attraction is something that author Victor Coonin seeks to explain in his new book about the statue called From Marble to Flesh. The Biography of Michelangelo’s David.

An art historian myself, I thought I knew quite a bit about Michelangelo, but I actually learned a lot about the David from this very readable book that covers the whole story of the statue, from when the block of marble was quarried at Fantiscritti well before Michelangelo was even born, to the 19th century celebrations and to 21st century artists’ interpretations of it.

Here are a few fun facts I picked up while reading the book:

1. He’s 16.96 feet tall, or 517cm. When Stanford researchers did a 3D scan of the sculpture in 1999, they created scaffolding and machinery based on the height of the statue given in an important five-volume study of the David by Charles De Tolnay, which was listed as 434cm, a number echoed in all other books after him. On-site, they found it to be almost 3 feet taller! Oops.

2.  Scholars have estimated that the David weighs 5,660 kilograms, though this is just an estimate as nobody has ever tried to place him on a scale. This number may thus be underestimated by up to 2 tons. Consider that this is the weight of the finished sculpture, but first the uncarved block had to be transported, before the era of modern machinery, by oxen and on a barge, from Carrara to Florence! A weighty job.

3. In various moments in history, the original David in Piazza della Signoria had his genitals covered. A copy of the David sent to the newly created Victoria and Albert Museum in 1857 had a fig leaf shaped for it upon royal visits from Queen Victoria. The original statue in the piazza and later in the Accademia Gallery also sported a fig leaf at one point, though originally records show that he was given a larger metal “garland” to wear around his waist.

4.  There are numerous life-sized copies of the David – enough to merit its own Wikipedia page. About 30 are known. And this isn’t counting the smaller but important replicas – one house in Los Angeles had 19 small-scale (approximately 4 feet tall, perhaps) Davids lined up on the circular driveway from 1996 to 2012 (when new owners of the home apparently had diverging taste).

5. About 1.25 million people visit the Accademia – mostly for the David – each year. That’s about 3.3 times the population of Florence.

These are just tidbits – if you are curious about art, or simply want to know more about a work of art that has become a symbol of the whole of Italy, pick up a copy of the book From Marble to Flesh in digital or paperback on amazon.com.