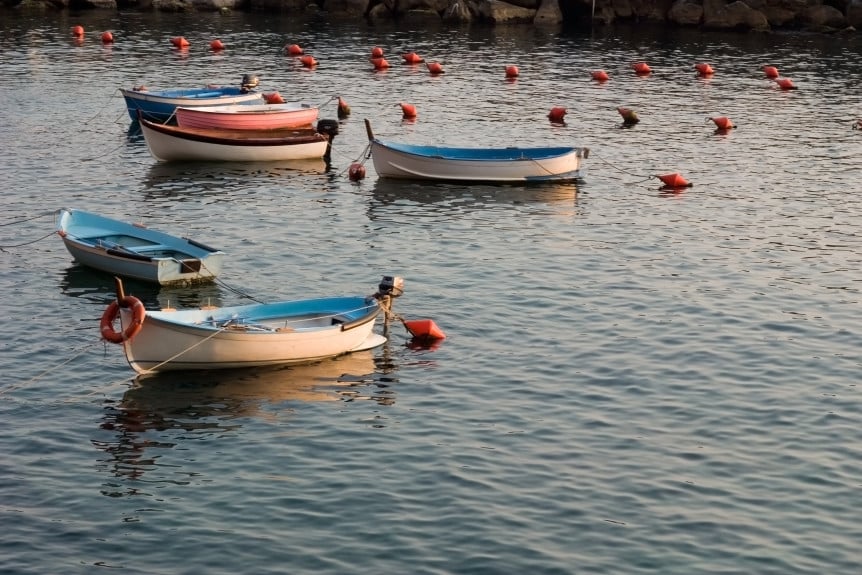 This article originally appeared in the May 2014 issue of Dream of Italy. Updated 2018.

In the Cinque Terre, one can enjoy basking in the sun with a soft breeze off the sea, trekking the endless trails with their panoramic vistas, exploring the picturesque fishing villages, or just soaking in some local atmosphere in colorful villages that dot this somewhat savage but ever so gorgeous landscape. There are four ways that you can reach and move between the Cinque Terre towns:

Since the villages are built into narrow valleys (or a hilltop in Corniglia‘s case) and have little possibility for parking, driving to the Cinque Terre is discouraged. If you must bring a car to the Cinque Terre, we suggest leaving it in La Spezia (1.20€ per hour from 8 a.m. to 8 p.m. and .50€ an hour from 8 p.m. to 8 a.m.) for the entirety of your stay.

By far, the train is the easiest method of reaching the Cinque Terre and of traveling between the villages. Between 6 a.m. and 11:30 p.m., trains run at least hourly back and forth along the coastline. The maximum riding time between one town and the next is roughly five minutes (with only one minute between Riomaggiore and Manarola) so you can easily hop between all of them in one day.

The Cinque Terre National Park offers the Cinque Terre Multiservice Card, which costs 12€ and covers the four trails maintained by the National Park and all public transport within the park (the bus service in four villages and the regional trains between La Spezia and Levanto). This card definitely eliminates any hassle in dealing with train tickets but probably won’t save you much money unless you take advantage of all of the services included (from this year, WiFi and toilets are part of the deal, too!)

The Liguria regional train tickets are sold on a kilometric system (minimum five kilometers for 1.80€) so you pay according to the length of your journey. You can buy these tickets ahead of time and validate them before use. The only problem with these tickets is that once stamped, each of the tickets 30 kilometers and under are only valid for 75 minutes. Therefore each leg of your journey would necessitate a new ticket.

One way around this, if you start in Monterosso or Riomaggiore, would be to buy one 40 kilometer ticket (4€) at the start of your day. Once validated, this ticket gives you six hours to hop on and off trains in one direction. Once you’re done, you can take the train or the ferry back to your starting point.

The trains can be very crowded during the peak times of the year so sometimes it can be difficult to board or get off the train. There is always a conductor on the platform watching to make sure that everyone is on before the doors shut so don’t panic if you find yourself at the end of a line. If you plan on getting off at the next stop, make sure you stand by the door for easy access when the train stops.

We suggest that you schedule out your day and buy tickets beforehand so you don’t get stuck in lines at the ticket booth that could cause you to miss your train. Both the Cinque Terre Multiservice Card and the regional kilometric tickets are only valid once time-stamped in the validation machines and are good indefinitely.

The ferry boat is an excellent way of admiring the Cinque Terre villages as well as moving between them. These high-speed passenger boats run between the Cinque Terre (except for Corniglia which has no port access) up to 20 times a day, starting at 10 a.m. and ending after 6 p.m. You can buy a ticket (4 to 9€) or there are hop on/hop off passes available. They connect the Cinque Terre to Levanto as well as Portovenere and, during peak months, Portofino. Visit www.navigazionegolfodeipoeti.it and www.traghettiportofino.it for more information.

An alternative to the ferry boat is to hire a private boat with captain. Matilde Navigazione out of Monterosso (39-333-8212007; info@matildenavigazione.com) can take you from town to town or to a private cove for snorkeling. If you are able to navigate a boat on your own Sebastiano and Rosy rent out dinghies in Monterosso (39-329-9289899; info@ilporticciolo.eu). Make sure you ask where you can and cannot go as park regulations are strict regarding protected marine areas.

Without a doubt, the best way to experience the Cinque Terre is on foot. The network of trails which crisscross the territory present endless possibilities for exploration. Paths winding through vineyards, atop stone walls and past ancient churches provide some of the best views in all of Italy. Every step rewards you with yet another breathtaking panorama.

These trails were formed primarily for the townspeople to reach their olive groves or vineyards — people had no reason to walk from village to village. If they needed to conduct business or socialize with people from a different town, they would wait until the sea was calm enough to row a boat over (and after the late 1800s, simply take a train). Over the years, the trails met, creating the trail that we know today as the “Blue Trail.”

The most famous path of the area is the Sentiero Azzurro (the Blue Trail) which connects the five villages through a combination of stairs, uneven steps, narrow paths that hug stone walls and, in the case of the Via dell’Amore, a paved walkway suitable for baby strollers and those with mobility issues. After the Cinque Terre National Land Park was formed in 1999, the Cinque Terre Card was introduced. This card permits visitors unlimited access to the four trails that make up the Sentiero Azzurro for a 7.50€ fee per day.

As of May 2014, the only section of the Sentiero Azzurro (blue trail) open for passage is the Monterosso-Vernazza path. Even though no barriers are placed at the start of the trail in between Vernazza and Corniglia (trail closed) we highly discourage you from walking it. The risk of sudden landslides is possible.

The past few years have not been kind to the Cinque Terre. The famous Via dell’Amore, the sidewalk-like coastal path between Riomaggiore and Manarola, was closed in September 2012 because of a rockslide so strong that it broke the protective metal netting above. Landslides on the coastline between Corniglia and Manarola have forced closures along the path linking those two villages off and on for the past four years.

The torrential rainstorm which caused the devastating floods in Monterosso and Vernazza in October 2011 also wreaked havoc on the hillsides, causing hundreds of landslides above the villages. Many of these landslides have been contained but others are still potentially dangerous. Therefore, the entire trail from Riomaggiore to Vernazza is also officially closed as a precaution.

Though most guidebooks and sites promote exclusively these four trails, the Cinque Terre contains dozens of other, less crowded and equally as (if not more) beautiful, trails. The old trade trails and paths leading to the sanctuaries above each town are well marked and usually kept clean by local volunteers.

By visiting the Cinque Terre National Park offices, located in all of the Cinque Terre town train stations (also in the Levanto and La Spezia stations), you can get information regarding how to access these trails and their difficulty. Many of the trailheads from these higher trails can be reached by public buses available from the towns.

A basic trail map is free but if you would like to investigate the area more in depth, we recommend that you buy a more detailed map or a good hiking guidebook. We like the spiral-bound Cinque Terre Walking Map & Guide by Petra Holecek and The Complete Guide to the Cinque Terre with Map by Mauro Mariotti (easily found in the Cinque Terre but difficult to find elsewhere).

Note that the state of the Cinque Terre trails is constantly changing so before you start a trail, check with the Cinque Terre park offices or their site. If the Sentiero Azzurro is closed, it is not worth it to buy a Cinque Terre Card as the rest of the trails of the area are completely free.

Many people don’t realize that the hiking in the Cinque Terre can be difficult and, if you are not prepared, even dangerous. Few trails have railings and none, except for the Via dell’Amore, are paved. There is no access to water along the trails and shady spots are few and far between.

Be sure you wear comfortable shoes with good soles, have plenty of water and a hat and sunscreen. Do not start the trails late as there is no lighting and no emergency contact system along the way. If you have children, make sure that they are capable of walking for long distances on uneven terrain.