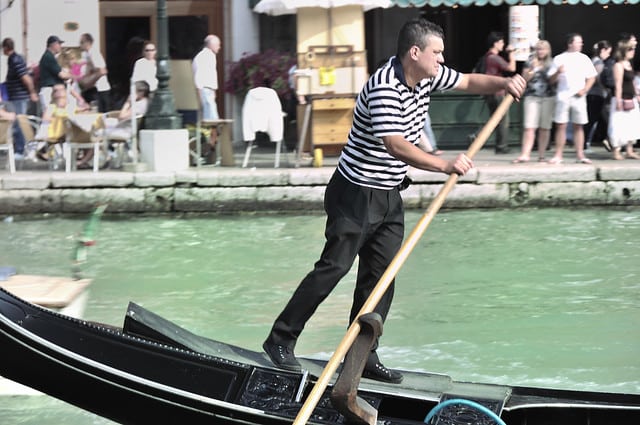 This article originally appeared in the April 2014 issue of Dream of Italy. Updated 2019.

Make sure to join the Dream of Italy Book Club on Facebook on August 14th with Laura Morelli, author of The Gondola Maker.

In the heyday of the Venetian Republic, some 10,000 gondolas transported dignitaries, merchants, and goods through the crowded canals and lagoons of the water-logged city. Today, only about 400 gondole glide through the waterways of Venice, and each year, fewer are turned out by hand. A small group of specialized master boat builders working in historic boatyards now holds the craft — literally — in its hands.

Historically, the Venetian gondola boatyard, or squero, was a family enterprise. Fathers passed on techniques to their sons, who in turn, passed them on to their own sons and grandsons. Each workshop carefully guarded its own secrets for varnish recipes, types of wood used for the decks, and tools used in specific parts of the production.

Gondola makers, squerarióli, formed a tight-knit social group. The boat-making guilds abided by a set of strict codes that governed integral aspects of its members’ lives, everything from regulating their apprentices and salaries to dowering their daughters, ministering to their sick, providing for their retired, and burying their dead. Above all, it was expected that a son would follow in his father’s footsteps, and pass the torch of the gondola-building tradition to the next generation.

Across the city a cadre of specialized artisans — ironsmiths, upholsterers, and makers of everything from oarlocks to hats — supplied their gondola-making colleagues with elaborate passenger compartments (felze), engraved prow and stern forks (ferri), oarlocks (fórcole), oars, upholstery and other ornaments of steel and brass. 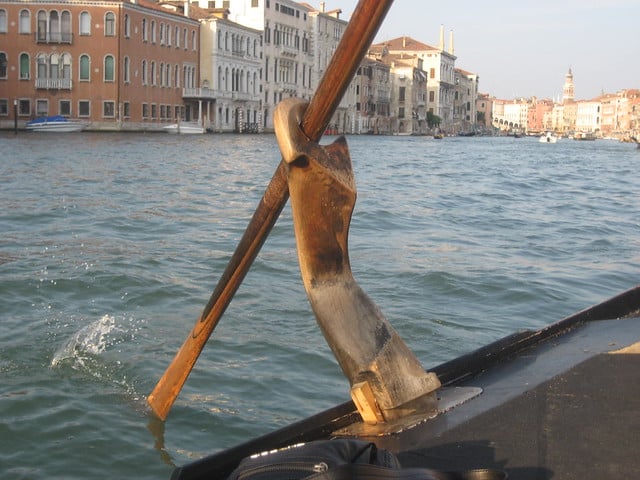 Eventually, the gondola became a status symbol much as an expensive car, with custom fittings and seasonal fabrics. Even after 1562, when authorities banned ostentatious ornamentation and decreed that all but ceremonial gondolas be painted black, some wealthy Venetians chose to pay the fines.

Today as in the past, the craft of the squerariólo begins with a wooden frame or template called a cantier, sometimes hammered into the dirt floor of the workspace generations earlier. From there, nine different kinds of wood — beech, cherry, elm, fir, larch, lime, mahogany, oak and walnut — are shaped to form the distinctive boat designed to glide through shallow water. 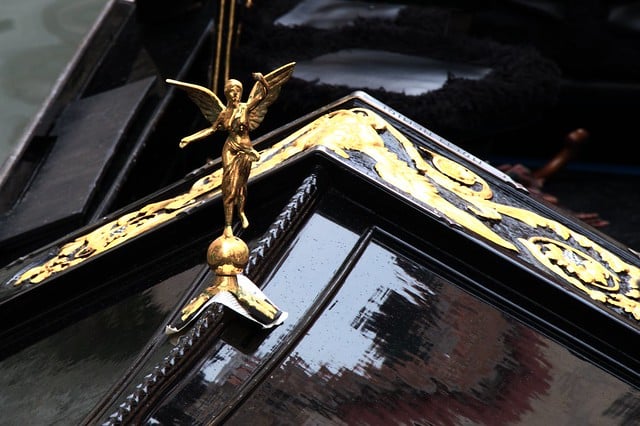 The oak is the most critical, for the planks run the entire length of the boat, about thirty feet. A gondola has no straight lines or edges, so everything must be formed with hand tools and warped with water and torches made of marsh reeds set ablaze. A special mix of varnish coats the boat and makes it watertight. After some 500 hours of labor, the boat slides down the ramp of the squero and into the canal.

Where to See Gondolas Being Made

Today’s remaining gondola makers, and artisans in related trades, cluster in the quiet section of town known as Dorsoduro, with a few more scattered across the other sestieri of Venice and its outlying islands.

Visiting these workshops is not the same as visiting a museum or even, let’s say, a mask-maker’s shop or a glass-making factory, where you are much more likely to leave with a souvenir. It is important to reserve in advance and be respectful of the artisans’ time and the important work they are doing in preserving Venice’s maritime history. 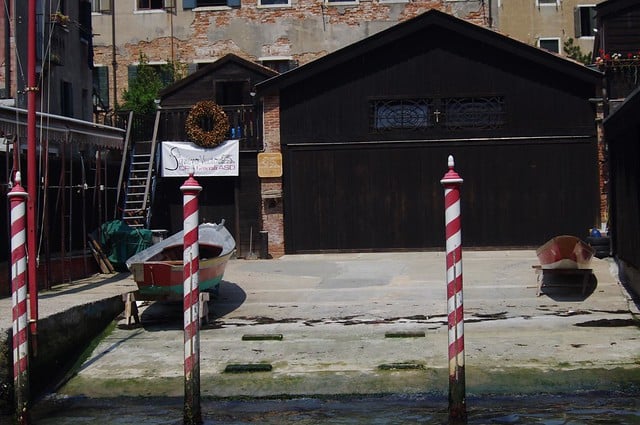 San Trovaso is the city’s longest continually operating squero, documented as far back as the late 1600s. Today it is owned by the city of Venice and operated by a co-op of specialized artisans who make new gondolas and refurbish old ones. The boatyard takes its name from the San Trovaso church that stands alongside of it. An unusual feature is the architecture of the main squero residence, which is more typical of buildings in the mountainous Cadore region, the area from which seasoned wood was once shipped for use in constructing gondolas. Group visits may be arranged in advance via the website.

While there are a handful of family-owned squeri in Venice and its outlying islands still making and repairing gondolas using modern power tools, the Tramontin family has distinguished itself for preserving an essentially handmade process. Roberto Tramontin learned the gondola-building trade from his father, Nedis, who inherited a family business begun in 1884 on the site of a historic squero. However, since Roberto’s death in 2018 the family business has now been passed down to his two daughters, Elena and Elisabetta. These two young women are challenging the traditions of a dominantly male run industry and determined to keep the family business running into its 135th year. Perhaps they can pave the way for more women to work in this unique and historical industry. You can appreciate the setting of the squero from the water, but visits should be arranged in advance.

Here you can watch a recently released BBC clip about these gondola-making sisters.

The famous “Barbari map,” an enormous woodcut by Jacopo de Barbari dating from 1500, shows an aerial view of Venice that gives us an appreciation of the huge number of squeri in the city at that time. No longer used as boatyards, most of these historic squeri have become residences, storage facilities, and commercial spaces. However, if you know how to spot the characteristic features of the squero — the boathouse open to the canal, and the ramp leading gradually into the waters — you’ll begin to recognize these disused squeri all over town.

The best way to appreciate them is by boat. Look for them along the waterways of Canareggio and Dorsoduro, and also along the Zattere. Here are a couple of notable former squeri that are easy to spot:

Squero Dal Mistro
Corte dei Muti
Canareggio
If you take a boat ride along the Rio della Sensa, you can see the ramp leading into the canal from the old Squero Dal Mistro. No longer operating as a squero, some of its boats and artifacts have been preserved by the nonprofit organization Arzanà.

Squero ai Servi
Calle delle Pignatte, 1936/d
Canareggio
In existence for some 500 years, the Squero ai Servi is no longer making boats. However, you can still recognize the squero from the canal side. Today it is the headquarters of the nonprofit association Arzanà (see below), which seeks to preserve historic Venetian boats.

Makers of Oars and Oarlocks (Remeri)

Makers of oars (remi) and oarlocks (fórcole) were integral partners to the gondola makers, as steering a gondola without the characteristic oarlock would be nearly impossible.

Originally a simple wooden fork, the Venetian fórcola evolved over the centuries into a complex, high-precision instrument that allows the gondolier to maneuver the single oar into countless different positions, and easily navigate narrow, crowded canals by rowing from one side. Fórcola makers, or remeri, developed as specialized craftspeople apart from the other trades. Today some connoisseurs collect and display these elegant sculptural works as standalone art objects.

Brandolisio occupies in an evocative old workshop that once belonged to Giuseppe Carli, a celebrated Venetian oar maker who passed away in the late 1990s. In addition to standard oars and oarlocks, Brandolisio also crafts beautiful wooden sculptures and takes on commissioned work. His studio is located to the east of the Basilica San Marco, just a stone’s throw away from the Piazza San Marco.

Furlanetto has mastered the sculptural possibilities of this uniquely Venetian form. Furlanetto follows traditional methods of carving Venetian oarlocks from seasoned trunks of walnut, cherry, or pear wood, releasing their curvilinear forms and polishing the finished pieces to a high sheen.

At Saverio Pastor‘s workshop near the Guggenheim Museum, you can not only watch the master work, but you can also purchase a scale model of an authentic fórcola (or even a fórcola bookmark), or spend much more for a larger-than-life fórcola sculpture to display in your home or garden.

An historian of Venetian boats, Gilberto Penzo makes intricate small-scale models of gondolas and other types of historic lagoon boats. His studio is a fascinating jumble of books, documents, boat models, blueprints, and other maritime paraphernalia that any boat enthusiast will appreciate. His laboratorio is located between the Campo San Polo and the church of the Frari. This is a great place to pick up an authentic gondola souvenir, more portably sized.

Years ago several gondola prow forks, dating probably from the 1600s, were pulled from the canal waters. You can admire their beautiful curvilinear profiles at one of the main civic museums of Venice, the Museo Correr. This intriguing museum began with the private collection of Teodoro Correr, a member of an old Venetian family and a passionate collector of Venetian historical objects — everything from paintings to coins, nautical instruments, arms and armor, and other fascinating miscellanea.

Inside the Church of San Trovaso stands an altar completed in 1628 and dedicated to the gondola makers’ guild. If you look carefully you will see a carved image of a gondola, complete with its prow forks (ferri) and passenger compartment (felze).

Arzanà is a nonprofit organization dedicated to the preservation and restoration of historic Venetian boats, including gondolas. They have a fascinating collection of boats and gondola fittings, including oarlocks, ropes, oars, upholstery, ferri and other vestiges. The offices and collections are not open to the public on a regular basis, but private visits may be arranged in advance by email.

Founded in 2002 by the oarmaker Saverio Pastor, El Fèlze is an association of artisans involved in the various gondola-making trades. Although they do not have an office open to the public, El Fèlze can provide information and help facilitate visits to specific studios.

Feast of the Redeemer (Il Redentore)
Third Sunday in July
This procession of the city’s historic gondolas commemorates the end of a plague epidemic that struck Venice in the 16th century. The boats and their rowers parade through the canals bedecked in finery, and it’s a great chance to see a large number of historic lagoon craft.

Regatta (Regatta Storica)
First Sunday in September
This popular race includes four categories of rowers — youths, women, rowers of a canoe-like craft called a caorlina, and gondoliers. Prior to the race you can watch a procession of historic gondolas with rowers dressed in Renaissance costume.

Finally, as you wend your way through the narrow alleys of Venice, keep your eyes out for street signs that recall the historic locations of gondola-makers and their related tradesmen. Many street names in Venice contain the words squero, squeri, remer, felzi or traghetto (ferry station), a potent reminder of the boatbuilding trades that once kept life in the Most Serene Republic gliding along at a steady clip.

Laura Morelli is an art historian and the author of Made in Italy. Her latest book, a work of historical fiction set in 16th-century Venice, is entitled The Gondola Maker. Find out more at www.lauramorelli.com.