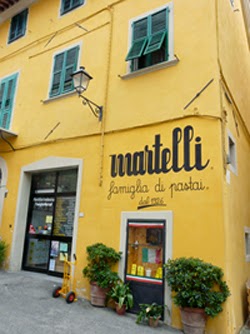 This article appeared in a previous issue of Dream of Italy.

Dino Martelli can be forgiven for interrupting our conversation every five minutes or so. He has to move the pasta and today, like many days here at Pasta Martelli in Tuscany, he’s the only one minding the 60-year-old machines at the small factory his family has run for 88 years. Martelli, sporting a factory coat in his company’s trademark bright yellow, has an internal clock of sorts alerting him when to move a row of freshly crafted spaghettini from the extrusion machine to a drying rack. (Martelli produces four pasta shapes — spaghettini, spaghetti, penne and maccheroni — each day of the week is devoted to producing a certain shape.)I’m here in the town of Lari, in the shadow of a 12th-century castle, to see where the pasta many call “Italy’s best” is born. It’s certainly deemed the best by some of Italy’s most famous restaurants. La Pergola, Rome’s Michelin-starred restaurant, serves Martelli pasta. This pasta is a true artisanal product.
Read the rest of the article